Posted By Shubhankar Parijat | On 29th, Aug. 2019 Under Article, Reviews

No one will ever say the people at Milestone don’t know or love their bikes. They’ve been making games with bikes for years and years, from the more arcade-oriented experiences to ones that cater exclusively to the hardcore crowd, and everything in between, and they ever fail to cram their games full of love and attention for their beloved two-wheelers. MXGP 2019, this year’s officially licensed FIM Motocross World Championship video game, displays a similar love for bikes- sadly, it doesn’t feel the need to do much else. 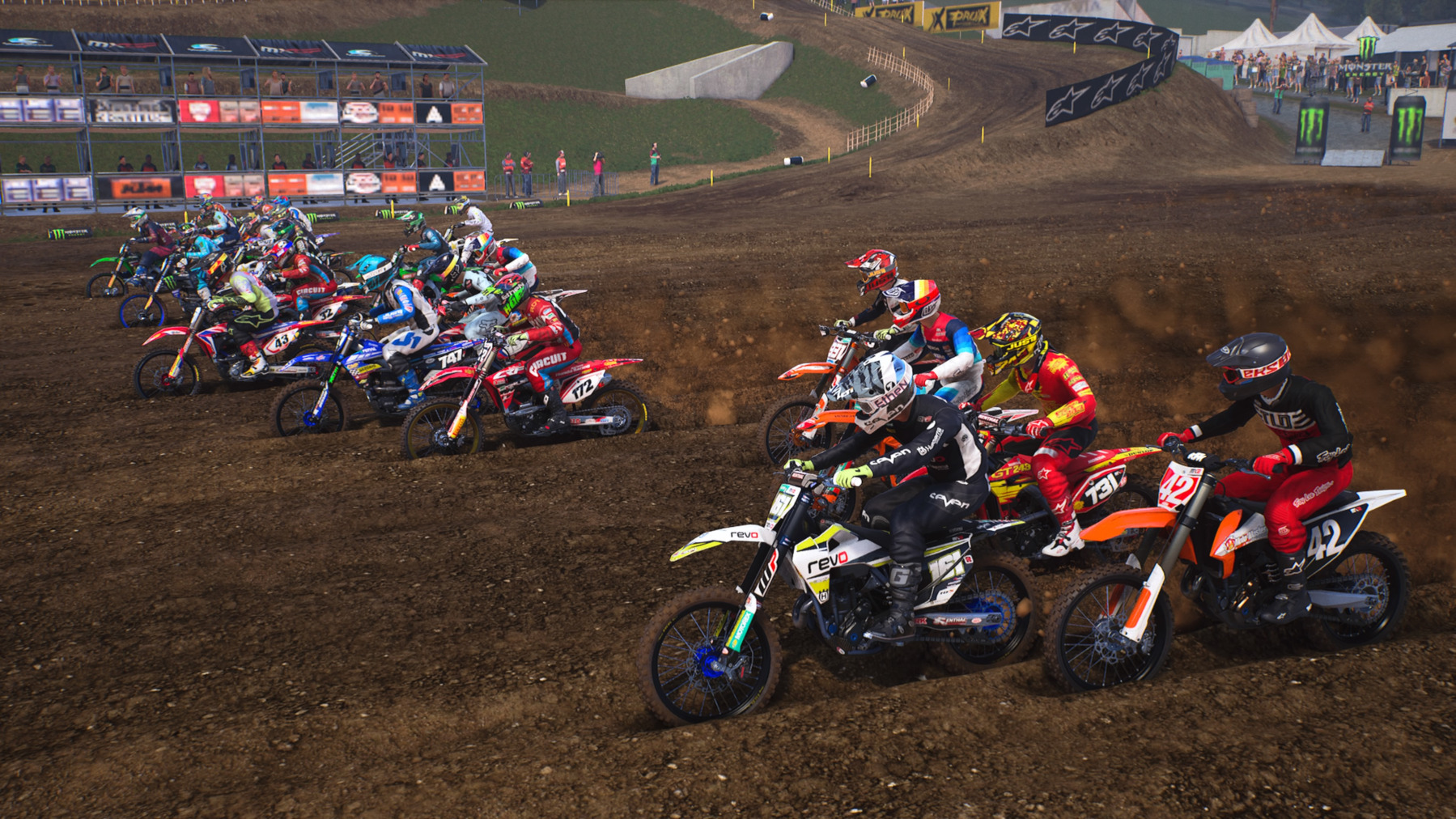 "MXGP 2019, this year’s officially licensed FIM Motocross World Championship video game, displays a love for bikes- sadly, it doesn’t feel the need to do much else."

Let’s begin with what’s good- and unsurprisingly, what’s good here is the simulation, the physics, and the actual mechanics that determine every second of the gameplay when you’re riding your bikes around the game’s tracks and obstacle courses. Owing to its very nature, MXGP 2019 is, as it should be, heavily dependent on physics- thankfully, those physics are solid here, which means the actual foundation of the game is more than just functional.

Handling feels appropriately weighty and solid, and the bikes interact with the grimy terrain of the tracks as they should. During the course of races, knowing when to accelerate and when to decelerate, managing and properly using the front and rear brakes, and shifting the weight of the driver during turns or while in the air all come together for a fundamentally solid sim experience.

There’s plenty of challenge to be found here, and for the uninitiated, the early goings in MXGP 2019 won’t be much of a cakewalk. Even with some generous assists on, the opposing AI and the general physics of the game might take some getting used to, though there is a handy rewind function to balance things out somewhat. For the enthusiasts, taking all the training wheels off and playing without any assists should provide a thrilling experience.

Track design is also generally quite good, and what makes it even better is track degradation, which Milestone seemed to have honed to near-perfection with MXGP 2019. Tracks visibly get more wear and tear as races progress, which means that each progressive lap requires you to pay attention to the game more and more. Meanwhile, weather effects also add to this dynamism, and the final lap of a race with a degraded track full of puddles after rainfall can be a tricky experience. 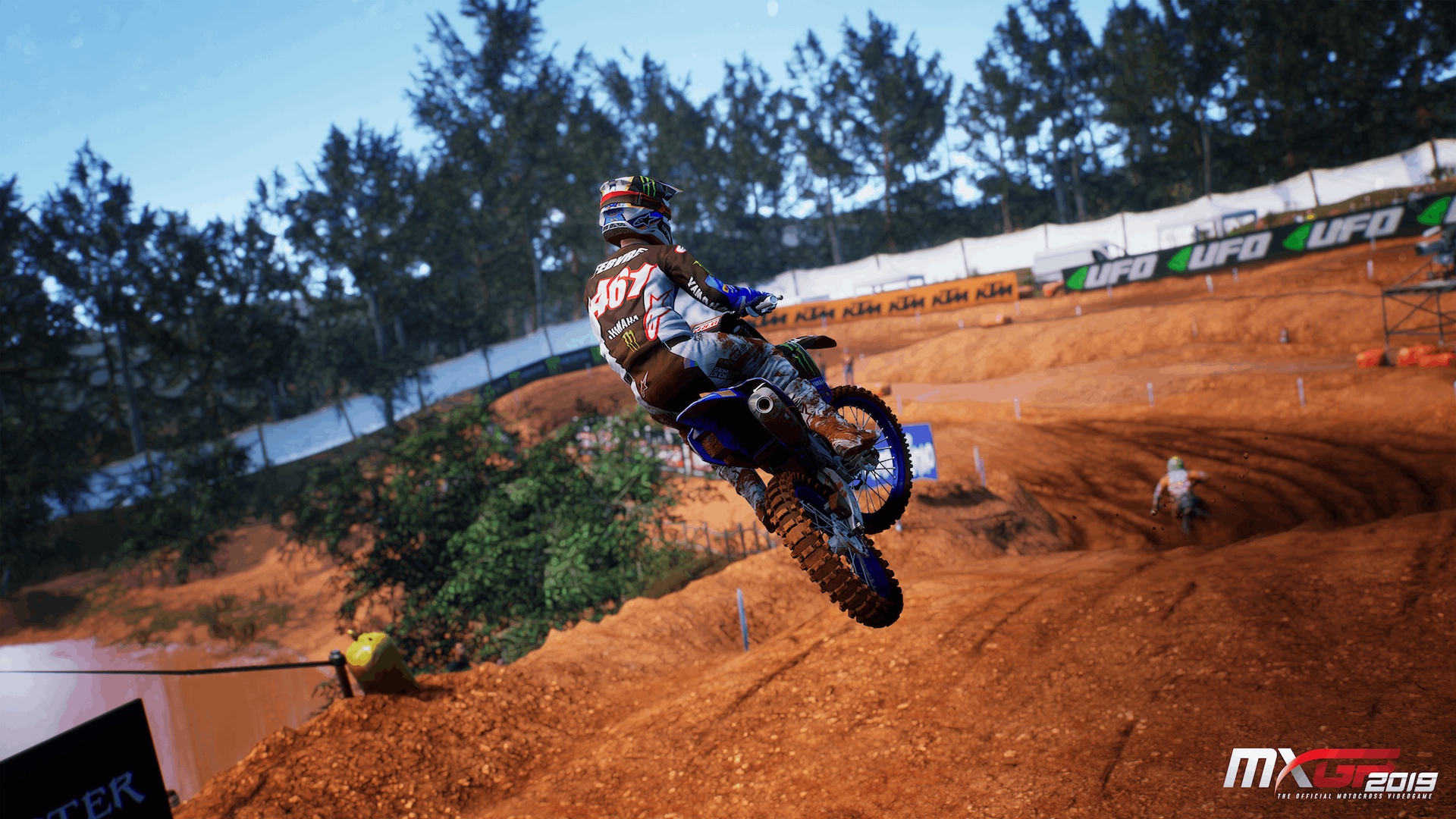 "Owing to its very nature, MXGP 2019 is, as it should be, heavily dependent on physics- thankfully, those physics are solid here, which means the actual foundation of the game is more than just functional. "

But though the core of the experience is built upon solid foundations, MXGP doesn’t have much else going on. For starters, there are very little progression mechanics to speak of. Progression in the game is unified, in that you earn experience points to contribute to your prestige level no matter where you finish races. And sure, the credits that you earn from races can be used to purchase customizations from a pretty decent range of options, which also offers cosmetics for both your bike and your rider.

But beyond these customizations, there’s no actual progression. There’s no meaningful goals or rewards to work toward, levelling up doesn’t feel like it’s doing anything tangible, and it feels like all you’re supposed to do deck out a bike with the best possible components and then move on to purchase another new (and better) bike, and the start afresh. For some, that might be enough, but I imagine many might find it harder to invest time and effort into the game due to the lack of meaningful progression.

The career mode also feels similarly barebones. You start out with either a sponsor or a team, and begin in the junior seasons, constantly making your way up to the senior championships. Each season sees you completing a set number of races, before allowing you to move on to the next rung, but that’s really it. You’re really just going from race to race. If you had any hopes that the career mode might also come with some management aspects worth caring about, prepare to have those expectations dashed.

Outside of the career mode, MXGP 2019 makes a couple of notable additions, which are, by and large, successful new experiments for developers Milestone. The most notable one is the track editor, which has a surprisingly versatile suite of creation tools. The level of customization on offer here is impressive, and the game allows you to really finetune the kind of track you want with these tools. 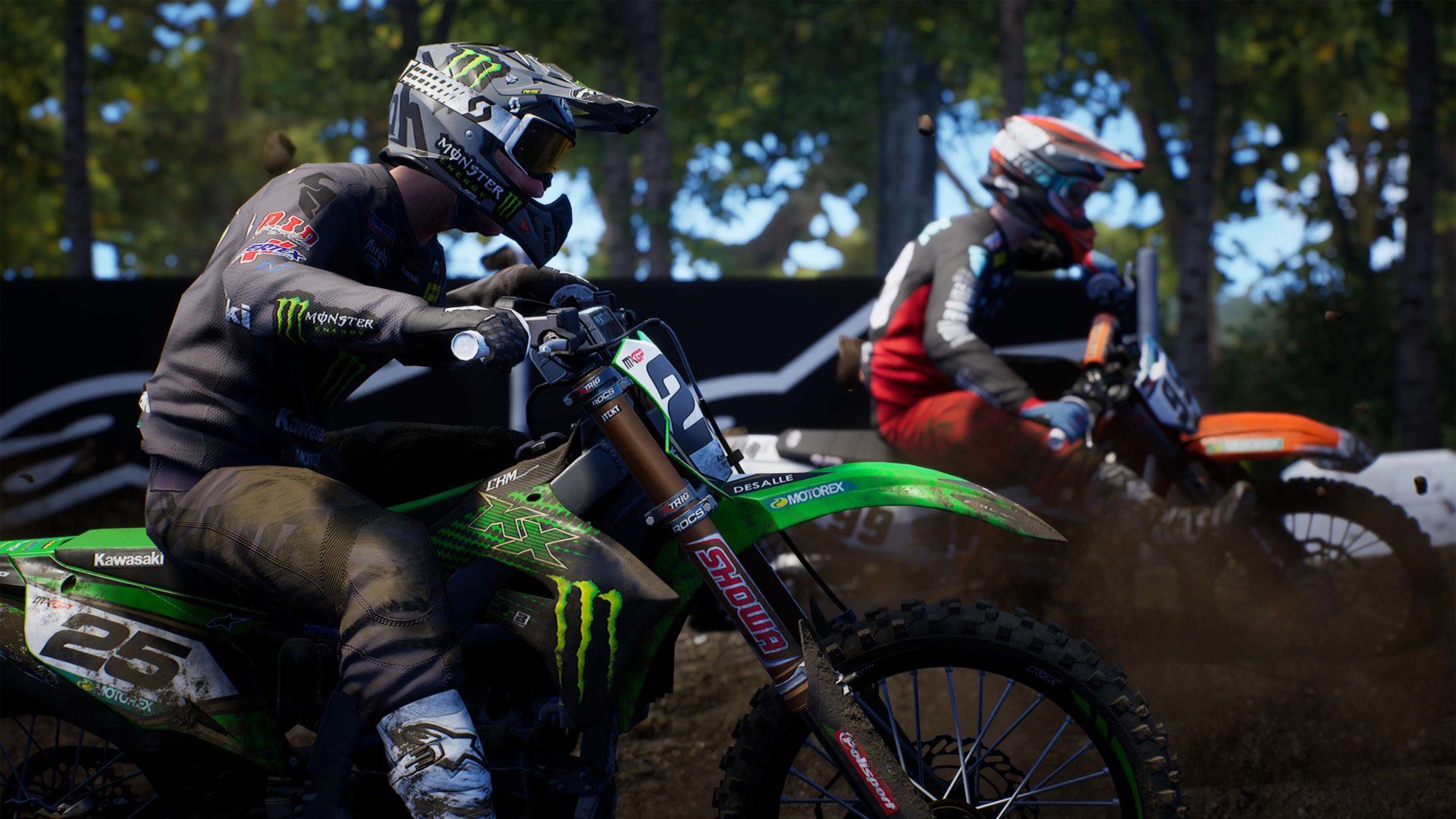 "Though the core of the experience is built upon solid foundations, MXGP doesn’t have much else going on."

Creating tracks is fun and easy, and I imagine it’s something that many will get a lot of enjoyment (and gameplay hours) out of. Once you do create tracks though, the game sends an AI driver through your course, who has to clear the course within three minutes before it can be verified and uploaded online. It’s a neat quality-assurance idea, and I get its purpose- the issue is that this entire time, you’re stuck just staring at the screen and watching the AI drive through your course. It probably would have been better to get the creators of the tracks themselves to attempt to clear their own creations that way, similar to what other creation-focused games (like, say Super Mario Maker) do.

The other big addition is the Playground, which is a decently sized open world (ish) arena for you to drive around in. The Playrgound serves multiple purposes- it’s an area for you to just relax and ride your bike in without any restrictions or requirements, just enjoying the scenery and exploring the location. It’s also, by it’s very nature, a great place to practice and get to grips with the game’s mechanics.

More importantly, the Playground also houses several events, from races to time trials, which you take on by simply driving to waypoints scattered throughout the map. They’re an extra dose of content, which is always welcome. Something else that’s welcome is the ability to create your own races in the Playground by setting waypoints, which has the potential to produce some very interesting user-generated content that can add to the game’s replayability. Of course, that depends on the community and how much it likes and interacts with the feature in the coming months, but if it takes off, it might become one of MXGP 2019’s best new additions.

From a presentation perspective, MXGP 2019 is an unremarkable game. Menus have seen a noticeable facelift, and the visuals do justice to the game’s ambitious track degradation (for the most part), while performance is also consistently solid. That said, given that the game is built by a relatively smaller sized studio, you shouldn’t expect AAA-level of sheen and detail from the visuals (some textures and distant objects can look glaringly muddy and/or blocky). The game also consistently comes up short in terms of drumming up the excitement that one would expect from such a motorsport event, whether that’s because of non-existent commentary, unenergetic music, or repetitive and unenthusiastic camerawork. 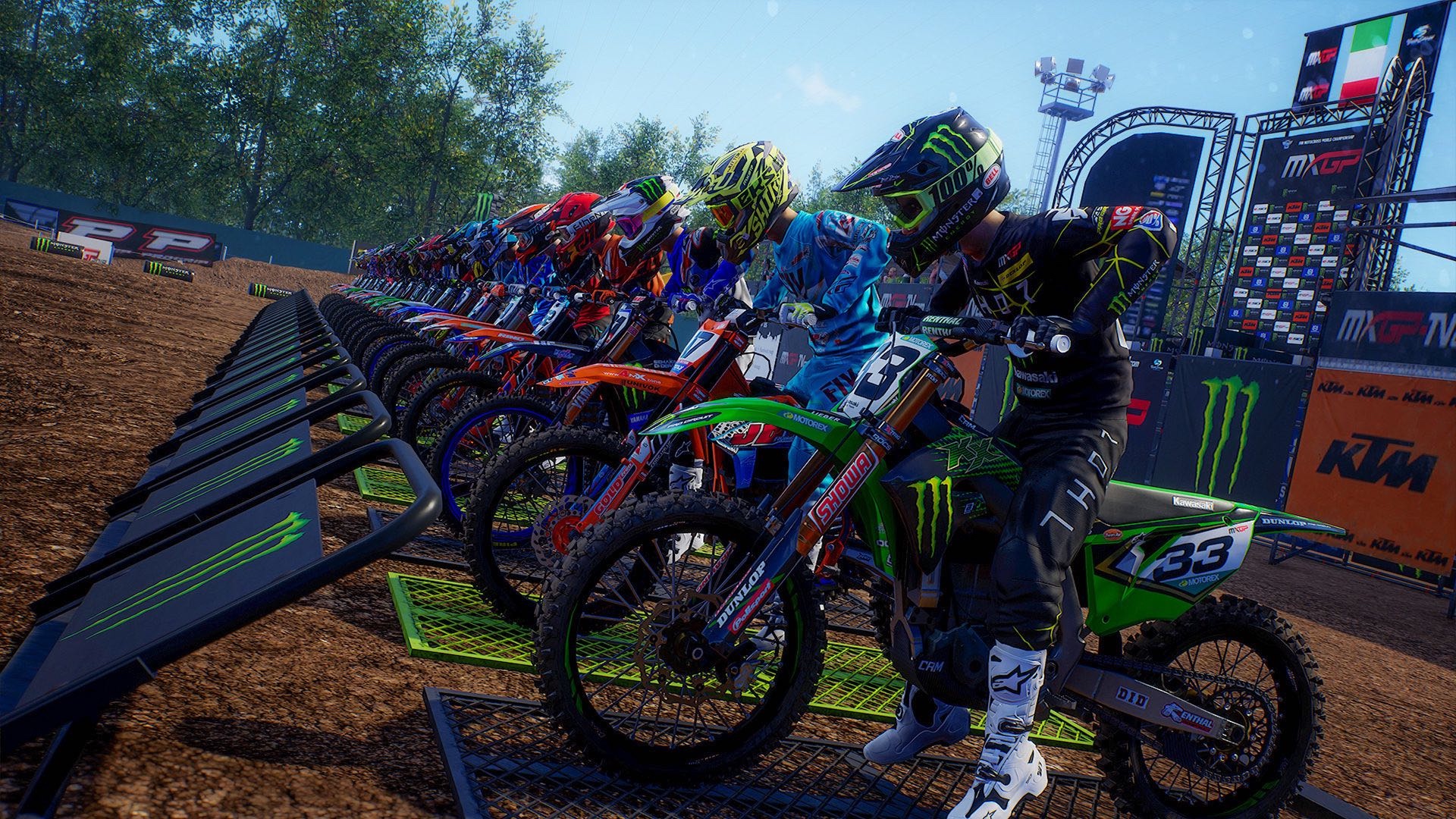 "From a presentation perspective, MXGP 2019 is an unremarkable game. "

MXGP 2019 is a solid enough simulation game, to the extent that those who’re looking for an authentic motocross simulator will most likely be happy enough with what it has to offer. That said, though the game has a solid foundation, it doesn’t really build much stuff on top of that foundation. Lacklustre presentation, a barebones career mode, and the lack of meaningful progression end up making this feel like an ultimately bland experience.

Hardcore motocross enthusiasts might find some enjoyment here, but others might want to look for greener pastures elsewhere.

A copy of this game was provided by developer/publisher for review purposes. Click here to know more about our Reviews Policy.
Tagged With: milestone, mxgp 2019, pc, ps4, Xbox One