A common blight with annual sports games is they frequently exhibit only minor updates with each iteration. MXGP 2021 is largely the same as last year’s official motocross videogame, so whilst there’s plenty to get to grips with for MXGP newcomers, series veterans will likely be left frustrated with nay so much as a fresh coat of paint in developer Milestone’s latest motocross sim.

As MXGP 2021 is the only officially licensed motocross racing game, it’s the only way to experience the real-life tracks, riders and official race bikes which comprise the motocross championship. You’ll have access to numerous game modes from the outset – career mode, which Milestone state is “renovated” with career path decisions having specific importance, and a quick play mode where you can try your hand at time attacks, a grand prix and championship rounds away from career mode. All the game’s tracks appear unlocked and playable, so it’s great you’ll get chance to practice in one of the three quick modes before committing to an attempt in your career. There’s also a free roaming playground mode and track editor.

If you’re a newcomer to MXGP then you’ll need to spend some time practicing. The physicality of the bikes and how they handle on the low-grip muddy race surface is designed to feel realistic, so will take a bit of getting used to. There’s a brief tutorial race with controls highlighted on screen but as far as I can see it doesn’t tell you anything which you can’t learn by reviewing the game’s control settings. Becoming a successful rider requires you deftly balance steering, driver weight distribution and throttle control. See, you can’t just gung-ho round the racetrack – the mud is heavy, its low grip feels like steering through treacle, and it’s super-slippery when wet. 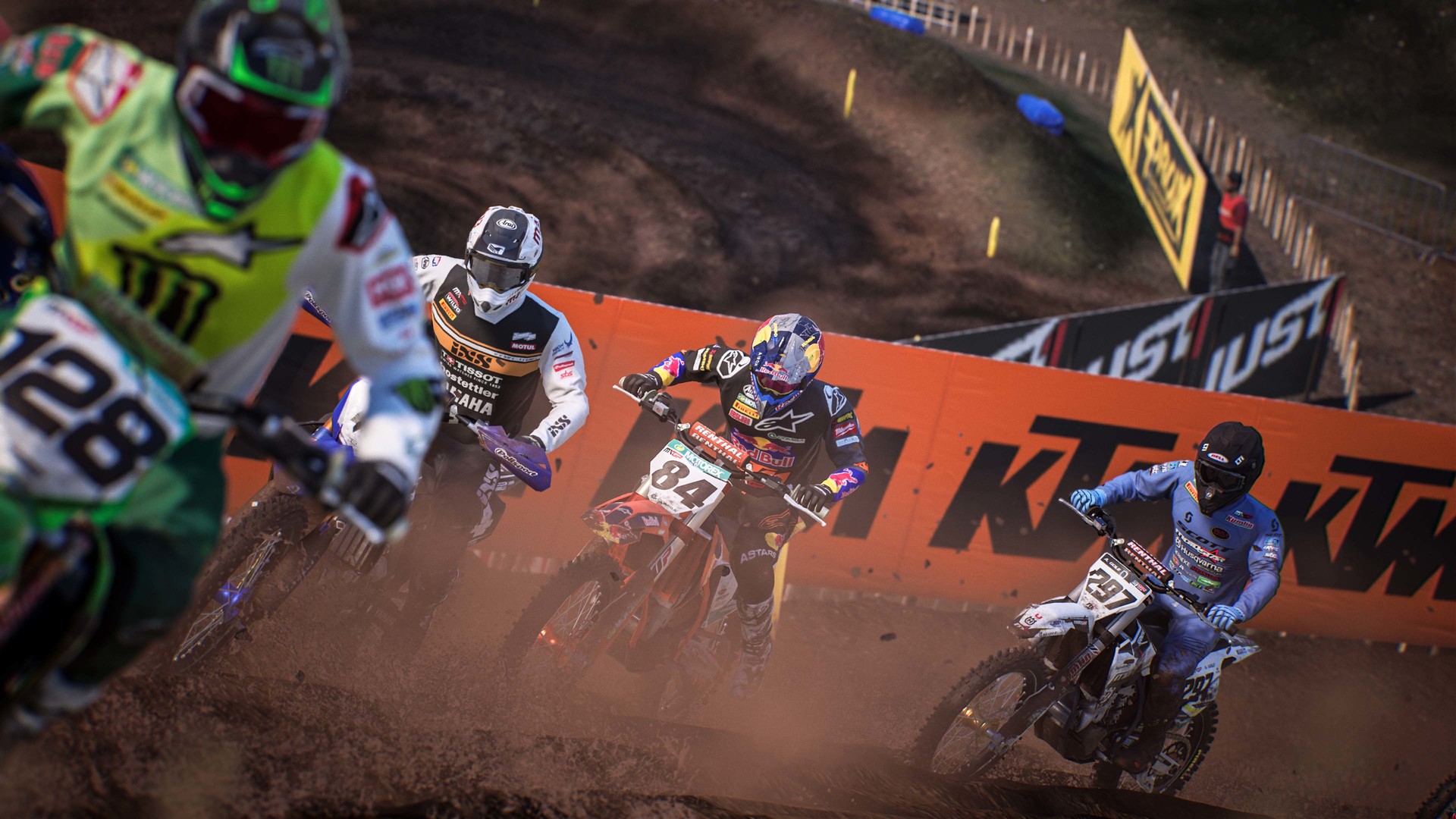 "MXGP 2021 is largely the same as last year’s official motocross videogame, so whilst there’s plenty to get to grips with for MXGP newcomers, series veterans will likely be left frustrated with nay so much as a fresh coat of paint in developer Milestone’s latest motocross sim."

Finishing high in the pecking order requires you develop a steady approach to cornering. In short: take your time. It’s very easy to lose control if you accelerate too hard and too early out of a corner. Get into the swing of the bike’s handling and perfectly time your rider’s lean just as you push out of a tight corner and its remarkably satisfying. That being said, you will bail over the handlebars – a lot. And sadly, falling off the bike – or any event resulting in a respawn – can be immersion breaking. You respawn almost immediately after your rider comically flies like a rag doll into the track’s advertising. Jarringly, you’ll also respawn immediately if you accidentally cut a corner or miss a jump or obstacle. Personally, if I missed a corner, I’d prefer to be penalised in another way – a few seconds added to my total race time for instance. There’s been times when I’ve respawned onto the racetrack, right into an opponent’s racing line and sent them flying. I can only imagine how infuriating this will be during online multiplayer.

Perhaps incongruent to my time penalty suggestion is the optional but admittedly quite useful ‘rewind’ feature. Hitting the assigned button on your controller will rewind time, giving you a fresh opportunity to successfully navigate an obstacle without running out of road. Purists might argue the ‘rewind’ feature results in artificial racing – and by and large I’d agree. However, at the early stages of your racing career it’s a welcome addition that’ll save you a lot of frustration.

Setting your bike up pre-race for optimum performance will be an appreciated feature for motocross and bike enthusiasts. You have options to adjust your bike’s suspension, gear ratios, and wheelbase length as well as mapping your accelerator and brake response. Whilst the setup system isn’t as deep as car tuning in a game like Forza Horizon 5, it has potential to be overwhelming if you’re not technically minded. Sure, each adjustment is explained, but I still found it hard to understand which setup would deliver the best performance for me on the next racetrack. So, with this in mind it’d be beneficial if Milestone could have added bike setup pre-sets as a starting point for riders like myself.

This is especially important as it appears adjusting your bike for optimal performance is vital to giving the edge you need for competing at the front. Even with my opponent AI set to ‘very easy’, I still found myself oftentimes lagging in the middle of the pack after a decent first lap fighting for the podium. After experimenting with various bike setups, I was able to regularly compete at the business end of the standings – albeit still on the easiest AI setting.

"Finishing high in the pecking order requires you develop a steady approach to cornering. In short: take your time."

At this review’s outset I mentioned Milestone’s promise to integrate the importance of career path decision making. In fact, they state your reputation as a rider depends on it. From my experience, having spent a few hours on the career mode, I’m a little lost as to how my decisions thus far have had any tangible effect. You see, you select which team you’d like to race under contract for when competing in the various stages of the motocross championship. You’ll level up as a rider whilst gaining experience points to spend on outfits. There’s plenty of helmet and visor designs in the game shop with which to spend your EXP. From what I can see, they’re superficial changes only with no effect on race performance whatsoever. You can’t customise the appearance of your bike if you’re under contract to the team either, which is a shame.

As this is motocross, mud-heavy tracks with sludgy corners mixed with exhilarating verticality and huge jumps are the name of the game. There isn’t much in the way of track variety, but each track offers a reasonably technical challenge. Certain corners provide different trajectories, with hunks of mud slapped in the middle which you’ll need to avoid. The bike’s engines sound throaty and guttural too, so whilst the game’s graphics aren’t spellbinding, they’re adequate when taken in with the game’s sound design.

There’s reasonable mud splatter on screen suggesting the unpleasant experience of dirt flinging into your face. Changeable weather effects such as heavy downpours mid-race provide a richer visual experience – with reflective mud puddles splashing rainwater across your screen. It really is quite effective at conveying the sodden feeling of an unpleasant rain shower. And the bike becomes harder to manoeuvre in the wet, requiring gentler throttle feathering for fear of sliding off track. It’s a shame that the graphically enhanced inclement weather doesn’t extend to your rider appearing muddier as the race goes on, nor do tread marks on the track evolve. There’s a hint of tread track left in your wake, but it’s only noticeable on the race replays.

Pre-race load times are often quite long. I’m regularly waiting up to a minute on my PS4 Pro for the track to load. When racing though I’m pleased to report there are no noticeable performance issues or frame rate drops, overcoming a problem I believe blighted MXGP 2020.

There is a degree of fun to be had in the other game modes too, but there isn’t a lot of content here. Playground mode offers something different to the standard race modes, with opportunity to explore a section of Welsh countryside – free-roaming through rugged terrain and dense forests complete with castle ruins. It’s a great opportunity to try out the more challenging game settings, such as ‘advanced’ (read: more realistic) bike physics simulation instead of the ‘standard’ default physics. There’s also a couple of assist modes such as rider weight distribution or automatic transmission which you can try disengaging in the playground – you’ll notice the difference. 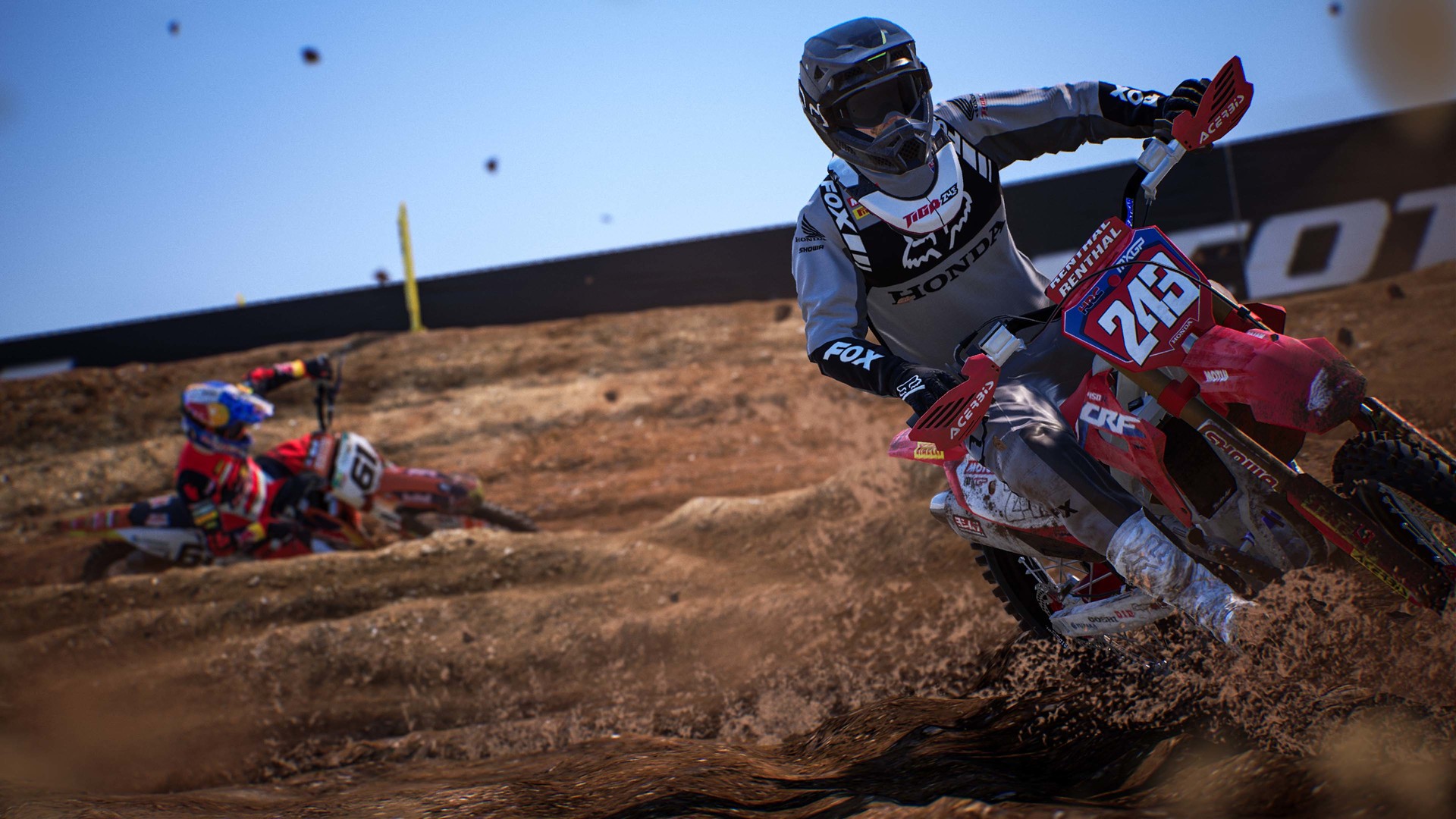 "If you’re new to the MXGP series and a fan of physics-based racing simulators, then there’s a lot to appreciate with MXGP 2021 – just don’t expect the level of depth you’d get from a DiRT Rally or Gran Turismo title."

Whilst the playground exploration is entertaining, it can also feel a little clumsy at times. As alluded to earlier, your bike becomes unsteady at slow speeds. As a result, navigating my way up the tight staircase of the castle ruins wasn’t as fun as expected as my bike kept unexpectedly flailing, its rear end fishtailing like a salmon out of water.

The final game mode, the track editor, allows you to create and upload your own difficult track designs. The system is reasonably intuitive with a choice of four landscape types with which to plonk down your slabs of mud in any arrangement you see fit. This mode does need a little polish when it comes to testing your track – there’s no map in your HUD, and limited indication for the edge of your track. There doesn’t appear to be any way to amend a section mid-way through your track either if you decide the topography would suit a jump instead of a corner. Hopefully a patch will come through from Milestone, allowing players to get more mileage out of this promising game mode.

At the end of the day, if you’re new to the MXGP series and a fan of physics-based racing simulators, then there’s a lot to appreciate with MXGP 2021 – just don’t expect the level of depth you’d get from a DiRT Rally or Gran Turismo title.

Final Verdict:
FAIR
MXGP 2021 is more of the same from Milestone’s marquee motocross experience.
A copy of this game was provided by Developer/Publisher/Distributor/PR Agency for review purposes. Click here to know more about our Reviews Policy.