Flawed but a fun game.

Posted By Shubhankar Parijat | On 10th, Mar. 2014 Under Article, Reviews

The NASCAR franchise has seen nothing but turbulent times since it was first formed. Its first installment was panned heavily, and while future installments improved on the miserable first outing in several ways, the racing simulation series never quite lived up to the expectations of the rabid fans of the sport. NASCAR 14, the fourth installment in the franchise developed by Eutechnyx, tries to give the franchise a breath of life with some serious changes, but while it makes some significant improvements and is a much better game compared to its predecessors, it still fails to live up to the bidding. Make no mistake- NASCAR 14 can be enjoyable at times, but that is as much praise you will get out of anyone for the game.

The biggest fault of any NASCAR game- well, one of the several big faults- so far has been the stupid and unrealistic AI. With NASCAR 14, developer Eutechnyx has largely done away with the issue. The AI in NASCAR 14 is a lot more aggressive than it has been in previous installments, and when you’re racing against computer controller opposition, you get the feeling that they actually competing for a win. Strategizing becomes that much more important due to the same reason, and makes the game much more fun and multi-layered in more ways than one. 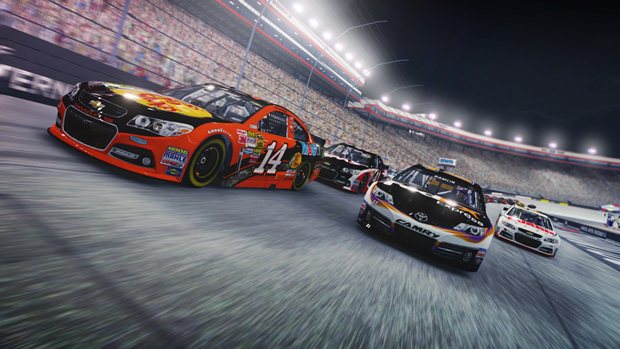 "As any good racing sim should be, NASCAR 14 provides gamers a fair bit of challenge. Especially if it's the career mode you're playing."

However, the AI hasn’t been perfected completely. There are still some niggles that riddle the races of NASCAR 14- your competitors will crash and collide with you, no matter what lap of the race you’re currently on. Whether you’ve just started the race or are just a few dozen meters away from the finish line, your opponents will always drive forward with the same menacing mentality. While this gives the game a sense of urgency at times- which is oftentimes much appreciated, given how exciting it can make things- it makes for some unrealistic situations during races and can detract from the experience if you’re looking for realism and authenticity in vein of the Forza and WRC games.

This linear thinking pattern of the AI drivers also results in a bit of monotony later on in the game, and not only does it make the game a little boring as time wears on, it also gives you an unfair advantage no matter what difficulty setting you’re playing the game on. After a few hours, you’ll have memorized the way and patterns your opponents move in, and you’ll be beating them and winning races not because of skill, but, in large part, because you know what your opponents will do and when they’ll do it.

That doesn’t mean the game is easy, though. As any good racing sim should be, NASCAR 14 provides gamers a fair bit of challenge. Especially if it’s the career mode you’re playing. The career mode has been revamped in NASCAR 14, and you’ll be playing in an entire season, playing in races and practicing, earning money and building your dream car and crew to help you through the season. In the initial stages, the races are rather tough, simply because your car isn’t as good as those of your opponents, which means that strategizing is very important in these stages. However, as time goes on and you get better cars to drive, racing becomes a lot more balanced and, as a result, enjoyable. 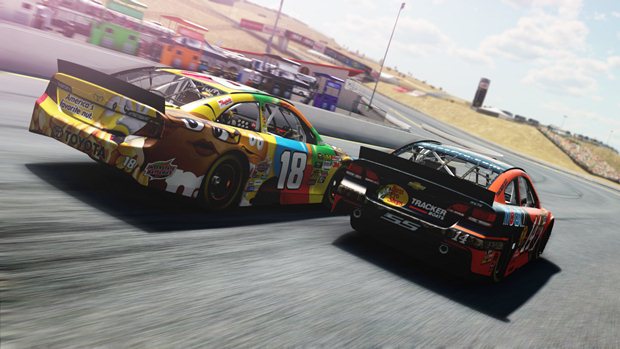 "NASCAR 14 is, by all means, a huge improvement over its predecessors, and developer Eutechnyx have certainly set up a solid foundation to build its future games on."

When you’re not playing offline, you can head over online to play against your friends, either in a similar season setup or in single races. Online racing is extremely fun in NASCAR 14, largely because you don’t have to deal with the finicky AI. While there’s not as much complexity or depth here to keep you coming back as there is in the career mode offline, there’s still plenty of fun to be had while playing with your friends and you’ll find yourself playing online for several hours.

The technical side of the game is also a little iffy. The sound effects are, granted, very well done and give the game a nice, authentic feeling during races, pit stops and customization sections. Even the menus are crisp and clean. However, the visuals of the game themselves are a bit off the mark. While they’re not terrible or downright ugly by any means, they’re not up to the level of contemporary racers or contemporary HD video games in general. The textures get blown up and heavily pixelized when zoomed in on, and the frame rate stutters at times. The effects and the physics themselves are often hilariously inappropriate (a car spinning out of control at the slightest touch then balancing itself perfectly mere seconds later, for example), and glitches run aplenty. There’s certainly not enough of these technical errors for them to be a massive hindrance, but you do notice them and they do get in the way of your enjoyment.

NASCAR 14 is, by all means, a huge improvement over its predecessors, and developer Eutechnyx have certainly set up a solid foundation to build its future games on. They haven’t, however, managed to squash out all the faults and errors of the game, and as a result, NASCAR 14 is a flawed yet fun game that fans of the sport and the genre might want to try out.

AI is still patchy; Outdated visuals; Iffy physics; Lacks identity; Gets boring after a while; A bit too unrealistic at times.

Eutechnyx have tried to revitalize the NASCAR franchise, but while they have admittedly made some big steps towards that goal, NASCAR '14 still falls short on many fronts.

A copy of this game was provided by developer/publisher for review purposes. Click here to know more about our Reviews Policy.
Tagged With: Deep Silver, eutechnyx, nascar 14, pc, ps3, xbox 360