While NASCAR games have never really been known for having a lot of variety, either in gameplay or presentation, I still couldn’t help myself from wanting more out of NASCAR 21 Ignition. It doesn’t do anything particularly wrong, though. In fact, the core racing of Ignition is pretty good. But for the full asking price of $60 it’s a rather bare-bones affair. A small handful of rough edges don’t help things, either.

NASCAR 21 Ignition is a chance for a much-needed fresh start for the series. With the long-time developer of the series, 704 Games, no longer at the wheel, Motorsport Games has taken over development on Unreal Engine 4 instead of just hanging back in the publisher role. Given this, and Motorsport Games’ history with the series, you’d think NASCAR 21 Ignition would be the reboot the NASCAR franchise deserves. A fresh new start that might even help getting a new generation interested in NASCAR – something the sport desperately needs. While it brings me no joy to say that this game falls decisively short of that, Ignition is a reasonably competent NASCAR game at the end of the day.

"A fresh new start that might even help getting a new generation interested in NASCAR – something the sport desperately needs. While it brings me no joy to say that this game falls decisively short of that, Ignition is a reasonably competent NASCAR game at the end of the day."

You have a few different ways to play here. The career, where you practice, qualify, then race through the games many tracks and build up reputation is the meat and potatoes. After you select your team and your contract, you’re literally off to the races, where you can begin practice laps and actually racing. Quick races are also here, and they don’t impact your career so they’re a nice option where you can change the small handful of modifiers and get right into the action with little to no consequences. You also have a multiplayer mode which I wasn’t able to really test out prior to launch. It’s a thin-but-serviceable number of ways to play, for a NASCAR game, anyway. Another mode or two that mixed things up a bit would have gone a long way to making the experience feel a little fuller, but what’s here will likely satisfy NASCAR fans for at least a dozen hours or so.

Driving feels good and responsive. It’s not as steep of a learning curve as some newcomers might be bracing for, and can really fall into place quickly given the simplicity of the tracks in NASCAR. It’s not without its nuances though. The subtle give and take of falling slightly out of alignment with the suggested route putting you just a tad out of sync with your opponents and the many tense moments of deciding whether to go for a pass or play it safe are appropriately touch-and-go. In short, it’s good, despite the slightly annoying crew chief constantly yammering the same few phrases in your ear.

Getting in the zone and staying there is easy and fun, it’s almost even a bit too arcadey, as I was able to spin out other drivers with a pit maneuver a little easier than I probably should have been. Not complaining about that though. What I will complain about however is the slightly-more-than-excusable amount of glitching out that the game would suffer from as I tried to start new events. Sometimes it looks like you’re stuck in the seat of a car before heading out to the track, and sometimes it glitches out on the track itself. Neither thing happened enough to be a total deal breaker, but they did break the game multiple times for me and required a hard close and restart. The racing of course, when it does work, changes accordingly based on your preferences with steering tightness, brake assistance, and other things, all of which you can alter on your data pad before each race. 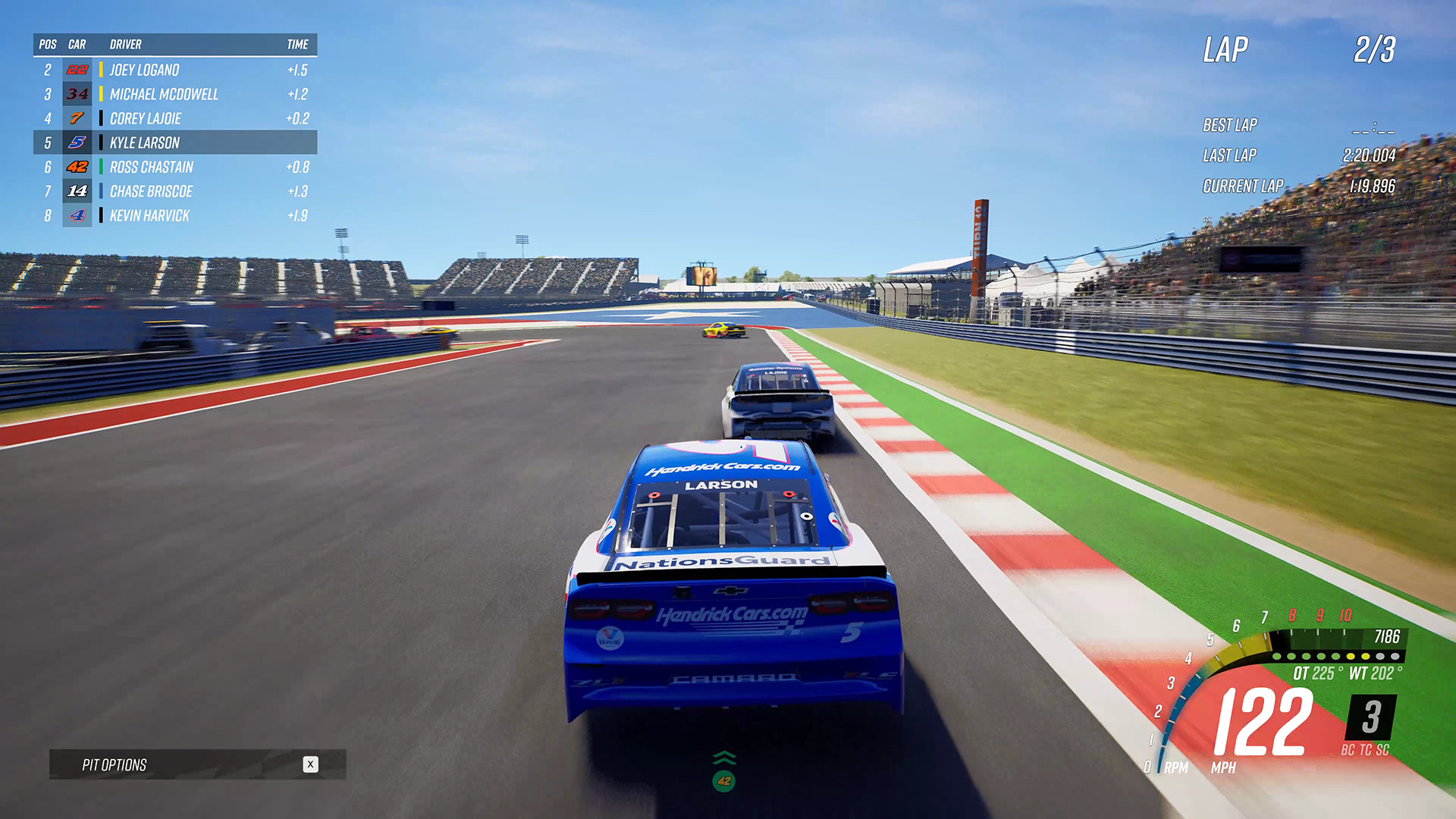 "Driving feels good and responsive. It’s not as steep of a learning curve as some newcomers might be bracing for, and can really fall into place quickly given the simplicity of the tracks in NASCAR. It’s not without its nuances though."

There are some more customizations outside of races you can tinker with too, and while their inclusion is functional and appreciated, it still feels like a rather slim set of choices compared to most modern racing games, especially considering you only have three manufacturers to choose from. There are way smaller and cheaper racing games from several years ago that give you more control of and freedom with your vehicle than this game does, and there’s just no getting around how underwhelming it can feel when you’ve only spent about 45 seconds tweaking your car only to discover you’ve reached the end of your options.

Customizing the color of various parts of your car is also similarly mediocre – including but not limited to a gloss slider that doesn’t even seem to change the gloss a noticeable amount in either direction. Only being able to change the amount of cloudiness in the sky for custom races is also bafflingly shallow. Menus are all nice and snappy with the most pertinent information being the most immediately visible, and I never felt overwhelmed or lost in NASCAR 21 Ignition’s UI. This is something that a lot of racing games seem to be screwing up lately, leading me to form a bit of a pet peeve about it, but here, the game benefits from its simplicity with concise, easily read menu screens that make navigating around the game nearly effortless.

In terms of visual quality, Ignition is acceptable most of the time. If you’re not looking at it too closely, I suspect you’ll rarely notice any real problems. Some texture pop-in and bland looking character models can hold it back a bit, and it can feel like you’re playing a game from several years ago at times, but overall, I didn’t see anything particularly egregious or impressive one way or the other. While I am disappointed with the lack of time-of-day options, the casual sunny or cloudy day weather does look good in the game and compliments the cars, signs, and fence posts just fine as they whiz past you. Shadows of fences and other barriers look realistically cast onto the track. Some blatantly reused assets seem a bit lazy, though. For instance, handing the data pad to the same Jeff Bezos clone before every race regardless of what team I’m on or where I’m at in my career just felt sillier and sillier the more it happened. 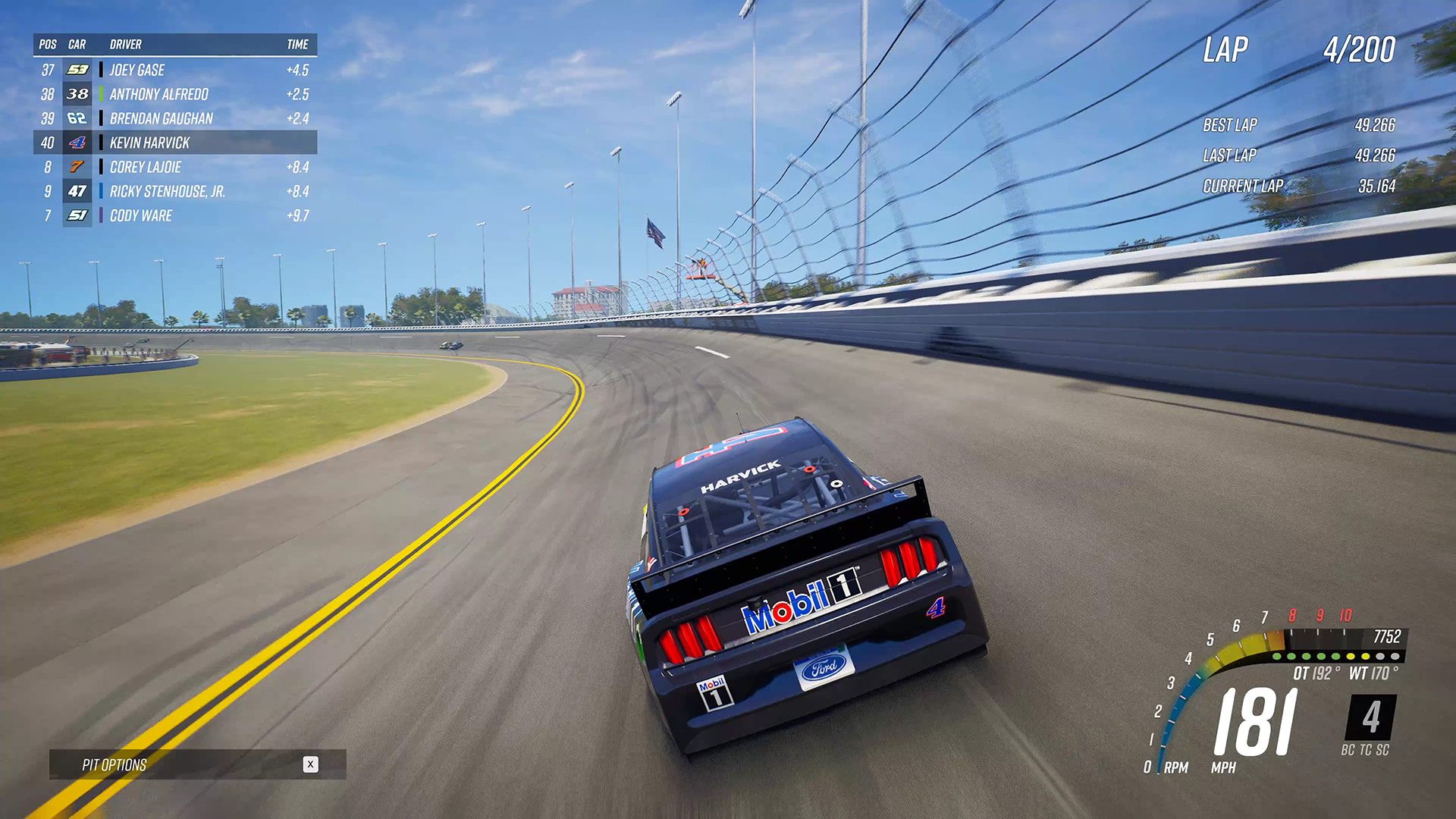 "In terms of visual quality, Ignition is acceptable most of the time. If you’re not looking at it too closely, I suspect you’ll rarely notice any real problems. Some texture pop-in and bland looking character models can hold it back a bit, and it can feel like you’re playing a game from several years ago at times, but overall, I didn’t see anything particularly egregious or impressive one way or the other."

Sound design is pretty solid here for the most part. From the roars of each car to the good ‘ol boy country music and classic rock accompanying the menus, you could fire up Ignition with your eyes closed and still have no doubt that you’re about to play a NASCAR game. Playing races in first person is also a great way to take in the sounds of the races, as cars coming up on your right or left is subtly telegraphed by the sound separation. A little more space between the handful of phrases that the crew chief insists on constantly spouting off would have been better for preserving the simulation, but overall, the sound is mostly nice here.

If you haven’t picked up on it yet, the basic theme of my experience with NASCAR 21 Ignition is that it seems to float around between good and mediocre – but mostly stays in good territory when it’s not having a graphical aneurysm. The only big common denominator that ever really bothered me is the bare-bones nature of it all. There’s not much customization options, race modifiers, or racing modes. Even for NASCAR, it just feels a bit too simple too often. Couple that with no current gen features or enhancements, and it ends up being a fairly hard sell for its full price of 60 bucks. The most hardcore NASCAR fans among us will probably still get some enjoyment out of it, and it’s saving grace – the racing itself – is undeniably adequate. For many, that might very well be enough. But in terms of just about everything else, it’s a bit of a snooze.

Final Verdict:
FAIR
NASCAR 21 Ignition provides a sufficient, no-frills NASCAR-themed racing game with little else going for it.
A copy of this game was provided by Developer/Publisher/Distributor/PR Agency for review purposes. Click here to know more about our Reviews Policy.