Another step forward for a historically struggling series.

As a series that’s been steadily improving throughout its run, Monster Games’ NASCAR Heat series is finally starting to hit its stride, but it still has a lot of ground to make up before it can thoroughly compete in the crowded racing genre. NASCAR Heat 3 took major strides in improving the foundation for the series, and the new entry makes more improvements to the formula by improving the career and tweaking the gameplay systems. Though it doesn’t offer the polish or diversified gameplay of many of its peers, NASCAR Heat 4 continues to build on the improvements of the previous games with its easy-to-learn, hard-to-master driving system and its progressively rewarding career mode, making it a strong racer for NASCAR fans.

You’re greeted with a slew of familiar modes as you enter NASCAR Heat 4. The career mode is touted as having the biggest upgrades over past years, and it mostly delivers on its feeling of progression. Like last year, it covers four stages of racing, starting from dirt racing and truck racing before reaching the two traditional car series.

Though it doesn’t have much in the way of a narrative, you’ll be greeted by your agent periodically, and he will guide you through your promotions and performances. Returning from previous games are rivalries and friendships with other drivers, though it’s more beneficial to befriend every person who sends you a message, and there are no situations that limit the potential to make friends. Even if I were called out for hitting another driver, which seemed to happen inconsistently compared to my actual hitting them, they will always still forgive you if you apologize. 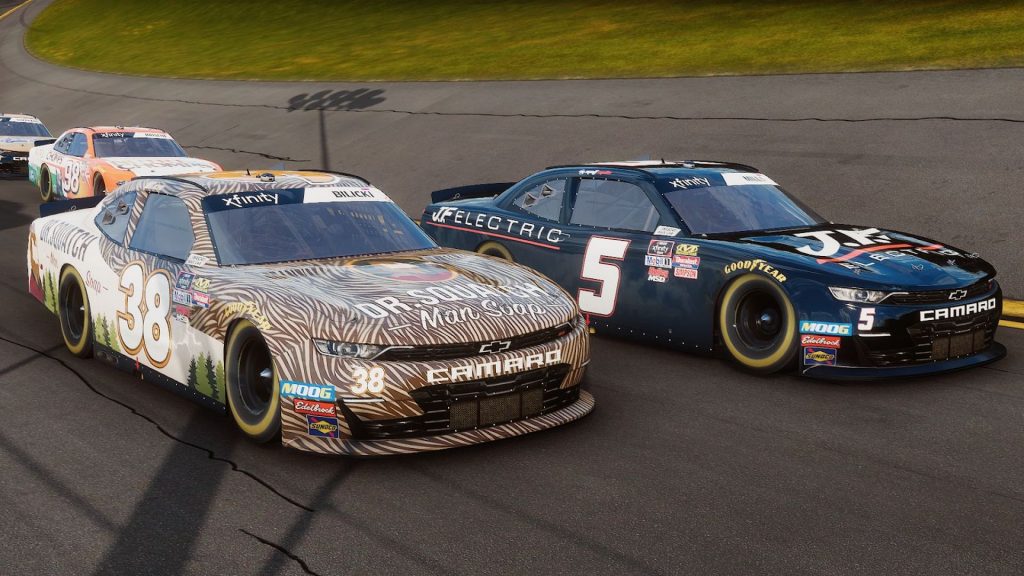 "The only three categories that can be improved are the car’s engine, aerodynamics, and suspension, and these all boil down to getting the highest number rating for each attribute through repairs and upgrades."

When you first start the dirt series, you’ll have severely underpowered cars, but just as you begin to think you’re not making progress, you’ll get a reinvigorating boost or surprise finish. Getting beaten by Tony Stewart is disheartening until you can finally pass him on the last lap and give yourself a win. This ability usually comes when you start your own team, giving you the chance to hire workers and upgrade your cars to become more powerful. Unfortunately, the car upgrades are frustratingly lackluster.

The only three categories that can be improved are the car’s engine, aerodynamics, and suspension, and these all boil down to getting the highest number rating for each attribute through repairs and upgrades. There’s no granularity here with engine types or specific additions, which makes figuring out the pattern that will get you the best results every time frustratingly easy. Though it’s rewarding to get to a point where you can consistently win or beat your goals, it didn’t feel as though I had to do much work to get there.

Challenges are also back this year, and they’re still some of the best ways for a quick and difficult way to jump in. Though they’re all variations of winning a race under tense circumstances, they’re varied enough to be entertaining, and they’re tough but fair in a way that will push you to keep playing one more round until you can finally beat it instead of quitting. It complements the serviceable season mode and online multiplayer that haven’t made particularly notable strides in their efforts but still do their jobs well. 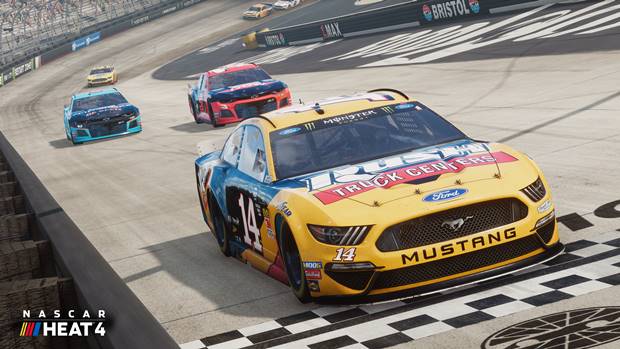 "Load times, however, can get unnervingly long, especially before racing on longer tracks."

The backbone here is the driving itself, and, fortunately, it has been improved and is a great example of gameplay that’s easy to pick up and play but has nuance if you want to truly master it. Every race has the same structure: practice to hone your time on the track, qualify to get your starting position, and race. You’ll usually be racing between 4 and 8 laps of the tracks, though you can increase the race length to as long as you want, up to the full length of real-life races. Races are usually quick, which begs you to play another, though having them as short as they are makes pitting almost entirely irrelevant.

As with previous entries in the series, NASCAR Heat 4 is still undecided on whether it wants to be an arcade racer or a racing sim. It has tighter controls than last year and doesn’t require much in the way of car maintenance for success, but it wants to make you drive realistically to win. The drafting has been significantly upgraded and is crucial to winning any race against tough opponents, and turning corners is precise, often to a frustrating level when the cars are liable to spin out at any moment. When you do it correctly, though, it’s evident and satisfying to watch yourself fly past the competition.

The physics are still unpredictable at times, especially in the dirt racing series. At high speeds, it’s often a coin flip as to whether you’ll be able to drift into a car and successfully accelerate into the next turn or tap it and spin out. Ramping off other cars is also unrealistically common, even if it is always entertaining to watch another car go flying. Furthermore, the damage isn’t particularly realistic in how it affects the cars. Unless there is a multi-car pile-up or repeated head-on damage to the cars, there’s very little that will actually affect how your car drives on the default damage settings. While in the dirt racing series it’s preferred to use other cars as leverage in sharp turns, I found myself doing the same thing in the Monster NASCAR series with few consequences. For a game that wants you to drive realistically to perform well, it’s a surprising misstep that could have made for a better sim and for more epic crashes.

The visuals have taken another step up this year, but they still pale in comparison to peers in the genre. While the cars themselves are pretty, the environments outside of them can get flat and repetitive quickly, especially in the dirt racing series, where you’ll be seeing the same tracks regularly. There is also no option to change the weather or track conditions, so you’ll always be driving under the same circumstances, which can get tiring on those repeated tracks. However, the sound design has been significantly improved, and there are many more live videos of racers who drop in to send messages, which is a nice touch and expansion from their involvement in previous entries. The game runs smoothly, too, and, while it wasn’t pushing the Xbox One hardware, it never dropped its framerate or crashed in my time with it. Load times, however, can get unnervingly long, especially before racing on longer tracks. 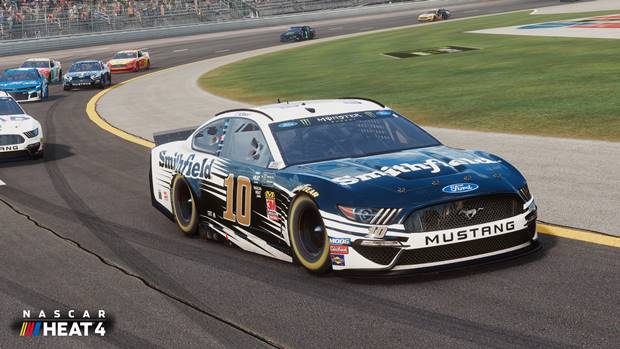 "As a racer, NASCAR Heat 4 does a lot of things right with its gameplay, and it has a solid career mode and consistently satisfying challenges to facilitate it."

As a racer, NASCAR Heat 4 does a lot of things right with its gameplay, and it has a solid career mode and consistently satisfying challenges to facilitate it. Driving is enjoyable in almost every circumstance because it’s as refined as the series has ever seen, and the progression is well-paced to make you feel like you’re learning. There are moments, though, where it shows its roughness around the edges that makes it less able to compete with its peers that are better looking and have more focused gameplay. It struggles with the kind of racing game that it wants to be, but it still manages to offer a fun racing experience for experienced and inexperienced NASCAR fans alike.

Final Verdict:
GOOD
NASCAR Heat 4 is an improved racer for NASCAR fans that is as refined as the series has ever been, but it struggles to decide its identity or compete technically with its peers.
A copy of this game was provided by Developer/Publisher/Distributor/PR Agency for review purposes. Click here to know more about our Reviews Policy.