If you remember the original Naughty Bear, you already know that the game was rather… lacklustre but its developer, Artificial Mind and Movement are attempting to bring the blood thirsty bear back with a bang as he causes all sorts of panic in a brand new, sunny setting.

Instead of spending all your time around one measly town, you’ll be exploring every inch of Paradise Island in Naughty Bear: Panic in Paradise; each of the bears has its own little area in which you’ll brutally defluffify him. Unfortunately, you won’t be doing this in free roam; you’ll have to complete each objective individually before heading back to the campaign screen to pick your next target. 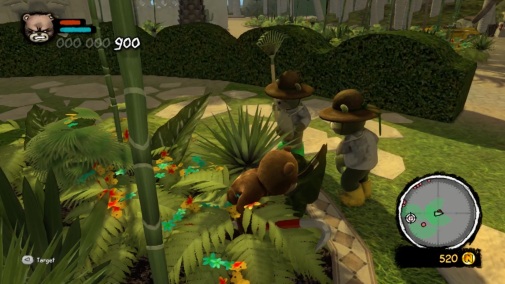 In total there are 36 weird and wonderful teddy bears which you’ll need to exterminate if you want to complete the game. If you’re more of a completionist however, Naughty Bear: Panic in Paradise offers a good chunk of replayability, giving the player the choice to earn scores on each level and depending on the score you receive, earning yourself either a bronze, silver or gold trophy. As well as quickly being able to see your score compared to your friends.

Paradise Island is a truly interesting place, containing everything your heart could ever desire (literally). You’ll visit run of the mill areas such as hotel lobbies to mind boggling, mad scientist lairs which are creating portals to another dimension. Be sure to check how you’re supposed to kill your target though, as if you don’t do it in the exact way described, you’ll end up pissing away hours, repeating the same mission until its eventually performed correctly.

I know, killing a bear in a certain way can’t be that difficult, right? Wrong. When you start any new mission, you’re giving a basic riddle as to what you need to do to properly *kill* the target, as just beating him to death with your fists just isn’t good enough, apparently. It can be anything from choking him to death with your bare, naked hands to drowning an evil teddy bear oil tycoon on his owl fuel. I know you’re trying to make it seem funny with the riddles but they just become frustrating; there’s nothing wrong with just saying what needs to be done. 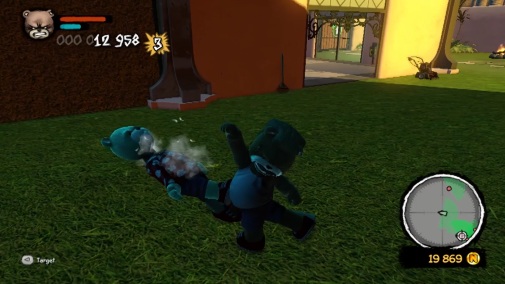 A really neat new feature in Naughty Bear: Panic in Paradise is the ability to spend the coins which you earn in game (where before, they only helped with earning a better level rating). The coins will let you buy all sorts of new goodies for Naughty Bear which will affect how effective he is in different situations, letting you tailor your armour and weapons to how you play. If you want to become a tank, buy lots of heavy armour but you won’t have the stamina to run far but you can also go the complete opposite direction and becomes a deadly assassin but you’ll probably die in just a few blows.

Unfortunately, the combat is still nothing to shout from the rooftops about; it’s still the same button bashing-fest that its predecessor was except now there’s the ability to perform heavy hits, bear-kicks and super-screams to mix it up a lil’ bit. Thankfully, it doesn’t feel as sloppy as its little brother and I think a lot of that is to do with the huge amount of weapons which you’re now able to play around with (and there are bloody hundreds of them!).

The problem is that the lack of combos does get boring after a while, even attempting to break it up and trying to get bears to kill themselves wears thin, especially when it makes no bloody sense how you’re supposed to do it. Then when you eventually discover how to unlock new items, you’ll spent 90% of your time repeating the same tactic of grabbing unsuspecting bears and dragging them into bushes to steal their disguise, which again, does absolutely bugger all; even killing them on random objects in the environment gets tedious (yet still entertaining). 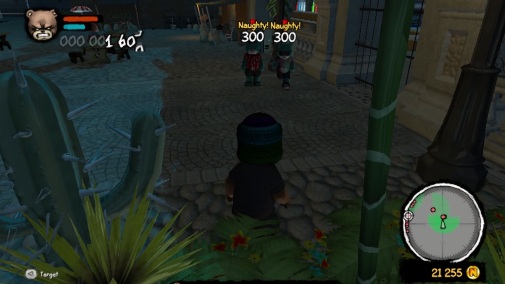 Pretty much every weapon you can imagine can be utilised in some sinister way in Naughty Bear: Panic in Paradise; everything from weird feathers to the alien ‘Sword of Peace’ can be yours to slaughter the inhabitants of Paradise Island. Each of which have a truly insane ‘kill move’ (execution), watching a bear head get beaten into the ground has never been so entertaining to watch.

Naughty Bear: Panic in Paradise is bloody fantastic; yeah, its predecessor was crappy but every series is welcome to a second attempt, especially when it turns out like this. Naughty Bear was meant to be an Xbox Live Arcade title from the start and the amount of content you’re receiving in this package is well worth the 1,200 Microsoft point price tag. It may still have a few annoying problems but this is a major step in the right direction.

Oh and thanks for keeping the original narrator; that chap never fails to make me laugh.

Final Verdict:
SUPERB
If you remember the original Naughty Bear, you already know that the game was rather… lacklustre but its developer, Artificial Mind and Movement are attempting to bring the blood thirsty bear back.
A copy of this game was provided by Developer/Publisher/Distributor/PR Agency for review purposes. Click here to know more about our Reviews Policy.