Meet naughty bear, a bear who unsurprisingly terrorises his fellow teddies and commits acts of varying naughtiness. In Naughty Bear you get to inhabit said teddy and commit a whole host of atrocities in order to rack up as high a score as possible. The setting generally revolves around a child-like land of teddies and toys and the tension between this and the vile acts that reward the highest scores produces the majority of the games quirky style and humour. If you’ve ever seen Happy Tree Friends or Wonder Showzen you’ll know the kind of dark comedy that is on offer. Whilst it takes a nod from various TV shows and internet shorts, the style of Naughty Bear is unique to the gaming scene, but sadly it is a case of style over substance.

The game revolves around naughty bear needing to take revenge on his peers for some reason and needing to commit horrible atrocities in order to do this. Even though there is nothing in the plot whatsoever the basic game mechanic can be quite fun in short bursts. It’s a high score ’em up where points are awarded for anti-social behaviours such as murder, sabotage and arson among many others. It can be a good laugh and satisfies the darker sides of the human psyche in a way only games like this can, and it can become quite addictive trying to keep beating your own high scores. After a while though the repetition starts to set in. There just aren’t enough different ways to gain naughty points, and were it not for some entertaining contextual take-downs, Naughty Bear would very quickly descend into a button mashing kill them all affair. As if it wasn’t bad enough, there’s only one level! That’s right, just one. You can try re-skinning it and changing the odd weapon placement, but I still noticed. The game attempts to extend replay value by giving you extra challenges such as complete the level without killing anyone, or not getting hit etc. Nice try, but a few extra challenges aren’t enough to make up for the sheer lack of content on display here. 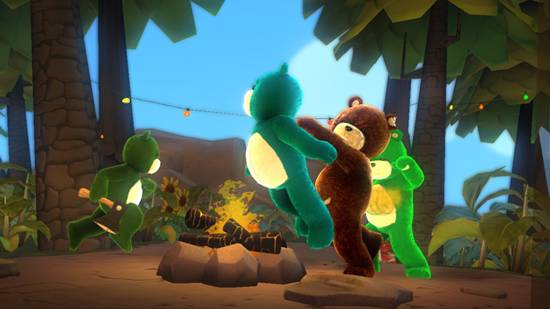 A few extra steps are taking to add to the variety and challenge, but these do little to help. Alternative costumes can be unlocked that alter Naughty’s stats, but they really don’t change the experience in any meaningful way. A few multiplayer modes with a fairly basic ranking system are offered, but I couldn’t even try these out because no one is online at all. For a fairly new game to have lost all its online community is probably testament to how lacklustre the multiplayer experience was. Did I mention the glitches yet? This is the best part of it all. I spent a lot of time on some of the levels trying to get that elusive gold trophy and it froze on me three times in a row on the same spot. This is most likely the least stable game I’ve played ever. It’s unacceptable. That said, I was recently offered an update through Xbox live and since then the problem seems to have died down significantly, but note that without this patch the game is completely unplayable. Naughty Bear is a fun enough engine with some solid controls, but the sheer lack of ideas, content and the annoying bugs and glitches prevent the formula from being a real winner.

In terms of style I can be a bit more positive about the whole thing. Well, mostly. The graphical style is enjoyable with a cartoon aesthetic that suits the game’s sense of humour very well. Technically speaking though it all seems like a bit of a disaster. The textures are bland, (the fact that there’s only one level doesn’t add much variety either) there are some odd transparencies kicking about and the fur just looks a little odd. Trust me you’ll notice this last one, as you generally see a lot of fur in a game about bears. On the plus side the animations are comparatively more pleasant. The visuals are nowhere near the standard we’ve come to expect from this gaming generation but the style makes up for the technical mediocrity. 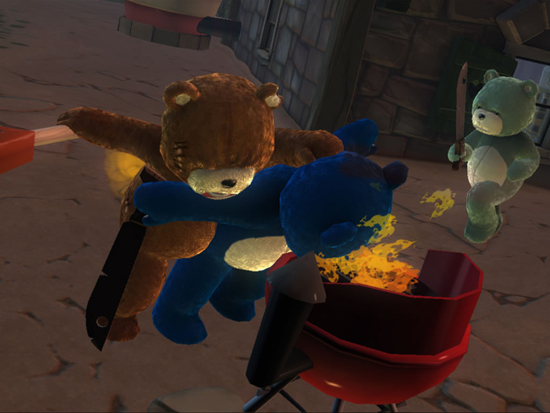 You do get used to them, but the visuals are just so… meh

The sound is on a similar plane as the visuals in Naughty Bear. The soundtrack is generally appropriate throughout, matching the game’s bizarre comedy, but there are one or two tracks and sound bites that sound amateurish and out of place. Likewise the vocal dubs are general gibberish the bears speak or the kid’s show style narrator, both of which are well voiced. The problem comes with Naughty’s boo which is heard so often that the irritating nature of it is made even more apparent. And don’t even get me started on the sound effects. They just feel weak, and might as well not be there. If you’re aiming to push a pair of speakers to their limits, Naughty Bear is not the game to do it with.

When discussing lifespan in games, people often separate the wheat from chaff by thinking whether or not the game is worth buying or just renting. The lasting appeal of Naughty Bear is put into perspective when I think to myself that even renting this game isn’t worth it for the amount of enjoyment you’ll have. For a single level repeated with mediocre challenges over it, and a broken multiplayer setup, a much lower price tag would be required to make this game worth while. If that’s not bad enough the achievements/trophies are all contextual and generally luck based. Picking boils off your arm would be more fun then going through the entire achievements list in Naughty Bear. 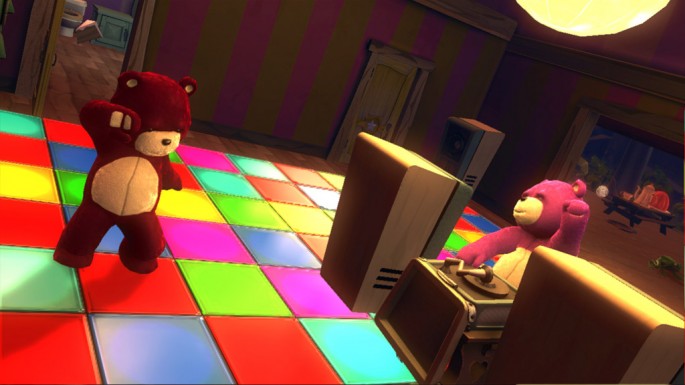 Naughty Bear feels like the first title from a rookie studio. The basic idea and engine is nice enough and is able to engage the score hunter within, but the corners that have been cut make it obvious that not much effort or thought was put into the game. The lack of levels, game modes and content in general prevent Naughty Bear from entertaining even the simplest of minds for more than about ten minutes. Naughty Bear is hardly even worth the cost of the disc it’s printed on. Do not be tempted to pick this one up. It is a road that can only lead to disappointment.

Style is unique and entertaining, High score based gameplay can be addictive ad rewarding

There is only one level, Very repetitive, Poor selection of weapons and traps, Glitchy and lacking in stability, Visuals are technically underwhelming

Final Verdict:
POOR
Naughty Bear attempts to merge dark humour in a pseudo-childlike world with open ended high score orientated gameplay, but falls flat due to an exceptional lack of ideas and content
A copy of this game was provided by Developer/Publisher/Distributor/PR Agency for review purposes. Click here to know more about our Reviews Policy.