2K has been riding high on the success of the NBA series for a number of years now, eclipsing the competition presented by Electronic Arts’ NBA Live series. Fortunately for basketball fans, NBA 2K17 raises the stakes higher with deep customization options and focusing on chaining breathtaking moves. If NBA 2K16 was a one step down for the long running franchise then the latest iteration ensures that Visual Concepts are back to the pedestal of delivering high octane basketball action.

MyCareer mode returns in 2K17 and it’s better than ever. For those who are unaware, the MyCareer mode is actually a story mode wherein you can scan your face using a companion app (although the results of the scan could range from downright funny to perfect). You take on the role of a high school player as you rise to the top while grabbing endorsement deals along the way. You are also given access to a cell phone where you can talk to different team members, coaches or hangout with friends. Initially, the story mode might feel a bit mundane but once you get the hang of the daily decision making, the experience becomes much more immersive. Unfortunately you cannot skip through the story cutscenes so this may annoy some players who want to avoid the plot-lines and jump directly into the action. Regardless of this minor issue, the MyCareer mode feels so much better than what was present in last year’s iteration and it’s a complete blast once you start investing your time into it.

"The on field gameplay feels smoother than ever before and it seems that the player is now in a better position to control the on-going action."

The on field gameplay feels smoother than ever before and it seems that the player is now in a better position to control the on-going action. Players can now easily chain moves and pull of breathtaking maneuvers helping you easily dodge the opposing team’s defenders. However the experience can be dragged down due to some uneven passing mechanics due to the AI of players who still don’t run on the right lane at times. However despite this minor annoyance, it seems that Visual Concepts have fixed some of the annoying bugs from the previous games. When you pass the ball to an AI standing close to the boundary, the said AI won’t tip over the boundary. This was something that had marred previous entries so this is a welcome change. Further improvements include the way the ‘green’ indicator or a successful shot works. In the past “green” does not always guarantee a successful shot, however this has been fixed in the latest installment.

MyGM mode has also been updated as for the first time ever the game allows you to select six new franchises that can be added to the Association. You can auto-design their logos and uniforms or design everything manually. The draft rules seem to be on the spot as each team can protect eight players. However you will only lose a set number of players which in turn is independent of how many teams are selecting. Online play seems solid and the servers are holding up reasonably well so far. We experienced minimal lag while playing the MyPark and MyTeam but overall the online experience is drastically better than last year’s iteration which was broken for several days after launch. 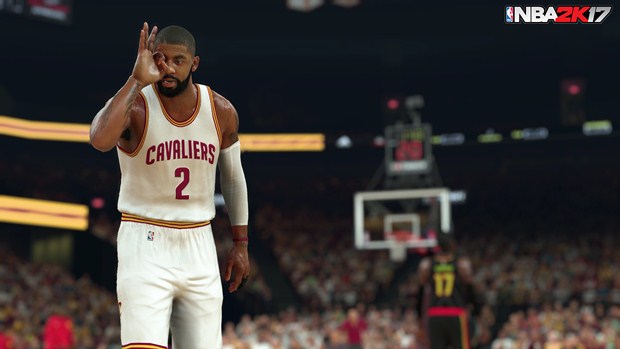 "Overall, NBA 2K17 follows the good old mantra…“if it ain’t broke, don’t fix it.” The game builds on an already existing and fantastic framework and if you are already a fan NBA 2K17 is game you need to play"

One of the things that the NBA series has always excelled in is its pristine presentation and NBA 2K17 continues the trend. Facial scan of players look amazing and the attention to detail could be quite stunning at times. On the field, the animations and individual player’s body flow look realistic and better than ever before. The TV crew includes the likes of Brent Barry, Kevin Harlan, Greg Anthony, Clark Kellogg, Shaquille O’Neal, Chris Webber, Steve Smith and David Aldridge. In short you won’t get a better crew than this in any sports game.

Visual Concepts went through 29 NBA arenas and recorded their iconic music scores and crowd sounds. I guess it’s safe to assume that NBA 2K17 feels more lively compared to its predecessors. Player specific dialogues with their real voices and faces scanned with great amount of detail further amps up the immersion factor. The user interface has been overhauled as well…there are new overlays and scoreboards, and intriguing half time entertainment sections that make you feel like you are actually watching the game in real-life. In short, Visual Concepts have really taken the game’s presentation to an all together different level with its excellent graphics and adrenaline soaked soundtrack.

Overall, NBA 2K17 follows the good old mantra…“if it ain’t broke, don’t fix it.” The game builds on an already existing and fantastic framework and if you are already a fan NBA 2K17 is game you need to play. It may not be accessible to new comers but that does not stop it from becoming one of the best basketball games of all time. Too many cutscenes in the MyCareer mode and the game’s inability to hold your hand at times may rarely deter your experience but its refreshingly deep gameplay mechanics and tons of different modes make it stand out as one of the best sports games you will play this year.

Improved on field gameplay mechanics, all gameplay modes such as MyCareer and MyGM have undergone impressive changes, Stunning presentation.

Some players are not accurate representation of their real life counterparts due to inaccurate facial scanning, Unskippable cutscenes during myCareer mode.

Final Verdict:
AMAZING
A copy of this game was provided by Developer/Publisher/Distributor/PR Agency for review purposes. Click here to know more about our Reviews Policy.