Coming off from reviewing last year’s excellent NBA 2K17, I found myself quite conflicted with NBA 2K18. Visual Concepts have been delivering exceptional basketball games in recent years and experiencing them has been nothing short of extraordinary. In fact, their dominance became so prevalent that they literally knocked out EA’s NBA Live series out of relevance. With NBA 2K18, Visual Concepts have made a number of changes which don’t quite gel with the overall product as the game fails to reach the great heights achieved by its fantastic predecessor.

This isn’t to say that NBA 2K18 is a bad game, actually far from it. But it includes a number of questionable practices regarding microtransactions. Look, generally speaking I am fine with microtransactions as long as they add value to the game and aren’t overdone. But in case of NBA 2K18, they are so far stretched that it totally throws the balance out of the playing court. They are mostly found in the game’s MyCareer mode which involves the player character beginning at a base rating of 60. One of the goals of the MyCareer mode is to be the absolutely best player out there and the path to reach that pedestal is by increasing your skills across various categories. For starters, once you start playing with your favorite team you will be rewarded with virtual currency. These are enough to unlock some of the earlier skills, however once you look at unlocking some of the later skills, these require literally thousands of points. 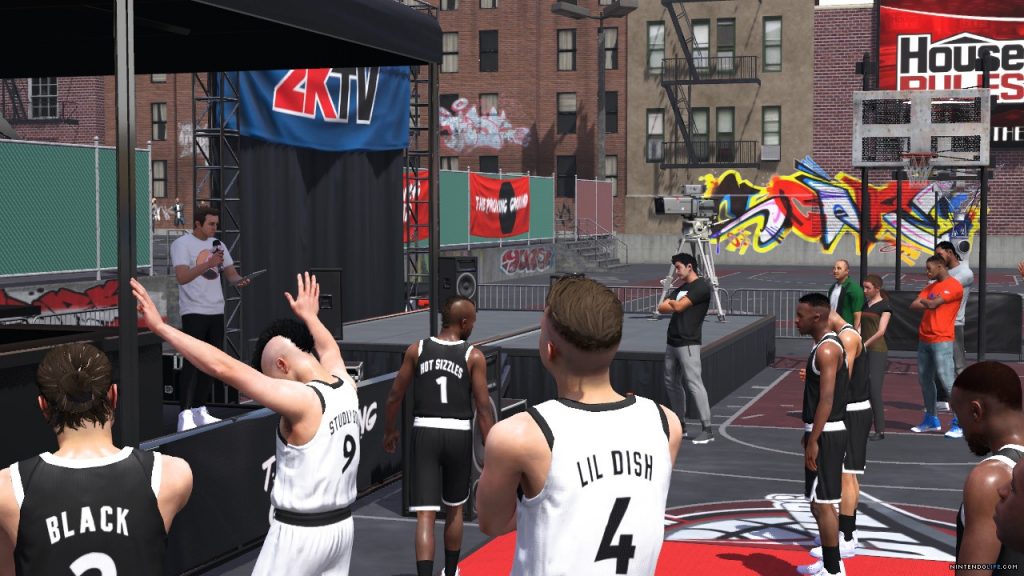 "Look, generally speaking I am fine with microtransactions as long as they add value to the game and aren’t overdone. But in case of NBA 2K18, they are so far stretched that it totally throws the balance out of the playing court."

So, you are either looking at grinding through tons of matches or use microtransactions to get the number of points and increase your rating. This emphasis on microtransactions also extends to customization. If you want a particular hair style, prepare to shelve out that virtual currency. You want a shiny tattoo. Sure, kindly pay for that too. This then applies to player’s shoes, clothes and even animations. Yes, you need to have a ton of virtual currency either by grinding or by paying real money. Virtual Currency packs range from 5000 coins to 450,000 coins and this will set you back from $2 to $100. Now, Virtual Currency is not a new concept to the series. It has been here since NBA 2K13 but it’s absolutely ridiculous to see this become a kind of a forced feature in NBA 2K18, specially with all the new modes that the game includes. According to user reports, it will take over two hundred matches to achieve a player rating of mid 80s. You might want to adjust your expectations if you are aiming for that golden 99 rating should you wish to not spend your hard-earned money on microtransactions.

However, if you can look past these unwanted practices, NBA 2K18 provides a genuinely entertaining basketball experience and one of the ways it does this is through its vastly improved presentation and body animations. Top notch presentation isn’t exactly alien to this franchise (and I have praised it a lot in my NBA 2K17 review), but Visual Concepts have taken it to an altogether different level. Kobe Bryant and Kevin Garnett make an appearance as guest commentators while the on-field commentary team is simply exceptional and dynamic, making it perhaps the best iteration the series has seen.

You can really see that Visual Concepts are pushing the immersion factor when they include minor details such as on-site interviews and players speaking about their personal experience with playing ball. These are intricate details but they go a long way in amping up the immersion factor. However, I found the general music to be lacking this time around. Unlike, NBA 2K17, which had a certain flow to its music, I found NBA 2K18’s music to be forced in without context. It almost feels like the developers thought this particular track sounds catchy so let’s just put it in there without any context. 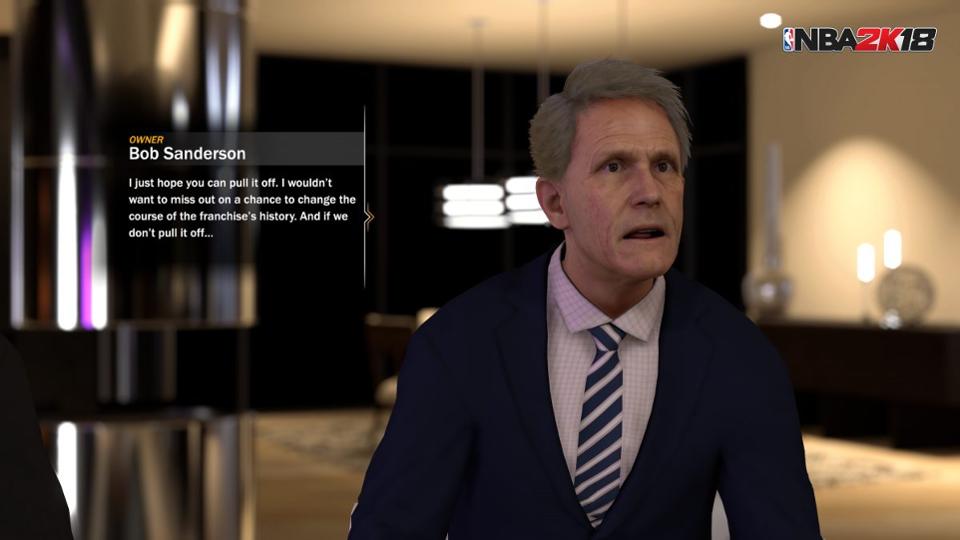 "Passing and dribbling feel solid whereas taking shots feel much more dynamic. Ball physics have been largely improved upon and they no longer feel like they are attached to the player hands and instead behave accordingly with the surrounding environment."

The graphics for the most part are pretty amazing and you have to look twice before realizing that the characters are just 3D models. This is backed up by some pretty amazing cloth and hair simulation, however facial animations are largely disappointing…and boy aren’t’ those doll eyes a straight rip off from your favorite horror movie. The game also suffers from clipping issues but they are not something that will detract you from the overall experience.

Gameplay wise, most of the stuff that you have seen in NBA 2K17 has made its transition quite well in NBA 2K18. Gameplay feels really smooth thanks to a solid 60 frames per second experience and fluid animations. Passing and dribbling feel solid whereas taking shots feel much more dynamic. Ball physics have been largely improved upon and they no longer feel like they are attached to the player hands and instead behave accordingly with the surrounding environment. Defense is a bit harder this time around but that is alright because it was way easier in the previous entry. So, from a purely gameplay perspective and on field game action, the series’ latest entry delivers once again.

MyGM, and MyLeague make a return in NBA 2K18 and they are largely the same except the former which allows you to take your custom character and put him in the shoes of a manager. From a top level, it feels like an extension to the MyCareer mode because MyGM takes place after your character’s career ends due to an injury. Unfortunately, MyGM falters in its presentation, the lack of voice overs and some weird dialogue choices. You will still be developing your dream team by finishing challenges but it’s largely the same experience as before except for the unwanted text based story mode that I mentioned earlier. 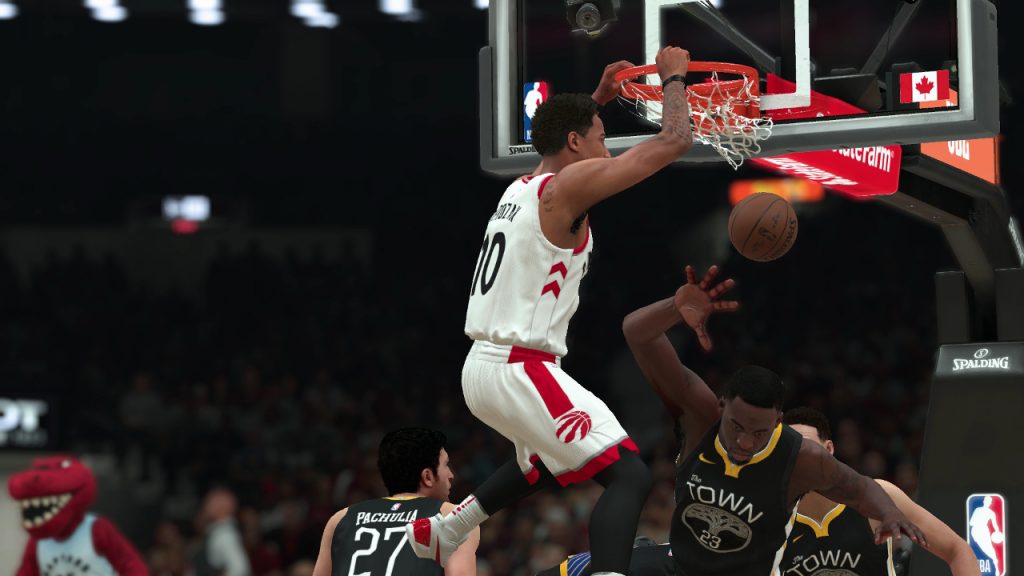 "The game’s microtransactions are disastrous and makes the career mode and absolute grind. Ultimately, the core of NBA 2K18’s gameplay is still intact and if you don’t mind the microtransactions in the MyCareer mode, you are going to have a blast."

NBA 2K18 also introduces Neighborhoods, a kind of a social space where you and other players hang out in a semi-open world setting. The world is filled with shops where you can buy new hair styles, tattoo, clothes…in short, this mode ties in with MyCareer, MyPark, and ProAm game modes. Unfortunately, these locations are placed at long distances from each other and it was pretty painful to walk all over again. I get what Visual Concepts are trying to do with Neighborhoods (although the idea seems to be derived from online games such as Destiny’s Tower) and I am really intrigued to see where they can take this concept in the next iteration.

In the end NBA 2K18 feels like Visual Concepts is trying too many things at once. MyGM’s story mode and Neighborhoods had great potential but what we got instead is an unpolished experience. The game’s microtransactions are disastrous and makes the career mode and absolute grind. Ultimately, the core of NBA 2K18’s gameplay is still intact and if you don’t mind the microtransactions in the MyCareer mode, you are going to have a blast.

Exceptional on field gameplay, many improvements in the gameplay front, a ton of modes, superb presentation and commentary.

Final Verdict:
GOOD
NBA 2K18's microtransactions are disappointing but if you can ignore that, you have a basketball game that is a ton of fun to play.
A copy of this game was provided by Developer/Publisher/Distributor/PR Agency for review purposes. Click here to know more about our Reviews Policy.