You can now purchase NBA JAM: On Fire Edition now on the Xbox Live Marketplace and the Playstation Network.  It will run you 1200 Microsoft Points or $14.99 on the Playstation 3.  The has brought back all the cool features and modes from the original NBA Jam plus the addition of other stuff as well.  This includes new modes and a new roster with new characters including SSX cast, which can be seen in the video above as well as mascots, Isaac Clarke from Dead Space (below), and more!  NBA JAM never ceases to entertain.  You can check the launch trailer here and here a link to the Official Site.  Full Press release including info on some new features below. 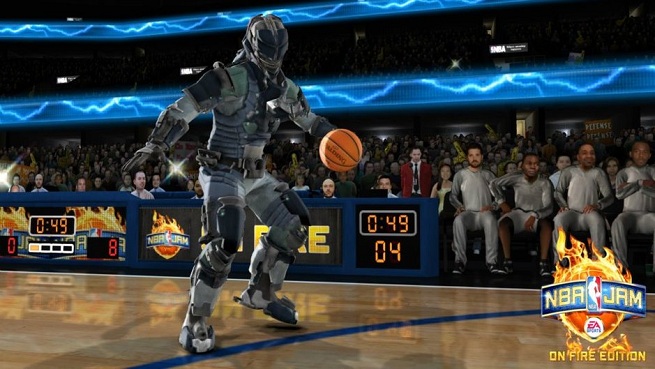 NBA JAM: On Fire Edition is rated “E” for Everyone by the ESRB and 3+ by PEGI. For more information visit www.facebook.com/NBAJAM, www.easports.com/nbajam, or follow www.twitter.com/NBAJAM. Screenshots and videos are available at http://info.ea.com.