Posted By Will Borger | On 25th, Dec. 2013 Under Article, Reviews | Follow This Author @will_borger

For many, the sports video game begins and ends with titles made by EA. It’s easy to see why. The company has a stranglehold on the NFL license, produces the well-received NCAA games, and makes FIFA, which has risen to be the industry’s premier football/soccer game, if not its premier sports title. So no matter where you live, it’s safe to say that EA has football covered.

Basketball, however, is a different story, despite the fact that the publisher once safely controlled the genre, and EA’s troubles in crafting a basketball sim in recent years are nothing if not well-documented. The trouble began with NBA Elite 11, a game that was so poorly received prior release that EA decided to scrap the title altogether, and focus on providing a better product for next year. A year passed, and once again, EA did not release a basketball game.

It looked like EA would finally get things back on track in 2012 with NBA Live 2013, but the game was canceled once again, due to a disappointing development cycle. While EA spent their time developing games that never saw release, 2K built the NBA 2K series into a juggernaut, garnering huge sales and a large amount of critical acclaim. 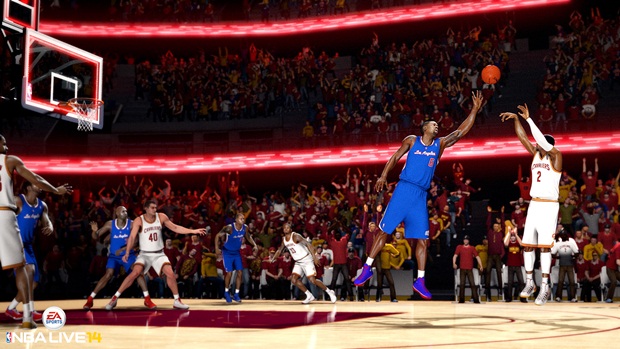 "Character models are ugly, grotesque things. At best, players do not look proportionally accurate and bear little more than a passing resemblance to their real life counterparts, and forced to play basketball at gunpoint."

As time went by, the desire for a new NBA Live title diminished, and some began to wonder if EA wouldn’t be better off putting its considerable resources into another title, instead of wasting time, money, and manpower trying to challenge 2K in a market they all but monopolized. But EA stuck with it. The result is NBA Live 14, the first console basketball title from the publisher since 2009, and the only game from EA this year that will be releasing solely on the PlayStation 4 and Xbox One. You would think that the reduced number of platforms and sheer amount of development time would allow EA to produce a game worthy of representing the NBA Live franchise. Unfortunately, this isn’t the case, and while NBA Live 14 isn’t a terrible game, it’s not a good one, either.

The game’s problems rear their ugly heads almost immediately, and boy, are they ugly. The first, and most apparent issue is the way the game looks. Character models are ugly, grotesque things. At best, players do not look proportionally accurate and bear little more than a passing resemblance to their real life counterparts, and forced to play basketball at gunpoint. The animations are equally stiff, and often wrong. Arms twist at odd angles and balls leave the hands of player before they finish their animations. The crowds and coaches look even worse. It’s almost as if they were lifted out of the PS2-era. In addition, all of these characters are unnaturally shiny and smooth, as if they were permanently covered in a thin layer of oil.

These problems aren’t incredibly apparent normally, as the characters are moving quickly and you’re often too far away from them to notice specific issues, but you’ll often be shocked by how ugly the game is every time the camera zooms in for a highlight reel or someone steps up to the line to take a free throw. This sort of thing wouldn’t have been acceptable on the PS3 or the Xbox 360, and it certainly isn’t acceptable now, especially when your competition is producing character models that are crossing into uncanny valley territory. 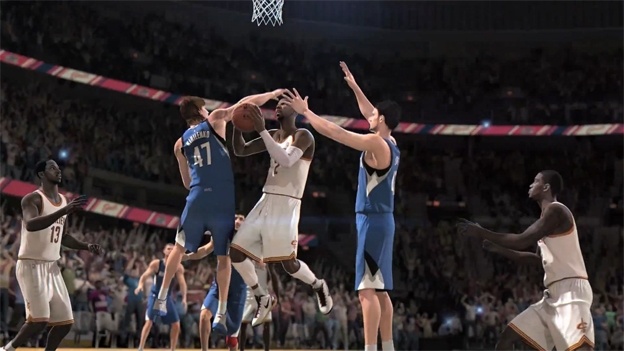 "Defenders stick to the offensive players like glue until you’ve figured out how the bounceTek system works, and even then, trying to set up any sort of realistic play is almost always more trouble than it’s worth."

Sound design is a little better, and the commentary, provided by Mike Breen and Jeff Van Gundy is nice. Unfortunately, they often revert to generic pronouns such as “he” and “this team,” instead of specific stories or discussions about specific players. As you can imagine, that gets old quickly.

Unfortunately, the game suffers in the gameplay department, as well. NBA Live introduces bounceTek, a physics-based dribbling system that you’ll control with the right stick. Unfortunately, the game doesn’t feel like it needs to explain how this, or anything else, for that matter, works. The game offers a short video telling you what it is and informing you that it has three levels of complexity, but it never demonstrates how the system works or how the levels interact with one another. The system does work rather nicely once you do your research and get some practice in, but the fact that you have to go outside of the game for information on one of its core systems is more than a little absurd.

Unfortunately, bounceTek is the best part of NBA Live’s gameplay. Defenders stick to the offensive players like glue until you’ve figured out how the bounceTek system works, and even then, trying to set up any sort of realistic play is almost always more trouble than it’s worth. This is especially true if you want to do any type of shooting, which means that most games evolve into “take a player to the paint, spin around defender, shoot layups and or pass for a dunk, rinse and repeat 40-50 times.” It can be still fun, in a rather silly sort of way, but those expecting a realistic basketball sim will be disappointed. 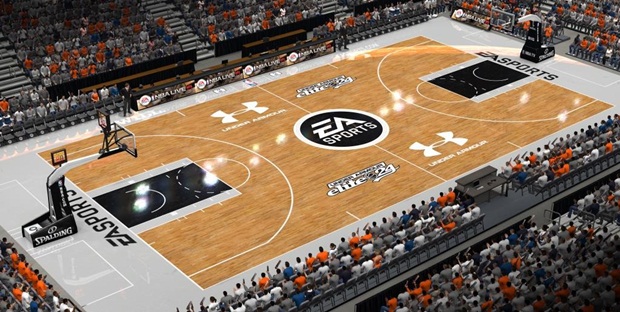 "Ultimately, every problem that NBA Live has is compounded by the fact that we had to wait for it. As strange as it sounds, the game feels incredibly rushed, which doesn’t bode well considering how long EA has been trying to get it right."

The game’s mechanical shortcomings are a shame, because there are some genuinely good ideas here. NBA Live has all of the standard modes you’d expect, but a couple really stand out. Big Moments mode challenges you with recreating real life moments or big shots, and might have you do anything from replaying an entire game to recreating a last-second three point shot to win the game. The cool part about this is that these moments are taken from the current NBA season, so you’ll be able to try your hand at them just days after they go down. NBA Live also borrows from FIFA, introducing Ultimate Team mode, which allows you to unlock (or buy) trading cards. Each card unlocks a player for use, allowing you to mix and match, and create the titular Ultimate Team, which you can take online. Unfortunately, the online mode is rather laggy. This doesn’t do the poor mechanics any favors, so there’s no real reason to invest your time into the game’s online mode unless you are truly dedicated.

There’s also Rising Star mode, which allows you to create a player, play the Draft Showcase game, get drafted and compete in the league. The game scores you on everything you do, good and bad, from turnovers to passes, but the system has some slight problems. You’ll lose points for every missed shot, even if it was a good one that just happened to miss, but the game won’t reward you for picking up fouls or making free throws.

You’re scored on offense, defense, and teamwork, and despite the few problems listed above, it works rather well, at least until you realize your low teamwork score is dragging down your average, which is frustrating because the friendly AI will only make shots if you set them up perfectly. Still, the mode is enjoyable enough, and having a player that improves based on how well you play is a nice draw. There’s also Dynasty mode, which allows you to manage a team, but as far as menu-based managerial games go, it’s a significant drop from what, say Football Manager allows you to do, and I can’t imagine that this rendition will be all that popular.

Ultimately, every problem that NBA Live has is compounded by the fact that we had to wait for it. As strange as it sounds, the game feels incredibly rushed, which doesn’t bode well considering how long EA has been trying to get it right. Still, getting back in the basketball game was a large part of the battle, and now the company has a foundation to build upon. If they can fix what doesn’t work and improve the things that do, they might have a chance of competing against 2K in the future. Right now, however, 2K has little to worry about. Reign, indeed.

Big Moments mode is a nice new take on an old concept. Rising Star and Ultimate Team mode add something new to the game, and give you a reason to come back. Sound design is pretty good overall.

The core mechanics need a lot of work. No tutorials for the bounceTek system. Ugly visuals. Announcers get repetitive. The online is laggy.

NBA Live 2014 marks EA’s return to the basketball sim, but there’s little reason to play it when NBA 2K14 exists.

A copy of this game was provided by developer/publisher for review purposes. Click here to know more about our Reviews Policy.
Tagged With: EA, EA Sports, ea tiburon, NBA Live 14, Xbox One