A complete guide for NBA Live 19.

With NBA Live 19, EA is definitely stepping up their game and moving things in the right direction. There are a lot of improvements that this game brings and in some ways, it’s even better than its main competition. If there’s anything at all you would like to know about this game, then this guide is here to help you out. 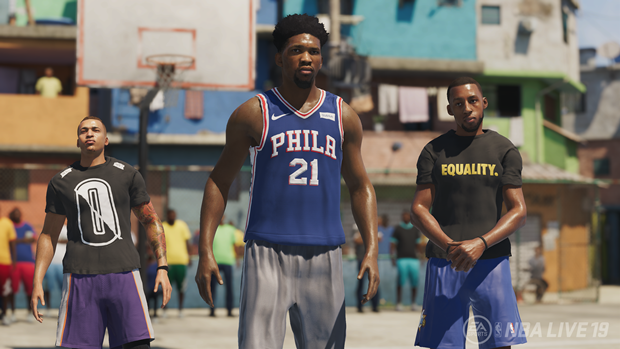 You can find below the top rated players in the  game, each categorized according to their positions.

With Court Battles, players will have a chance to go up against players in the online community. In these battles, you will have to play these matches in custom courts with custom rules as you attempt to take over these courts to get some great rewards. Similarly, you will have to defend your own court as well.

In Court Battles, attack and defend phases are split into Campaigns and you will have a limited time to try and take over as many courts as possible,  while also trying to defend your own. You will be able to reach a higher reward tier with a Campaign if you manage to capture a greater number of courts. Apart from the rewards, your Court Hype will also increased based on how you perform in this mode. Court Hype is basically a ranking  for this mode, and you will start off as a Rookie and can work your way up to ICON.

The first thing you will have to focus on is setting up your defenses on your custom court. Other players will be playing your AI squad, so you will have to be strategic about this. You will have to choose your court’s Game Rules from 38 different rulesets that are currently available. You will start with  only a few rulesets to choose from but you will gain access to more rulesets as your Court Hype increases. Following this, you will have to select your Defensive lineup and you will already start off with a few players. You will also be able to use players recruited from Streets World Tour in Court Battles. You will also gain new players as your Court Hype goes up. Additionally, you will get new players by achieving controlled court tiers in the Campaign of a Court Battle. Finally, you will also be able to get new players from various Live Events that are held in the game. You should pick your Defensive Lineup based on the particular Game Rules you have chosen for your court.

You will now have to choose an Attacker’s handicap. You will be able to unlock more Attacker Handicaps as your Court Hype level increases. You will have to use a Handicap that will be balanced as per your Defensive Lineup and Game Rules so that you gain an advantage. Make sure you experiment with different combinations before you settle on one.

The next course of action is setting your Game Plan which will determine the unique behavior of your AI team. There are lots of combinations to try out, so make sure you try different ones to find what suits you best. Before you begin, a match, you will also be able to see an opponent’s combinations so that know what exactly you’re going up against. If anyone has attempted to take over your court,  challenge them and enter a battle to take your court back. When you’re going to attack a court, you will be able to choose your Attacking Lineup and also the difficulty. Playing on harder settings grants more Reward Points and Court Hype. In fact, playing on Easy won’t allow you to take over the court.

You will gain greater Reward Points and Court Hype if the opponent’s combinations are of a higher tier than yours. If you take over an opponent’s court, they have three chances to try and reclaim the court. Your reward tier will go up based on the number of courts you have under your control during the Campaign. At the end of the campaign, all of the court go back to their owners, and players will receive  rewards based on their Reward Tiers. Before you go in to take control of an opponent’s court, take note of their state which will indicate whether they can be attacked immediately, or whether their court is under the control of yet another player, or something  else. If the player is available to be challenged, then you can immediately begin a Court Battle and try to take control of that player’s  court.

HOW TO GAIN XP AND TRAITS QUICKLY

If you’re wondering how to gain XP and traits quickly in this game, we’ve got you covered. You will need XP and traits to rank up in the game. The video below will show you exactly how you can get  XP and  traits really fast in this game.

In Ultimate Team, you will have your own team that you can keep upgrading with more items and with better players as you win more matches. You will be able to customize your team’s jerseys, logo, and also determine what playbook they use for games. You can also view your Active Lineup and make any changes necessary.

Packs in the game will contains players and items and they are of utmost importance. You can get new Packs either with NBA points bought with real money, or with Coins that you can earn just by playing the game. You can use items you get from Packs in your lineup, but if you can’t make use of them, you can choose to sell these items in the community market. This year, you will be able to see pack probability in the store  which will let you see what the chances are to get different items with a given pack.

Just go into the store and click ‘View Details’ for a pack to see what the probability is to get a particular category of items. Ranges of players are grouped by OVR bands and the higher the OVR band, the lower the probability getting it from a pack. You should keep in mind that the probabilities listed are for an individual pack, and these are not cumulative in any sense. If you need any particular item and don’t want to get it through a pack, you can look for it in the community market.

You can earn extra Coins and Packs by playing games in Fantasy Challenges. Some will only be available for a limited time, and these include Weekly Challenges as well.

You will become a starter in your team when your overall rating is higher than that of the top player of your position. As for how many minutes you get to play on the court, this is determined by your role and your Performance Grade,  so make sure you get as high a grade as possible. To practice, play against Computer-controlled teams and keep up with your career’s progress by checking out Player Goals and Career Milestone Progress.

HOW TO QUICKLY AND EASILY MAKE COINS

Note: Please use the following cheats at your own discretion. Using cheats online or offline may lead to an immediate ban. GamingBolt or its staff members are not responsible for any problems arising due to their use.

If you don’t want to spend real money on the game and get NBA points, then you will need Coins which can be earned just by playing the game. If you want to know the easiest method to make coins in the game, check out the video below.

Local Legend: Complete all Games and all objectives at any Venue in World Tour

We Run The Court: Win a Live Run Pick-Up Game

Stacking crates to the ceiling: Complete a Crate Collection

Call the Doctor: Perform an ankle breaker in a game

Kidding Around: Perform every type of pass in the game.

World Domination: Complete all the Key Games at EVERY Venue in World Tour

Executive of the Year: Complete GM List 2 in Ultimate Team.

Best team in the league: Win the NBA Finals in Franchise

Climbing the Ranks: Win an Online Head to Head Game

Defense Matters: Cause 3 bumps to pickup over the course of a game

Triple, Double, Hold the Points: Obtain a Triple Double with any combination of rebounds, assists, steals, and blocks

The Hero: Unlock All Trophies for NBA LIVE 19

Shooter’s Touch: Successfully perform every shot type within a game

Joining The Elite: Win the MVP Award in The League within The One

Streetballer: Complete all the Key Games at your first Venue in World Tour

Take ’em Down: Complete an entire series of games in any LIVE Event.

No Buckets Allowed: Hold an opposing team scoreless for 4 minutes

Beginning to Understand: Complete any Objective within The One

The Journey Begins: Create a player

Getting the Ring: Win the NBA Finals in The League within The One