A look back at a rather underrated NFS entry.

Need for Speed is a series that has skidded and swerved in all sorts of different directions over the many years of its existence. Not all of its ideas have panned out properly but many of them have. One of the biggest successful directions the series has ever taken is integrating street gang stories and adding context to races with some light storytelling to help justify the action. With Need for Speed Underground and Most Wanted Largely being regarded as successful entries into the franchise it would make sense that those ideas were refined and repeated in Need for Speed Carbon. A racing game that was launched on about as many systems as one can expect any single game to launch on with all the main sixth and seventh generation consoles included as well as competent ports to the PC and PSP. Despite its prevalence, it’s a Need for Speed game that isn’t talked about often these days, as Hot Pursuit and Most Wanted still tower over Carbon for a multitude of reasons, but it was a great Need for Speed game in its own right.

Firstly, anybody who fires up Carbon will immediately notice its presentation that stood out at the time and even today looks pretty interesting with FMV sequences over top of in-game assets giving cutscenes an interesting look that, while it wasn’t to the taste of everybody at that time, has aged surprisingly well if you’re looking at it from an artistic point of view anyway. The game is a continuation from Most Wanted so you will see characters from that game from time to time, and that gives Need for Speed Carbon a sense of continuity that most Need for Speed games don’t really have as they’ve generally been unrelated to one another.

Also in line with Most Wanted, the previously mentioned FMV sequences do make a stylish return, although here arguably look a little bit better. Still, again, this is something that not everybody enjoyed at the time, but today, after so many other games have come out it does help Carbon stand out from the pack. Objects of importance will have more vibrant colors to them then the background or even the people handling them, and the people themselves have that smooth airbrushed look that might remind one of a comic book.

While the story itself and the things that the characters say and do are all highly predictable and there’s basically nothing in it that you don’t see coming from a mile away, the story is a serviceable Need for Speed style story with a little bit of double-crossing, a little bit of crime, and a handful of characters with different levels of ego and motivation to pay attention to. Again, it’s nothing that you haven’t seen before or since, even within the NFS catalogue, and some of the previous games have arguably done it better from a narrative standpoint, but given the perfection of the art style from Most Wanted it does come across as fairly entertaining most of the time, and that’s coming from a guy like me who doesn’t even really want stories and games like this to begin with.

As far as Carbon’s presentation outside of the cutscenes there’s a lot to be pleased with here as well. The graphics are fairly good for their time and considering that there were so many versions of the game being made at once. The neon lights on top of the night skies is a time-tested aesthetic and it worked here and it continues to work with modern entries like Need for Speed Heat. Carbon was perhaps the best example of it when it came out though. neon signs on the sides of buildings and car lights bounced off of the darker background in a nice satisfying way that set the visual tone for what the game was going for but also didn’t distract you from the racing too much. A good balance that can be hard to strike with racing games of this type and from this era. 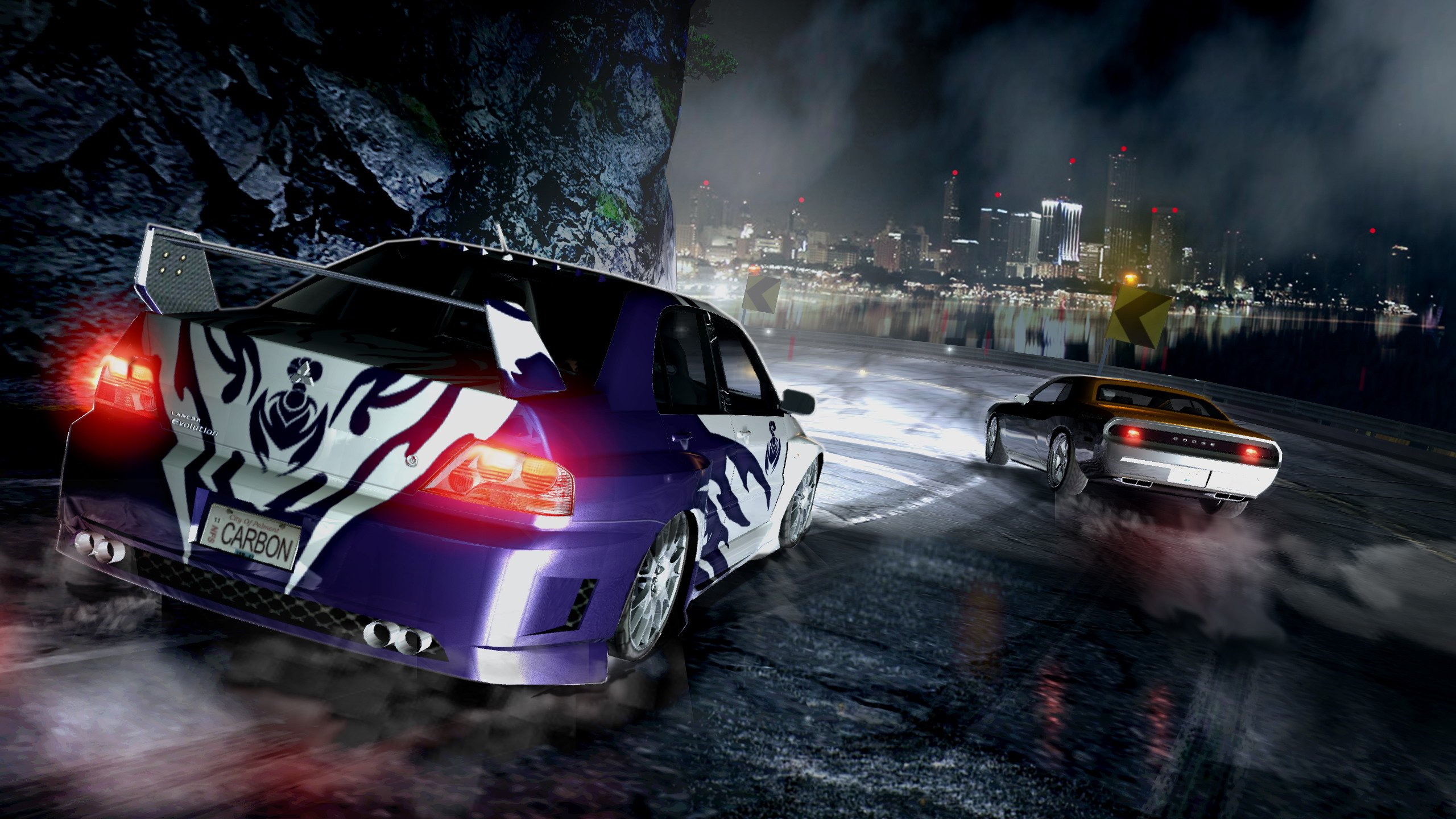 Gameplay is also another area where Carbon took what the previous games had laid down and further refined them with drift events, sprints, straight races, and most other types of events returning in this game despite being renamed or changed around in a few subtle ways. The open-world does a good job of spreading these events out too, giving you time to enjoy the driving from event to event while not feeling too barren. The general size of the open-world was perhaps held back a bit by the fact that previous gen versions of the game were also being made and it had to run on those older systems, but what they did with the size of the world is what really matters and they did a good job with making it feel dense but not too much so.

Traveling around to the city’s four different boroughs and the multiple areas within them, including turfs that you take control of by winning their events, was and still is a fun addicting gameplay loop that continues to this day in various forms because of how well it works, and Carbon hit the nail on the head with it here. In fact, doing events against rival crews to take over territories was unique to Carbon as all Need for Speed games before we’re broken up into individual events that weren’t nearly as free-flowing as the way Carbon was set up. Also, tuning up your ride is pretty detailed with lots of options for your suspension, tires, brakes, and nitrous that can help you nudge any one of your cars towards your preferred play style.

Previous Need for Speed games tinkered with this a bit, but it was Carbon that arguably did it the best with so many options and configurations that you could come up with for each of its many cars. It also helps a lot that the rubber banding of previous NFS games was severely reduced here, and that’s a great thing as your wins feel more like wins and your losses provide you with more motivation to get better instead of just trying to boost past opponents at the end of every race. 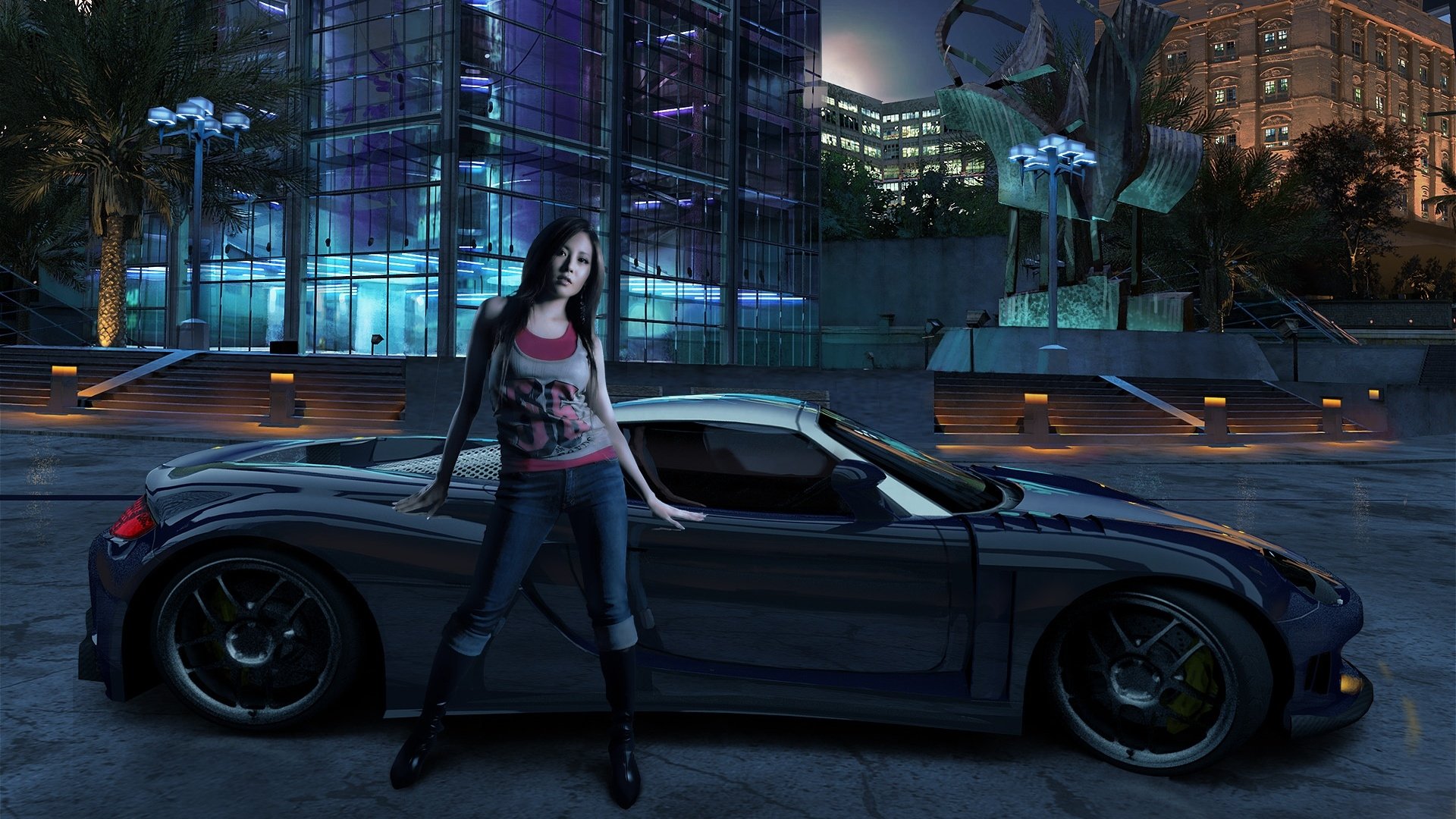 Overall Need for Speed Carbon is a Need for Speed game that didn’t manage to topple the greats of the series, but it does stand fairly tall among them. It’s better than a lot of the Need for Speed games that came before and many of the ones that came out after it. when you hear people talk about their favorite Need for Speed game you’re unlikely to hear Carbon mentioned, this is true. But considering how many games in the series have been released at this point and how many of them are quite good it says a lot about Carbon to still be one of the better ones, especially when you consider how short the development cycle for it was and how many versions were made that all ended up being reasonably comparable to each other. It might not be the first one that I would recommend to a Need for Speed newcomer but for anybody who’s already played the ultra-popular ones it’s an instant recommendation if you want more of the ideas that worked out and previous games with a little more refinement.