Hot Pursuit Remastered is a solid remaster of one of the best games in the NFS franchise.

Need for Speed: Hot Pursuit has served many purposes in the racing genre since the original was released way back in 1998. The original and its sequel, were fantastic additions to an arcade racing genre that was thriving, despite being somewhat outshined by their far more outlandish siblings in the Burnout series. Since then, a reimagining of those two older games resulted in Hot Pursuit in 2010 for the Xbox 360 and PS3. This was well after Burnout and most other arcade racers had run their course, so it stood apart from its competition much better that time around.

"The ability to choose between favoring the frame rate and a 4K resolution is a welcomed gift for PS4 Pro and Xbox One X players as well."

That isolation gave it a powerful spotlight and earned its reputation as one of Criterion’s finest non-Burnout games. Since then, even more emphasis has been put on realistic physics and ultra-high-fidelity graphics and sound, while giving a backseat to the crashing and bashing of the early 2000’s. But with games like Trackmania and Horizon Chase Turbo raking in the dough lately, the market for more pick-up-and-play racing games that focus more on style than realism is clearly still alive and well. EA, not being blind to this, has certainly taken notice by releasing a remaster of Burnout Paradise in 2018 and now Need for Speed: Hot Pursuit. So it’s come full circle. One of the Need for Speed franchise’s best games is now available in a slick remaster on modern consoles and PC, and just in time for its tenth anniversary, no less.

This new version of the game is not simply a better running version of the original. A remaster could certainly have gotten away with that, but Hot Pursuit Remastered does a few smart things, like including all of the original DLC, which adds at least six more hours of gameplay with 30 additional challenges, as well as trophies and achievements for those. On top of that, a whole host of visual upgrades including better textures, improved reflections and shadows, and better draw distances.

These upgrades are definitely striking on the cars themselves, but some of the lighting effects and environmental assets are, just as noticeably still, from ten years ago. Lens flares look flat, and background objects like trees and buildings don’t seem to have gotten nearly as much attention as the cars and roads. You’ll rarely notice this though, as you’ll be whizzing by them most of the time, but it is a rather obvious inconsistency when you do.

"The steady upgrade paths for both racers and cops holds up nicely here with a persistent stream of cars to unlock in each class and new events opening up all over the map. "

The ability to choose between favoring the frame rate and a 4K resolution is a welcomed gift for PS4 Pro and Xbox One X players as well. Perhaps the best thing that’s been added though is the ability to turn on cross play functionality in Hot Pursuit’s multiplayer modes. This will allow PlayStation, Xbox and PC players to all compete and compare times together, and gives players of the original game the ability to meet back up like old friends regardless of what systems they own today. If we combine that with -hopefully- some new players coming in who might have missed the original release, we could be in for a fairly robust community going forward.

Need for Speed: Hot Pursuit stood out back in 2010 for its emphasis on cop chases and stylish Burnout-esque takedowns, as well as its control style of being slightly more realistic than Burnout but still far more arcadey than the likes of Gran Turismo. This remastered version does just as much today as it’s not nearly as sensitive as the current simulation games out there, but does require significantly more skill than, say, Mario Kart 8 to get anywhere. It’s just as good a mix now as it ever was as almost anybody can be decent at it, but there’s also plenty of room for hardcore fans to be rewarded for further improvement.

The steady upgrade paths for both racers and cops holds up nicely here with a persistent stream of cars to unlock in each class and new events opening up all over the map. The variety of events is also still good enough to keep your attention, with the 1-on-1 duels and the hot pursuits being the clear stand outs. You’ll be going up against cops, other racers, and the clock in just enough ways to keep things interesting throughout, especially once you get good at using spike strips and road blocks and other items.

"The variety of events is also still good enough to keep your attention, with the 1-on-1 duels and the hot pursuits being the clear stand outs."

Weather and the time of day do play a role here with how tracks feel to race on, but it’s generally pretty subtle by today’s standards. While the class types and customization options for your cars feels downright shallow if you directly compare them to modern offerings in the genre, it also feels like a breath of fresh air to just play for a few hours, unlock a bunch of cars, pick one, make it a different color and get back on the road. There is a certain type of beauty in that simplicity that shouldn’t only belong to all the retro-style indie racing games of today. Even though Hot Pursuit is a 10-year-old game, it also fills the void of a modern-style racer with a more streamlined experience that doesn’t keep you bogged down in menus for any longer than it has to. The real focus of this game is always on the actual racing, and that’s one of its greatest strengths.

Aside from the general structure of the game holding up well, the moment-to-moment racing also still feels fantastic in 2020. Shunting a suspect from behind or slamming into the side of their tail for a devastating maneuver is just as satisfying as it ever was. While narrowly avoiding the cops as a racer, and maybe taking a couple of them out with spike strips or EMPs on your way to that precious finish line has also retained virtually all of its gratifying charm. 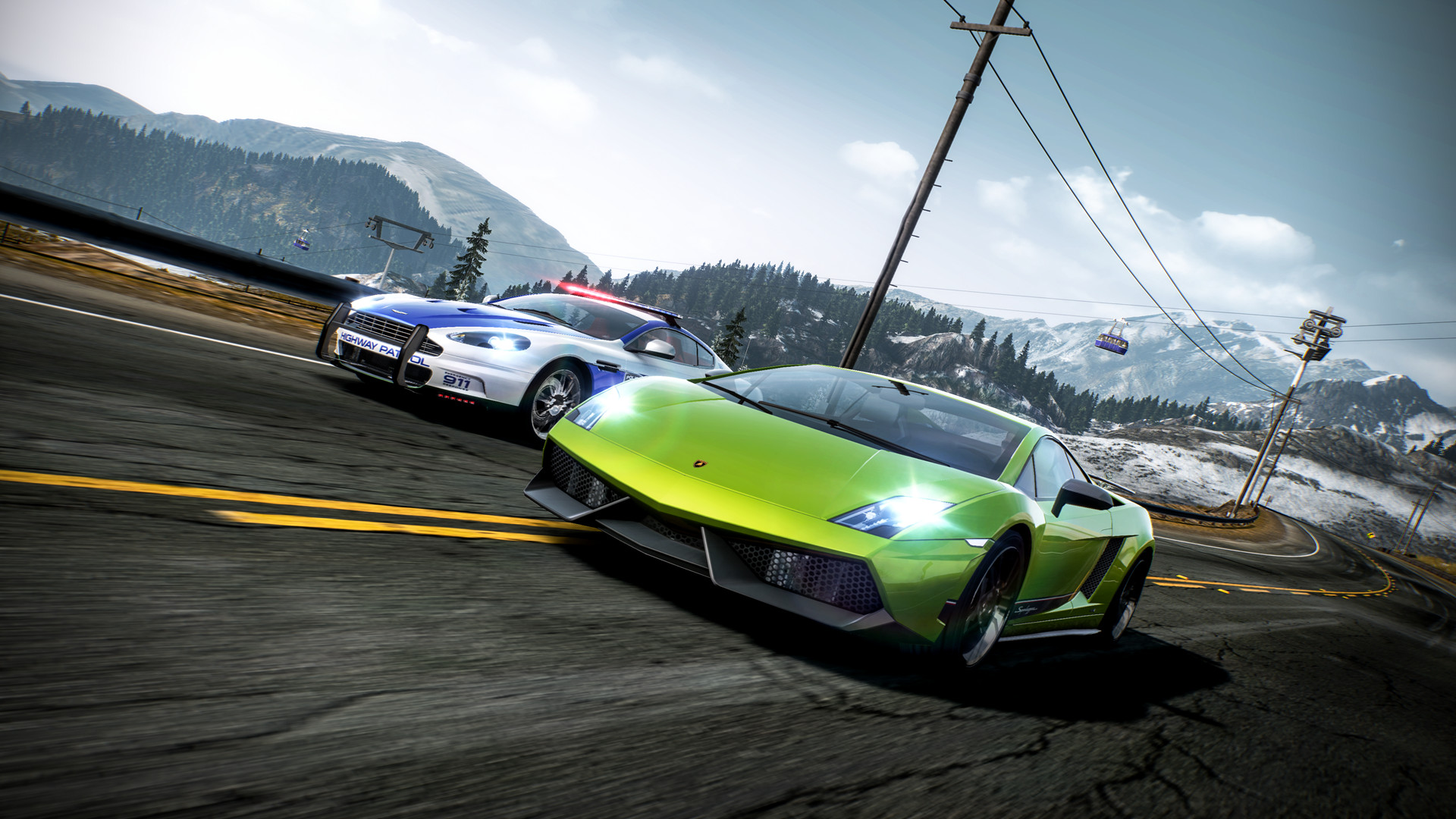 "Even though Hot Pursuit is a 10-year-old game, it also fills the void of a modern-style racer with a more streamlined experience that doesn’t keep you bogged down in menus for any longer than it has to."

With that, the game also unfortunately hangs on to its few-but-still-noticeable annoyances. The cop checkpoints are still threading a ridiculously thin needle than the need to be and the developer evidently couldn’t have been bothered to add in the inability to tilt the camera up or down to see over hills, which will absolutely result in the occasional, totally unnecessary crash, just like it did ten years ago. However, outside of things like that, Hot Pursuit Remastered largely does manage to get away with coasting on what a great game it was ten years ago with its gameplay.

Despite the few nitpicks I’ve mentioned, there’s no getting around the fact that Hot Pursuit is still a wonderfully snappy and nimble racer that, in this form, can easily steal your attention away from modern AAA racing titles. It’s a good remaster, but an even better racing game that mostly stands the test of time while still getting the heart pumping in all the right ways.

The gameplay holds up spectacularly well and is complimented with a solid face-lift and cross-play functionality.

More attention was clearly paid to remastering the cars than anything else, which creates a noticeable contrast at times. Also, certain mainstays of modern racing games, like a more flexible camera, are totally left out.

Final Verdict:
GREAT
Need for Speed: Hot Pursuit Remastered misses a few chances to really bring itself into the current era of racers, but it still has no trouble reminding you why it is one of the best racers of its time.
A copy of this game was provided by Developer/Publisher/Distributor/PR Agency for review purposes. Click here to know more about our Reviews Policy.