Payback is a massive disappointment.

The wind in your hair, adrenaline keeping you going, and a whole lot of speed to get you there, that’s exactly what Need for Speed: Payback by Ghost Games doesn’t have. While Need For Speed (2015) had its out-of-touch moments, Payback tries its hardest to solve many of its predecessor’s problems; unfortunately, the situation may have gotten a little worse in the process. From a ho-hum story, mandatory single player gameplay before being able to access the multiplayer, and a card game inside, Payback isn’t a lot of fun.

Payback starts off with the speed you’d expect from a racing game. A true no-setup style start gets you going right off, going down a dirt road at blazing speeds. It simply puts you in the middle of an arid desert in a fast moving car, ready to train you for what you’ll be expecting later in the game. It’s interesting how Payback introduces the characters you’ll be playing as. At first you’ll think you’re playing as one character then, with a seamless switch, you’ll be someone else. This allows you to interact with several different brands of cars during a single run. Now, you won’t be doing this too often throughout the entire experience, but when I did, I found it to be a nice touch — mainly for the simple fact that going back and forth between cars allowed me to really feel the differences in the build, models, and handling of these vehicles.

Soon after the intense introduction you’ll get into the thick of the story. I really didn’t know people played racing games for their story, but Payback has one, and it’s lame. You’re in the middle of a desert town — think of a fake Las Vegas. There’s glitz and glam, and — are you ready for this? — Payback. Here you’ll meet the man who you’ll be working for for a while exploring the lands of the city, along with the evil mafia-style organization called The House. The characters are so cliche, it’s sad. You will often be hearing lines that school and online kids like to throw around that are seriously cringe worthy. You’ll hear one-liners such as, “The House always wins,” or “You’ll be my Ace.” By the time the story was over I felt like a beaten animal. I had no brain cells left. Mediocre was written throughout the game’s script. 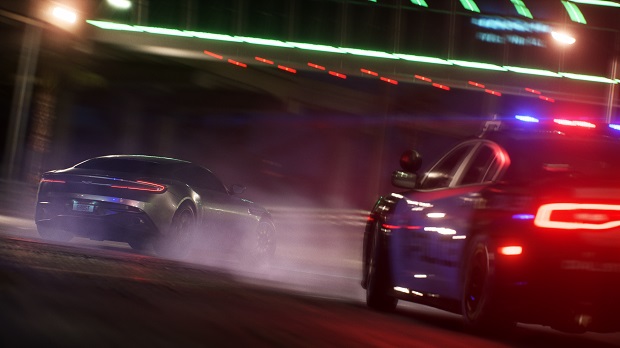 "From a ho-hum story, mandatory single player gameplay before being able to access the multiplayer, and a card game inside, Payback isn’t a lot of fun."

Graphics wise, Payback is good, but never great. The character models in the game are sadly average looking. You may be thinking: It’s a game about racing, it doesn’t matter if the characters don’t look good. And you may be right, but you’re also wrong. If the game is about its racing, then a forced story shouldn’t be put in the forefront of the entire experience. Luckily, they got the city’s details down pretty well along with the cars. Each car looks textured very well. You won’t find Forza quality detail and textures in Payback, but an arcade-spin makes that all right to accept. Smooth details around the rims and top of a BMW M2 looks realistic enough. And that goes for every model, as well. There is a large catalog of cars to choose from and they sound great, look good and perform reasonably well.

There are several options for customizing and fine-tuning your car to make it just the way you like it. But there’s a catch. You won’t be able to just pop into a garage and customize your vehicle. Nope. You’ll have to earn it and that can come in the form of completing different objectives around the map. It’s a little crazy when you think about how other games just make you purchase items by finishing races; but just a simple aesthetic change will force you to play the game in certain areas just to unlock the simplest custom item. And they aren’t just one to one races either. Need For Speed Payback is about pursuits, timing, chases, and objective hunting. Then there are the performance customization options. These options are trapped behind a very out-of-place card game that you must play to unlock performance enhancing attributes. This card game is performed by Speed Cards. You have six slots for your Speed Cards to fit into, and these cards are obtained through varying objectives: such as completing races, completing story checkpoints, and so on. You can purchase cards at the auto store but they don’t always carry the same cards as they are switched out every so often, and waiting for the rotation for the card you need may take a long time. 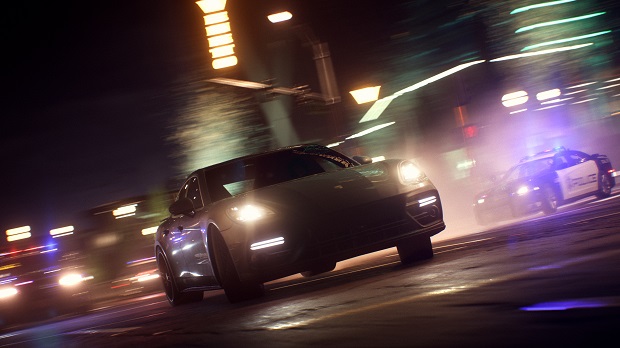 "The story will all too often take some of the more exciting elements of the game and place those into non-interactive scenes. It was fun to watch, but as a player, boring to experience."

As I mentioned earlier, each car does have its own unique feel and control. I found some harder to control than others (as per usual in most racing games), but nothing that felt awful. Frame rate is also stable and makes the experience of those split-second decisions where you have to drift or crash feel really well. I crashed a few times but didn’t notice any damage until the race was over, maybe I was just too hyped up to notice it? No. There isn’t much in this game that ever got me hyped up. You won’t be finding anything that doesn’t feel very linear in Payback. Police chases are based on set paths, and stunts are not a major part of the game, which is very sad for an arcade racer. While I was playing, it felt as though the developers wanted me to stay on the ground as often as possible, while stunts were performed in cut scenes a lot of the time. The story will all too often take some of the more exciting elements of the game and place those into non-interactive scenes. It was fun to watch, but as a player, boring to experience.

Before I get into how barren the online component of the game is, let me just say you aren’t allowed to just get on and play with your friends in a tournament. You have to complete chapter 1 of the game first. That may sounds simple enough, but the first chapter is actually quite long and can go on for some time. Games that force a mode on you before unlocking multiplayer isn’t unheard of but Payback is a racing and it really shouldn’t have such a restriction. Online is a mishmash of unrefined, rudimentary, and half-baked ideas that doesn’t always run. The online component of Payback is subtle at best; players compete in ranked and unranked matches for the most part, and race and drive around with your friends, and participate in pursuits. That’s all there is that I’ve seen. Online is as bare bones are you can get for now. Hopefully more will come soon. Besides, it crashed on me a few times so if there was more for me to see, it wouldn’t let me.

Overall, Need For Speed: Payback tried to make better on the 2015 reboot but falls far short. If the developers had put more thought into the final product, it might have turned out to be a great competitor to Forza Horizon. Online is locked until you’ve progressed far enough through single player, but even then it’s ghastly and the story is just as plain as it’s boring. And why did they add that card game?

If you’re a die hard fan who needs a racing game, there are so many better options that let you do what you want, when you want. Payback isn’t one of them unfortunately.

The cars look great, in-game locations are quite detailed.

Final Verdict:
AVERAGE
2017 is a cracking year for racing fans but unfortunately for Need for Speed, Payback doesn't stand tall amongst the likes of Forza Motosport 7, Gran Turismo Sport, Project CARS 2, DiRT 4 and F1 2017.
A copy of this game was provided by Developer/Publisher/Distributor/PR Agency for review purposes. Click here to know more about our Reviews Policy.