Keep these handy pointers in mind as you zoom through the streets of Lakeshore City.

Need for Speed is back, as is Criterion, and that one-two punch makes the launch of Need for Speed Unbound quite a significant one. EA’s racing franchise hasn’t had the best of times over the last few years (even though 2019’s Heat was a decent racer in its own right), but by all accounts, it seems like Unbound is a welcome return to form for NFS. Many players have jumped into the driver seat to race through the streets of Lakeshore City, and if you, too, are about to begin that journey, here, we’ve compiled a few beginners tips and tricks that should help you get to the top of the podium and expanding your collection of vehicles as quickly as possible.

Unsurprisingly for a Need for Speed game, Unbound puts quite a bit of emphasis on smartly using your car’s nitro boosts during races, which means having a healthy supply of NOS tends to be vital more often than not. NFS Unbound lets you do that in a number of ways- essentially, the more skills, tricks, and dangerous driving moves you pull off, the more NOS you’ll accrue. That, of course, means that the game always encourages things such as drafting, drifting, stunt jumps, near misses, driving into oncoming traffic, and more. Of course, there’s an element of risk here, but the rewards are well worth it.

SAVE YOUR NOS UNTIL THE FINAL LAP

No, that doesn’t mean you shouldn’t use it at all until you get to the final lap of a race- and given how quickly you can fill up your NOS, you don’t really need to. What that means is that you should try and have as much of it as you can when that final lap begins. Need for Speed Unbound uses AI rubberbanding quite prominently at times, and more often than not, that’ll kick in in the final lap, when the race is close to being finished. In those situations, where you’re seeing your opponents gaining on your or possibly even overtaking you, you’re gonna want to use up as much of your NOS as you have so you can get to the finish line first. 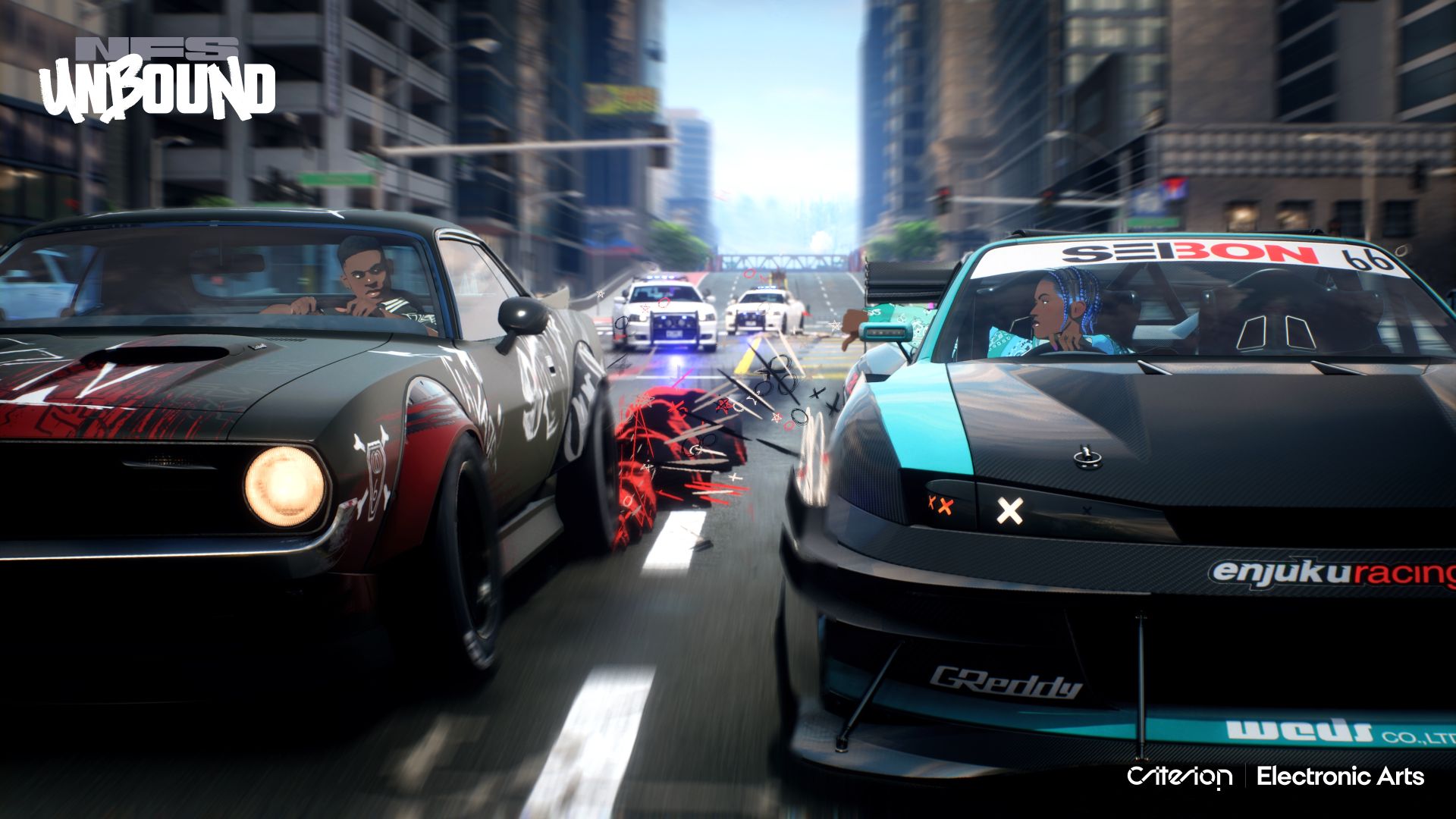 As you’d expect from an arcade racer such as this one (especially in this franchise), drifting is quite an important part of Need for Speed Unbound’s gameplay core. Combining your boosts with drifts, however, can often be just as important. Obviously, when you drift into tight turns, you’re going to lose plenty of speed, which means the best option is often to unleash a little bit of your boost as soon as you exit the drift so you can put some more distance between you and those behind you.

Need for Speed Unbound’s system for earning money has a lot in common with 2019’s NFS Heat, in that the game requires you to manually bank all of the money you’ve earned during a particular day or night session by heading back to the garage. If you get busted by the cops before you’re able to do that, you lose all of the cash you had on hand. As such, it’s a good idea to regularly keep heading back to your garage to bank the money you’ve earned. 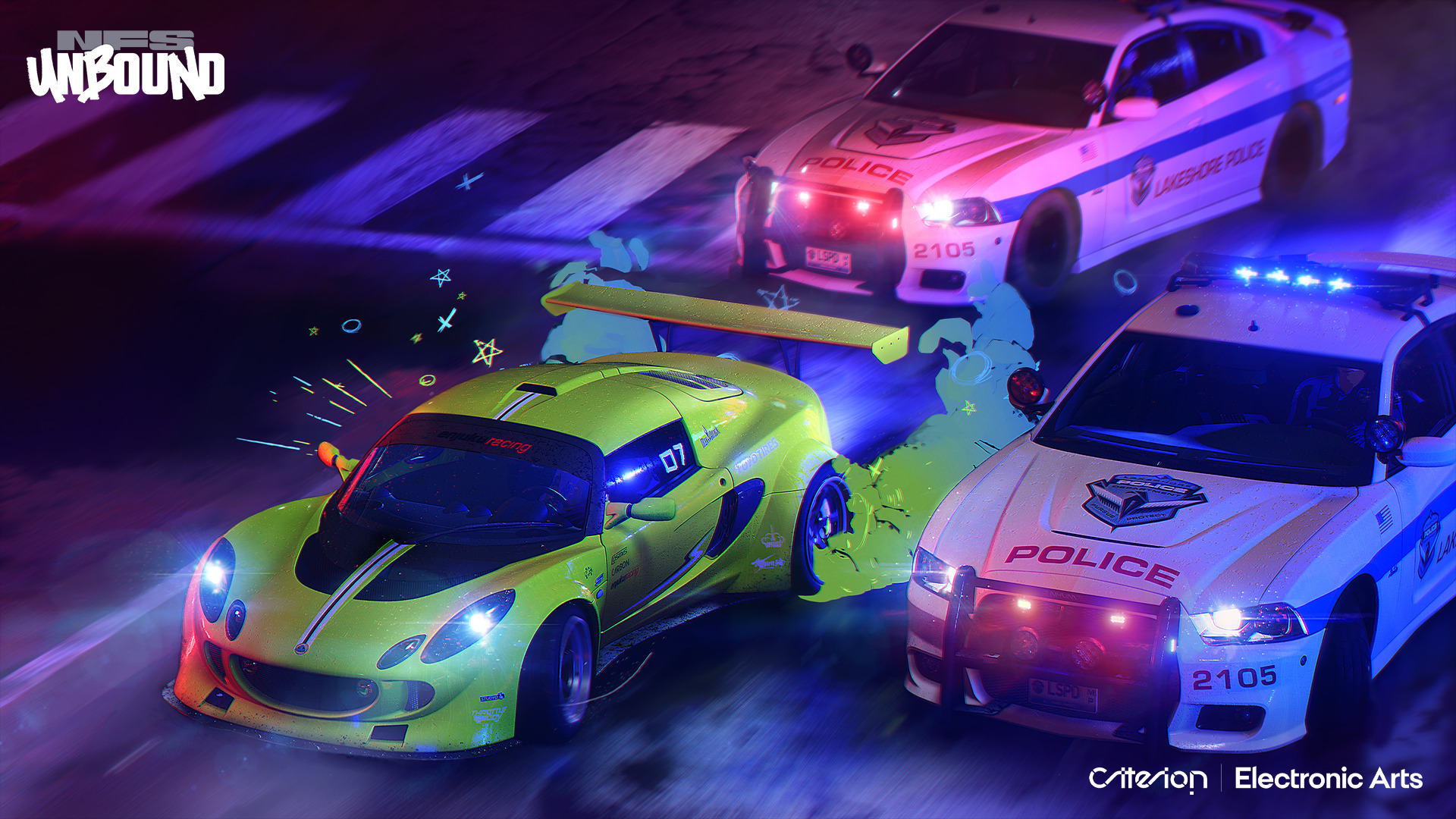 Of course, as much as you might try to avoid it, cops are everywhere in Need for Speed Unbound, and your activities will invariably attract their attention, which means knowing how to lose your Heat level is vital. There are obvious ways to do it, of course, from taking down cops to escaping to simply outrunning them, but a much more effective way is to find a quiet spot – preferably an alleyway or a dirt road that’s out of site – and then turn off your car’s engine by pressing the circle button on PlayStation or the B button on Xbox. It’s not a foolproof method, but it tends to work quite often.

Getting a good start to your race is key in Need for Speed Unbound, because you’ll often find it hard to catch up to your opponents at the very front otherwise. The key to doing that is getting the perfect launch. Every car has a small bar on the screen that dictates a small window for revving up your engine- rev it up too much or too little, and things won’t start too well for you, but if you rev it up just enough to fall in that small bar when the race begins, you’ll get an early speed boost. The timing to get a perfect launch is different for every car, so make sure you’ve got it nailed down regardless of what vehicle you’re heading into a race with. 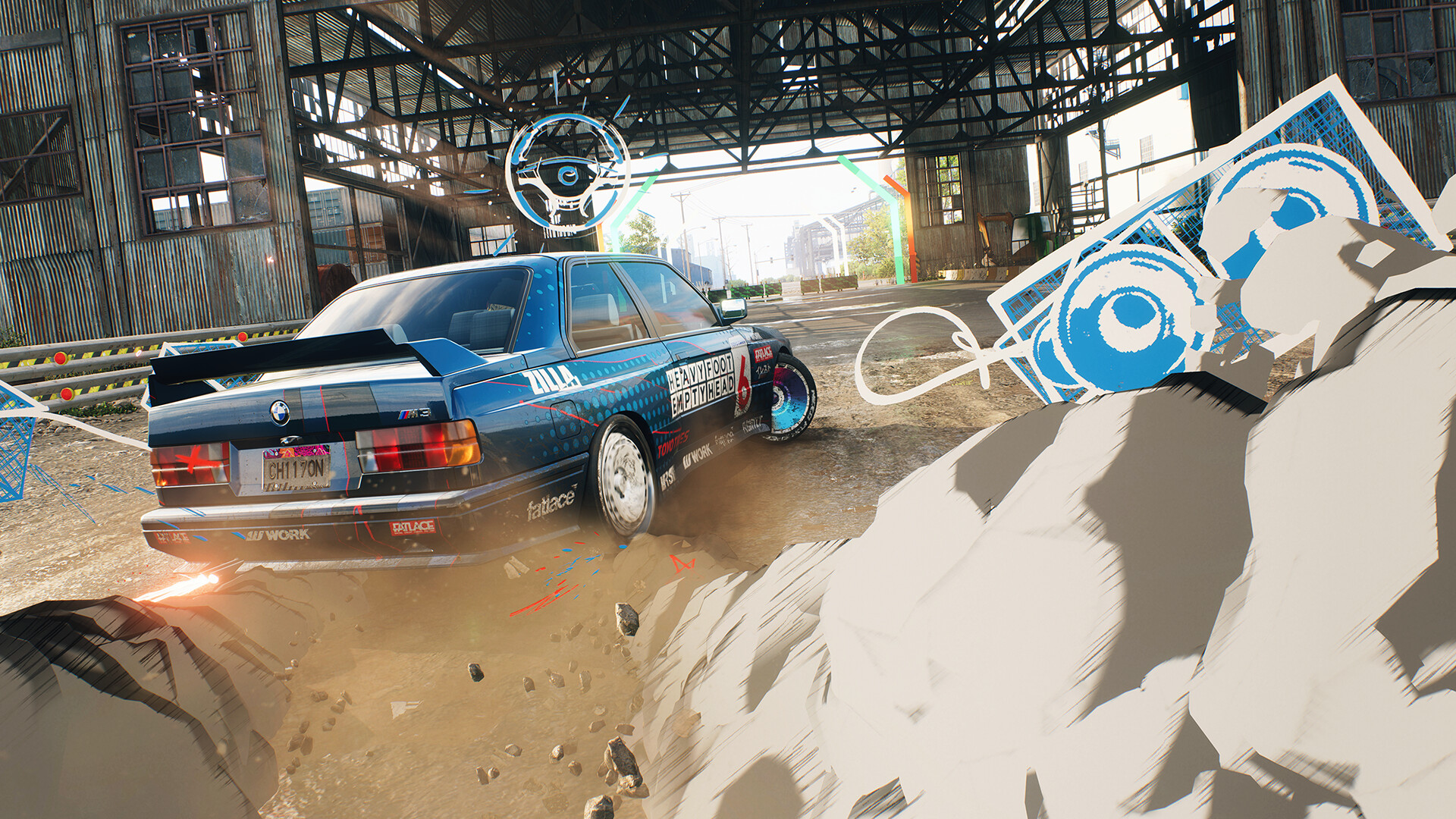 For the most part, you’re going to want to spend the money you’ve earned on new cars and upgrades, but make sure you’re saving some of that to spend on buy-ins. One pretty neat mechanic in Need for Speed Unbound allows you to bet against one of your opponents for a race- if you finish higher than them, you get the payout. When you’re picking who to bet against, however, make sure you’re picking someone whose vehicle isn’t much more upgraded than yours is. It’ll be a much bigger bet, yes, and that might seem tempting, but if there’s a good chance that you end up losing the race and the money, it’s best best to just go with a relatively safer option instead.

Very early on, Need for Speed Unbound will ask you to pick your first car, and give you three choices. You’d expect that in a racer, that would be a big decision, but thankfully, the game wants to keep things quick, especially in the early goings. All three vehicles available at the beginning of the game are on roughly the same footing, while it won’t be too long before you get access to more (and much better vehicles). That first choice isn’t one with too much weight, so you don’t need to spend too much time on it. 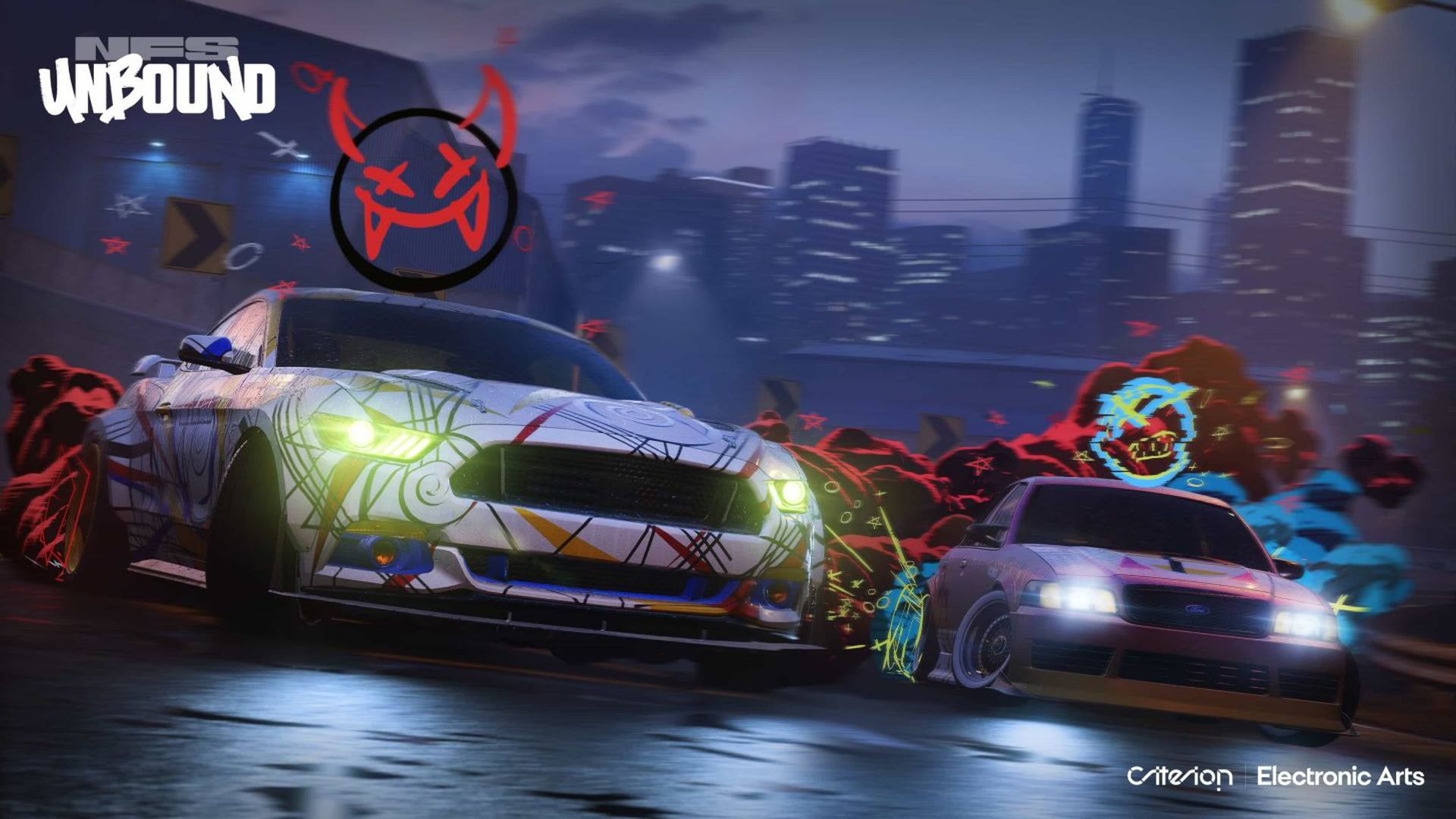 That applies to the game’s prologue section as well. Need for Speed Unbound has a handful of races and events on offer in its prologue section, but that serves as little more than an introductory sequence to get you into the groove of things. The bulk of the game and the prologue preceding it are separated by a time skip, and there’s a pretty clean break between the two. Things don’t really kick into the gear until the prologue is over, which means this is one of those times where rushing through things to get to the meat and potatoes of the experience isn’t such a bad idea.

Let’s end things with a rather general suggestion. Need for Speed Unbound is, of course, an open world racer, and like other games in its genre, it populates the open world map of Lakeshore City with a number of different side activities. While you might be tempted to jump from race to race, we would recommend exploring the city and engaging with the optional activities- and not just because they’re fun (which they are). Activities like finding collectibles, breaking billboards, completing challenges, and others also yield cash rewards, and are a great way of building up your balance so you can spend more on cars and upgrades.