An exercise in nostalgia.

Nintendo has, more than any other company in the industry, the biggest catalog of classic games and franchises accumulated over nearly thirty years. From its arcade beginnings to the games that it brought to the world dominating and industry reviving Nintendo Entertainment System, to more modern classics on the 3DS and Wii U, the company has ceaselessly created some of the best experiences in the industry over the years, and it has never shied away from returning to its past glories, re-releasing its classic games to, some would argue, the point of cynical rehasing.

At first glance, that is what NES Remix looks like- yet another re-release of some classic NES games, broken down and thrown together in one hastily put together package and priced at a seemingly exorbitant $15. At first glance. First impressions can often be wrong, you see, as they are in this case. Because the more you play NES Remix, the more you realize that somehow, incredibly, Nintendo has taken the simplistic 8 bit efforts of the NES era and synthesized them into new, addictive games that will appeal to one and all. 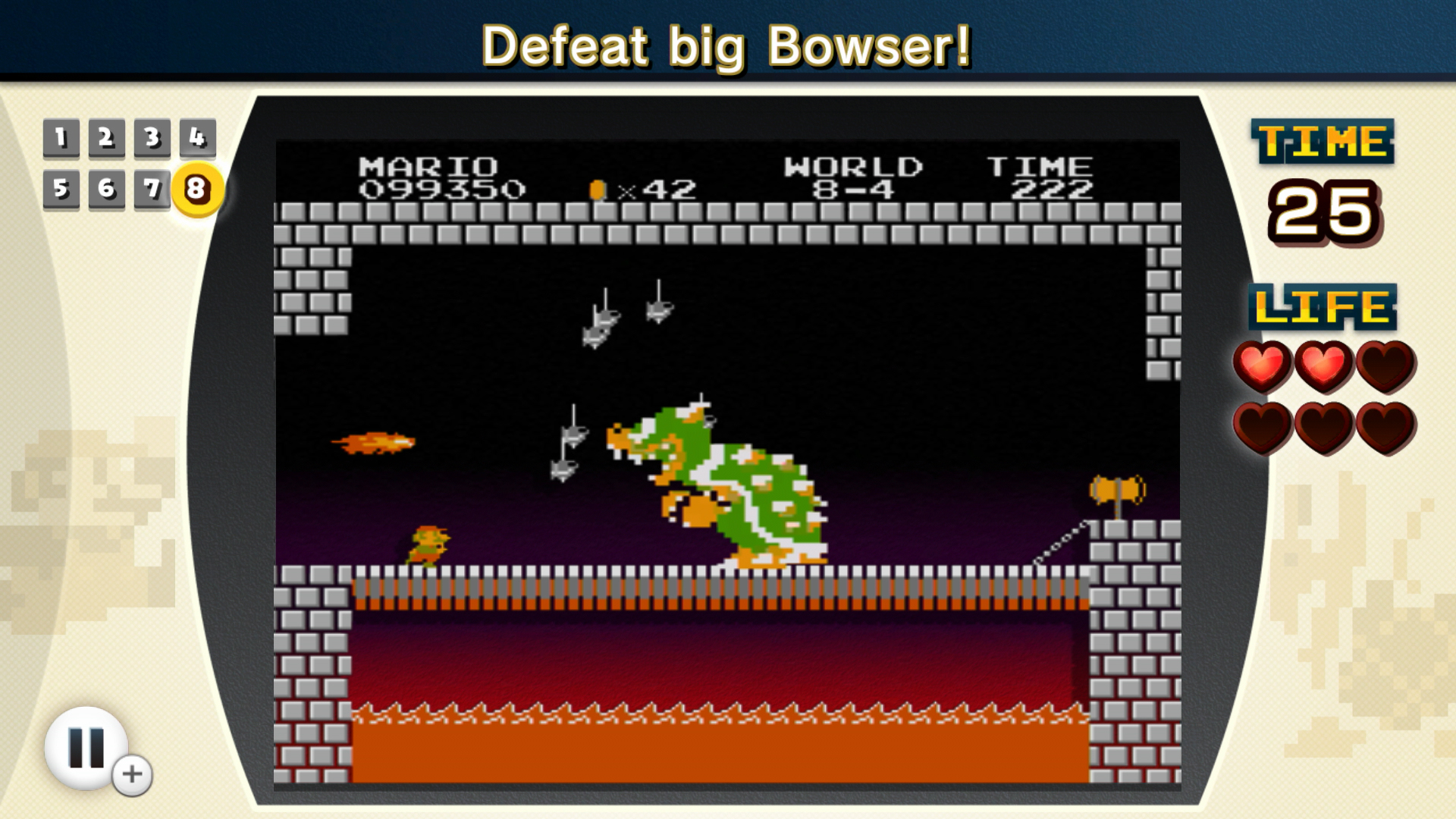 "NES Remix takes a long list of classic Nintendo games- we're talking over fifteen games here- and breaks them down into themed 'minigames,' giving you objectives that take the expected mechanics of the game and turn them on their head, forcing you to rethink how you approach the games. "

NES Remix takes a long list of classic Nintendo games- we’re talking over fifteen games here- and breaks them down into themed ‘minigames,’ giving you objectives that take the expected mechanics of the game and turn them on their head, forcing you to rethink how you approach the games. You might be expected to kill a certain number of enemies within a given time limit, or you might be asked to navigate an existing stage with a new perspective. It’s basically a microcosmic look at these games that set the standard for the gaming industry for the decades to follow, examining all their mechanics and gameplay systems, and forcing players who are familiar with them to unlearn what they know and try again. It’s like meeting an old friend, who is still vaguely the same after all these years, but every time you get too comfortable with him, it turns out he has changed completely.

Of course, the impact of this will be almost entirely lost on you if you don’t have familiarity with these NES games in the first place- in that case, these will just come off as simplistic mini-games that might be admittedly addictive, but are ultimately nothing special (and certainly not worth the $15 asking price). And although even those who don’t have any context for the games on offer can extract significant mileage from the title because of its Angry Birds style star scoring system at the end of every level, on the whole, unless you are at least somewhat familiar with Nintendo’s history, you might be left feeling a bit cold.

If you are familiar with that history, though, NES Remix just works, and it tickles the imagination, constantly delighting, as you keep on playing, trying to figure out how your favorite game of yore has been reimagined and reinvented this time, and trying to master it once you do.

But all of that said, the true meat of the game comes from the titular ‘Remixes.’ These have to be unlocked, but once they are, they completely change the equation, forcing you to actually stop and marvel at the jarring incongruity on display. From having Link navigate Donkey Kong’s arcade level, with the impediment of not being able to jump, to having you play Super Mario Bros.’ World 1-1 during night time, there are no limits, as the developers gleefully break all the rules that the original games set for the player, make new ones, and throw the player into the deep end. The ‘Remixes’ are the star of the show, and especially for the long time Nintendo player, can almost justify the investment entirely by themselves. 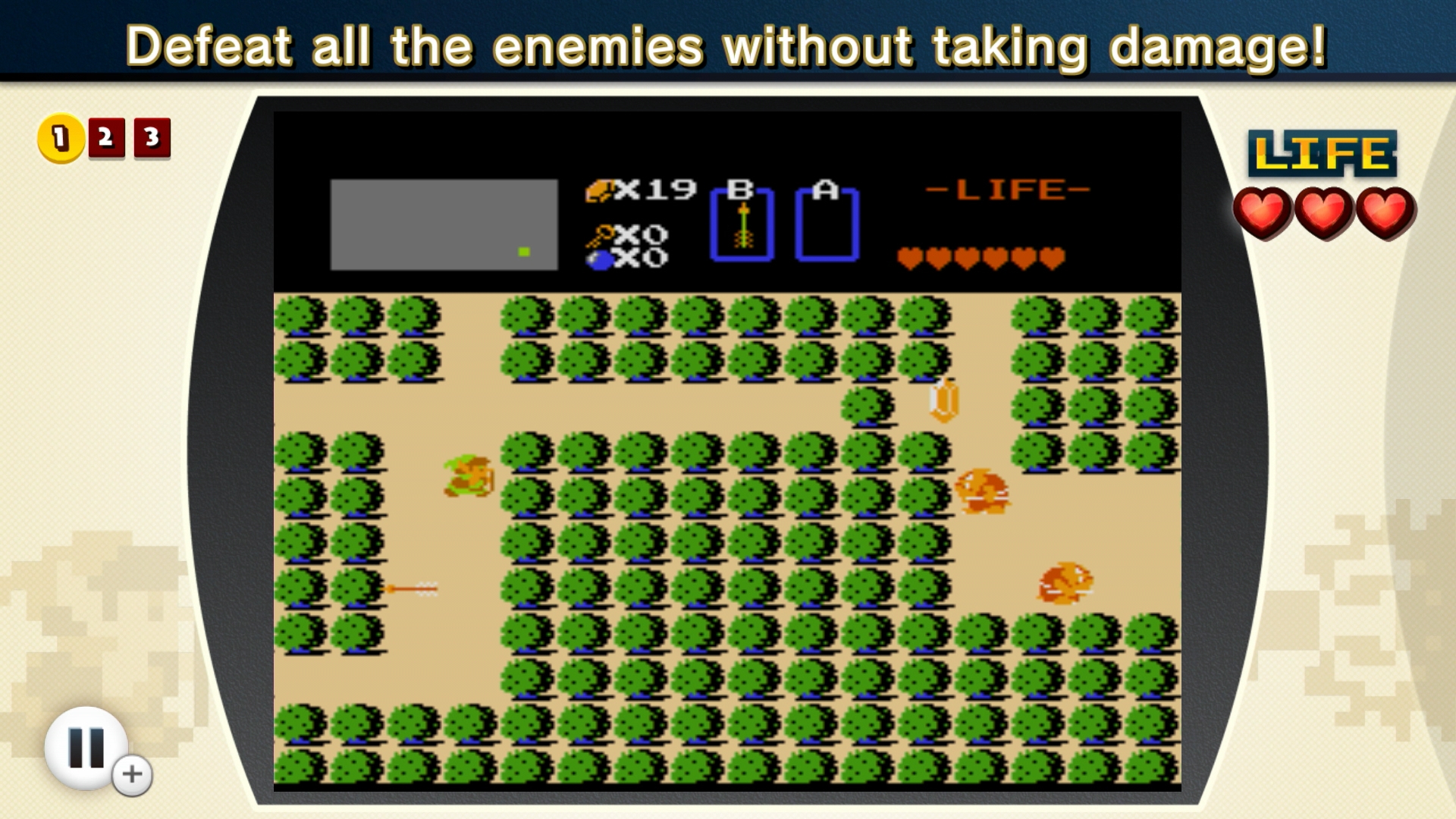 "Ultimately, your mileage with NES Remix is entirely dependent on one thing above all- your familiarity with Nintendo's past and your nostalgia for it."

With over fifteen games and a ton of challenges that can take you anywhere from 10-15 hours to complete, NES Remix certainly seems to justify its asking price, especially for the player acquainted with Nintendo’s classic past. But there are some omissions that have been made, which are conspicuous by their absence. For instance, there is a definite missed opportunity for a multiplayer mode, local and online, and the accompanying leaderboards and the like. On the other hand, NES Remix embraces Nintendo’s Miiverse, and the Stamps achievement system, so it does add some concession for the player to return to the games and keep playing.

Ultimately, your mileage with NES Remix is entirely dependent on one thing above all- your familiarity with Nintendo’s past and your nostalgia for it. If you have these in any appreciable quantity, you will absolutely love NES Remix, and find it to be worth more than the $15 asking price. If you do not, then while you will still enjoy the quirky design on offer here, you probably will not find it to be your money’s worth, and would be best advised to wait for an eShop sale.

NES Remix is like a museum that has mucked around with its exhibits to great effect. It’s a wonderful, lunatic, quirky offering that offers Nintendo’s past through a new lens and new perspective, adding some substance to our nostalgia.

Quirky, unexpected, surprising game design; highly addictive and replayable; tons of content; adds a new twist to every Nintendo classic that it tackles

A lot of its impact is lost if you don't have nostalgia for the games NES Remix deals with; missed opportunities like multiplayer

Final Verdict:
GOOD
NES Remix is like a museum that has mucked around with its exhibits to great effect. It's a wonderful, lunatic, quirky offering that offers Nintendo's past through a new lens and new perspective, adding some substance to our nostalgia.
A copy of this game was provided by Developer/Publisher/Distributor/PR Agency for review purposes. Click here to know more about our Reviews Policy.