New Mass Effect 3 Details: Story, Multiplayer And The Future Of The Franchise 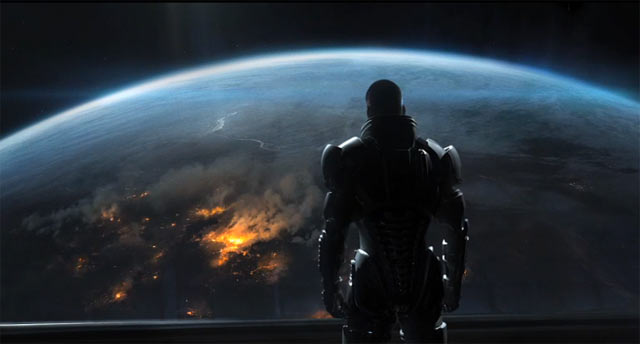 A user at neogaf has posted some interesting tid bits about Mass Effect 3 from a Spanish Magazine.

-The reason that Cerberus is put against us is explained at the beginning of the adventure (could it be because the Alliance gets the Normandy SR2 and technology, and SID, the AI ​​of the ship? This a suppose of mine, not in the magazine)
– Cerberus’ troops: mechas, assault units, shock troops ninja-style.
– Reapers: they have different sizes, ranging from 500-600 meters of the smaller ships to the 2km for Herald.
– New skills for Shepard: launched in search of coverage to Max Payne, rolling, jumping small holes in the ground, as the SWAT turn and strike the enemy with greater variety of melee attacks. It specifically mentions “a new class: Heavy Melee” take advantage of these capabilities of combat.
– New skills: Engineer can build turrets.
– Customizable Weapons, guns, sight … five variants in each section.
– More items to “loot.”
– Space Battles? Perhaps, but unconfirmed.
– Scenarios: larger. We will see people walking, ships fighting, architecture in greater detail. Searching for the photorealism of the sites using new lighting techniques on the stage. It has also improved the atmosphere and the number of dynamic elements of the stage, increasing interactivity with the player.
– Locations to visit: New York, London, a moon of ¿Koriana? (maybe they mean Quarian or Krogan) world, a salarian world and Mars, among others. The development of each environment takes about 6 months, testing the levels from the outset.
– Enemies: we can do dynamic damage into them. The Cerberus mechas, for example, requires that we shoot a weak point, the glass cockpit in order to overcome them. In other enemies we can cut off the arms, break the head or break various pieces of their armors.
– Fighting more dynamic, forcing us to move more frequently. The game speed is improved by 10 to 15%.
– Exploration: we won’t drive vehicles seen in previous games. The main gameplay is designed without them and will continue so. This does not mean that there is no vehicle, but they can’t reveal more now. There is a new scanning system.

I looked through the scans and google translated the details they gave about the future of the series after Mass Effect 3.

Originally Posted by BioWare:
This being the end of the trilogy, can we expect in the future?

With Mass Effect 3 closes the history of Shepard, but the universe that we created is still there, with many possible stories to tell. I see many possibilities in the future from an MMO to a degree of action in first person or even why not a platformer. It all depends on what players we ask in the future.
Originally Posted by BioWare:
Mass Effect 3 will have multiplayer?

We’ve always wanted to include it, since the first Mass Effect. Explore ways to be able to offer for each delivery, but noestamos fully convinced of the solutions we have found so far.

Stau tuned with GB for more news and updates.