New Super Mario Bros. U Deluxe Review – What Is New Is Old Is New Again

A strong core platforming package shines through whatever other faults the game may have.

Nintendo has been no stranger to pillaging the corpse of the Wii U and bringing over just about every notable game of any quality over to the much more poplar Switch. Games like Mario Kart 8, Captain Toad: Treasure Tracker, Bayonetta 2, Pokken Tournament, Donkey Kong Country: Tropical Freeze, and Hyrule Warriors are just among the many titles from that that have been brought over to the Switch to enamour them to a new audience. The newest Wii U game to get this treatment is also the oldest Wii U game, technically speaking. New Super Mario Bros. U Deluxe brings over the console’s launch game to the Nintendo Switch, giving the accomplished 2D platformer a new lease of life on a system on which it is bound to find a more receptive audience.

New Super Mario Bros. U Deluxe is a fairly straightforward port. The additions here are minimal—you get the base game, you get the New Super Luigi U expansion pack, and you get some minor changes, such as the addition of the new character Peachette, and her fan fiction motivating Power Crown power-up. Apart from that, the port is faithful to the original game to a fault—for instance, in spite of the fact that the Switch is a portable system, the original’s save system is retained here as is. You can only save after you clear castles, and you have to rely on Quick Saves otherwise. It’s a compromise that works, but there’s no reason Nintendo could not have adopted the much superior auto-save functionality from Super Mario 3D World for this port, for example.

New Super Mario Bros. U Deluxe also loses something in the transition to the Switch—specifically the Miiverse functionality that was actually fairly integrated in the original release. Given that Switch has no Miiverse, that feature is understandably axed. Personally, it was a neat idea, allowing players to leave Dark Souls style messages about stages, and tips and tricks, that would show up directly in the game’s overworld map, and its loss is disappointing, if ultimately irrelevant to how the larger game plays 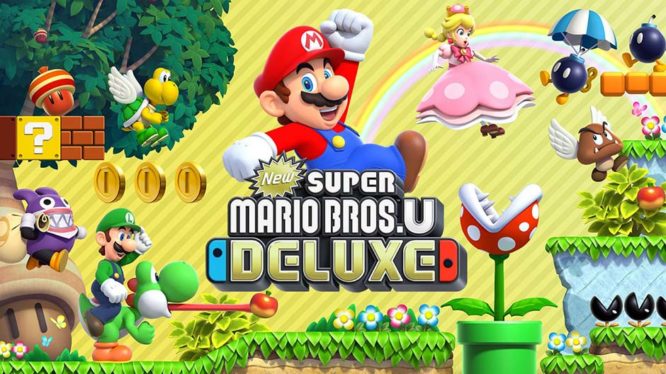 For all the complaints I have made about the game, however, New Super Mario Bros. U Deluxe is actually a very compelling package. This is because of how strong the core game is. When it launched in 2012, it was the strongest 2D Mario games released since Super Mario World—indeed, it would not be remiss to say that it is one of the strongest 2D Mario games ever, alongside World and Super Mario Bros. 3. While the game was an unfortunate victim of New Super Mario Bros. fatigue, as well as being on the Wii U, at launch, it’s undeniable just how accomplished the core design really is. While earlier levels are relatively more vanilla, later ones become devilishly designed, demanding players pay attention, and testing their skills and reflexes to an alarming degree. Some of the best levels in Mario history are to be found in this game (especially once the Luigi U package is considered), and while the mechanics aren’t new here—the New Super Mario Bros. formula was pretty well run into the ground by the time this game came around—they’re applied in delightful, whimsical ways, leading to some of the most inventive 2D platforming the Mario series has ever seen.

New Super Mario Bros. U Deluxe also pulls off the almost-impossible, in being a platformer that is every bit as satisfying to play single player as it is in co-op. The game supports local co-op for up to four players much like the Wii U original did (as well as the Wii game in the series did), with support for every Switch controller configuration imaginable (single Joycon, dual Joycons, Pro Controller alike are all supported). Playing the game in co-op is a riot, and every bit as fun as playing it single player is, while adding an element of randomness to proceedings. With later levels in the game, playing in co-op also necessitates players actually work together rather than just screw around, in order to get through the levels. It’s a delight to see just how well constructed the levels are to be so fulfilling while playing solo or with others alike.

The game also controls exceptionally well. This comes as a surprise to approximately zero people—barring the more controversial Super Mario Sunshine, there has never been a Mario game that controlled anything less than sublime, and New Super Mario Bros. U continued that proud tradition in 2012, and still stands strong more than six years later. The controls, mechanics, and exceptionally strong level design come together to create a potent platforming package overall, then.

There are issues, however. In addition to the ones I’ve already listed above, Boost Mode, which was where one player played with the Wii U GamePad, and could create platforms to help (or obstruct) other players, is gone. It was an exceptionally helpful mode for parents to help their kids along, and its absence is sorely missed. Happily enough, a Super Easy Mode in the form of Nabbit as a playable character is available, so younger players still have something to fall back on. 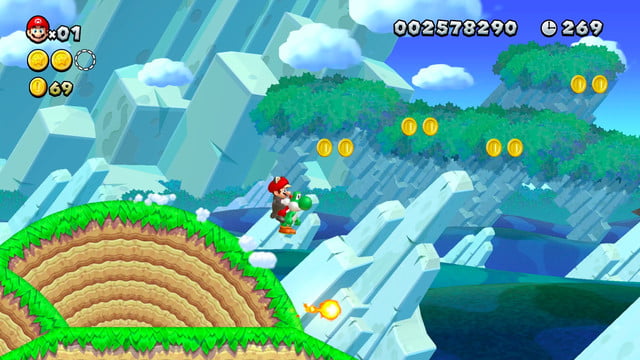 "The art style and soundtrack also won’t win any plaudits. The game looks sharp enough, but the New Super Mario Bros. artstyle is widely decried for lacking personality, and it’s hard not to agree with that."

The art style and soundtrack also won’t win any plaudits. The game looks sharp enough, but the New Super Mario Bros. artstyle is widely decried for lacking personality, and it’s hard not to agree with that. The soundtrack, while catchy, is similarly tailored to be so inoffensive, it ends up being offensive in its inoffensiveness. Those were problems in 2012, and they’re still problems now (though the over six years that have passed between this re-release and the last New Super Mario Bros. release do make the art and music feel less played out).

A personal gripe I have is also the lack of online play. New Super Mario Bros. U Deluxe is incredibly fun in co-op, and nothing changes that, but it’s a shame that I can only play it with people physically present in the same room as I. Online co-op would make this game an extremely easy recommendation, even if it was limited to just with friends. It just seems like a missed opportunity.

For all the many complaints I have about the game, however, it’s undeniable how strong it is in the one area that matters, which is the core gameplay. Strong level designs, top of the class mechanics, and great controls lend to a great blend of platforming excellence, enjoyed solo or with friends alike. It’s not the best platformer on the Switch, but it’s one of the better ones, and if you’re even vaguely interested in the genre, it’s a game that comes thoroughly recommended.

Exceptionally strong level design, highly tuned mechanics, very tight controls, great fun to play solo and in co-op alike, features a whole lot of content thanks to the inclusion of the base game with New Super Luigi U

The save system feels out of place for a portable system, the art and soundtrack won’t win any awards, Wii U specific functionality like Boost Mode and Miiverse integration are all gone

Final Verdict:
GREAT
An incredibly strong platforming package is enough to overcome what problems, old and new, this offering has. New Super Mario Bros. U Deluxe is recommended to all platforming fans.
A copy of this game was provided by Developer/Publisher/Distributor/PR Agency for review purposes. Click here to know more about our Reviews Policy.