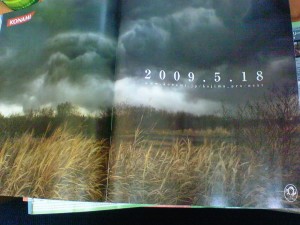 May 18th, 2009 is a date that you should write in down in your note books. Because that’s the day Hideo  Kojima’s next big game is going to be probably announced. An advertisement appeared in one of the Japanese gaming magazines which had the following picture in it:

The image clearly shows that Hideo Kojima is going to annouce something special on 18th, May 2009. And we think that its going be the next Metal Gear. Now let me support my claim with a few facts :

At GDC, 2009, Hideo Kojima gave an awesome presentation in which he mentioned MGS5 many times. Below is one of the images from that GDC conference : 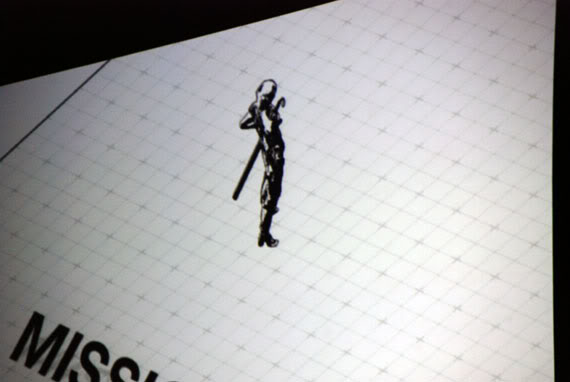 At the end, Kojima gave his thoughts on MGS5 and on the slide show was the image of a man with sword. Now a man with a sword has to be none other than MGS2 main  protagonist Raiden. Now again look at the image from the TOP. There are clouds which are in the form of a Snake. Also its giving an impression that its going to rain soon or a lighting is going to strike.

Now let me take you back to MGS4 , during one of the cutscenes , a discussion betwen Raiden and Snake takes place :

Raiden : It even rained the Day i was born, i am unlucky from the start.

Snake:  No, Raiden, you were the lightening in the rain.

Also many times in MGS4 , whenever Raiden use to make an apperance , sort of lighting will happen specially in the last scene. An appearance of a snake in the cloud and an impression thats indicating a lighting …… gives ample eveidence that the next Metal Gear installment is well on the way. Remember in MGS4 Solid Snake is not shown to be dead. We will keep our fingers crossed. Check back again on May 18th, 2009, till than you can give your thoughts in the comment section below.

The Day Before Will Reportedly Receive 10 Minute Gameplay Showcase Today

The showcase was announced on the game's Discord and nowhere else. It will be an "experience like no other" th...