A mixed bag of greatness and mediocrity.

There are sports you really “get” and then there are sports you really want to “get”. Hockey has always been the latter for me. There’s so much to love about hockey, so when playing this year’s NHL 19, I was going in with a deep-seeded desire to expand my knowledge of the beloved sport and grow alongside my skater. I didn’t want to just slap a puck around willy-nilly while button-mashing after all.

Since I hadn’t played a game in the series since 2015, I booted up this iteration with the initial goal of finding the tutorials and learn from the ground up. My existing (albeit rudimentary) understanding of the sport helped me grasp the basics right away, and the excellent training setup gave me the rest of the information needed to fully invest in the game. EA has succeeded admirably at offering accessibility for rookies and pros alike. The level of difficulty customization offered is above and beyond, and while I opted for the lowest setting to begin with, I never felt that the game was dumbing itself down. If anything, the Rookie setting felt like a great amount of control while keeping things like poke and body checks a simple button press away. While I definitely delved into the game’s harder settings a bit, I settled on the second option after a few hours. 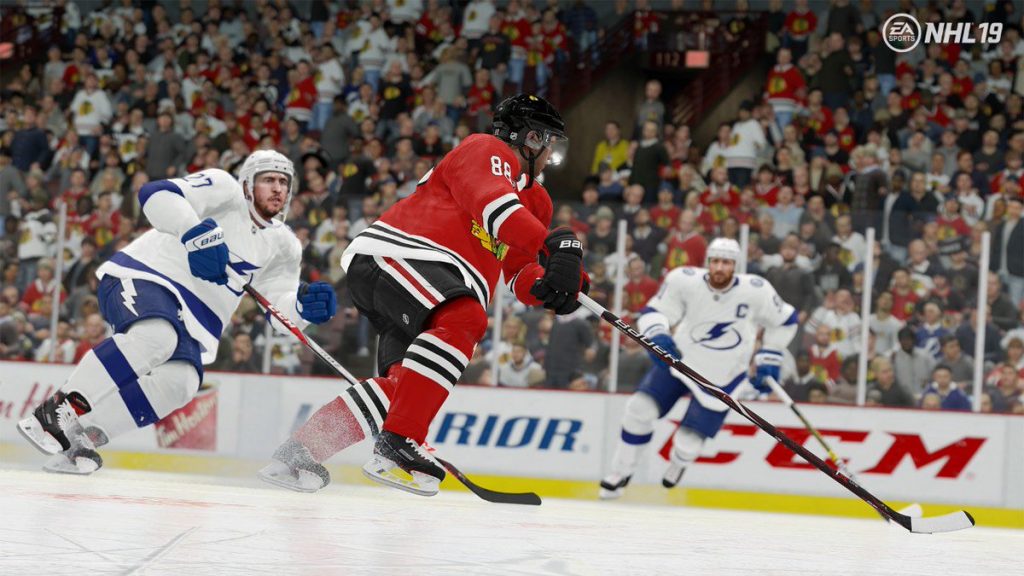 "Thankfully, most of the modes are enjoyable enough once you wade through the myriad menus and actually dive into a match."

While the game succeeds in its difficulty features, it’s a shame it drops the ball in its navigational accessibility. I appreciate EA’s obvious desire to pack in plenty to do, but there’s a distinct lack of focus in NHL 19’s menu presentation. The main menu is a plain collection of 18 total boxes, each linking to a game mode or features like rosters and settings. It’s as boring as it is inconvenient, and this cumbersome navigation extends to individual mode menus as well. You can pin three of your favorite modes to a home screen, so this issue can be somewhat alleviated for people mostly interested in only a few types of play. For anyone looking to get the most out of the game, however, you can expect a lot of tedium.

Thankfully, most of the modes are enjoyable enough once you wade through the myriad menus and actually dive into a match. The most overall exciting addition to NHL 19 is World of Chel, a new online hub spanning various interesting modes alongside progression features. There’s a bevy of collectibles to chase after, outdoor rinks, and a really cool 1v1v1 mode that really brings out a playful side to the game. I had quite a lot of fun messing around with Pro Am in World of Chel’s. Going up against a mixture of new and legendary NHL skaters in a collection of fun challenges is among the best options in the game.

As expected with most modern sports games, Be A Pro mode offers players a career mode with a long trek from humble beginnings to a spot alongside the pros. But I found it the dullest of the modes, especially after seeing what EA has achieved with its other major franchises over the last few years. Unlike a franchise such as FIFA, there’s just not any engaging narrative or truly captivating sense of progression. I opted to spend most of my game time with NHL 19’s Threes mode instead, which plays out with teams of three in quick, frantic matches with a few altered rules to make things interesting. Since the career mode was such a let down, it’s great to see EA toss in these types of unconventional modes to balance things out. 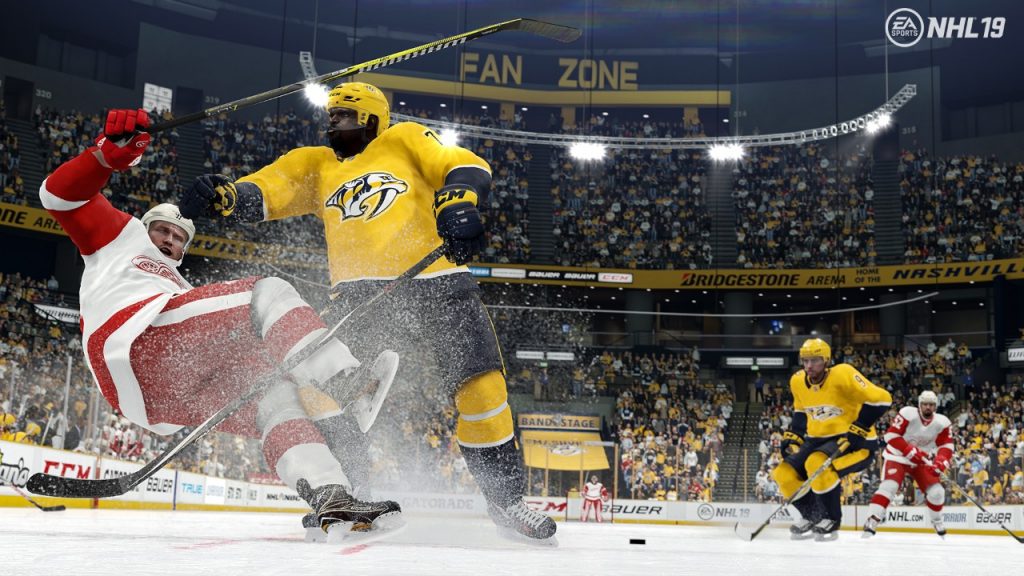 "As expected, sadly, there’s the obligatory microtransaction-filled mode with Hockey Ultimate Team. All the usual trappings are here that see players opening card packs to flesh out their dream teams."

Most surprisingly, however, is that I found myself thoroughly invested in Franchise mode, which is something that almost never happens for me in sports titles. It’s just as comprehensive as any other game and offers the typical recruitment, trades, and meetings. But a new “Fog of War” concept forces you to scout more often and be more aware so as to avoid having skaters’ ratings hidden from you. This unique spin makes the scouting system far more fun than it has any right to be.

As expected, sadly, there’s the obligatory microtransaction-filled mode with Hockey Ultimate Team. All the usual trappings are here that see players opening card packs to flesh out their dream teams. It’s a game of chances, and its predatory pricing system doles out points in such a way that you’re forced to spend more real money than packs actually cost, always leaving you with points left over. I’m not a fan of any microtransactions in full-priced games, but NHL 19 is one of the worst offenders when it’s taking advantage of players with such an unfair pricing model.

The game’s online experience is mixed. While World of Chel grants access to tons of exciting modes, the actual moment-to-moment gameplay can be somewhat iffy. I encountered a lot of slowdown and lag across the few hours I put into my online matchups. It was never a major issue that kept me from having a good time with other players, but it was also bad enough to create a few inopportune events that led to unnecessary penalties. I’m sure some of the problems can be ironed out over time, but if not, NHL 19 is poised to become known for some unfair online matches. 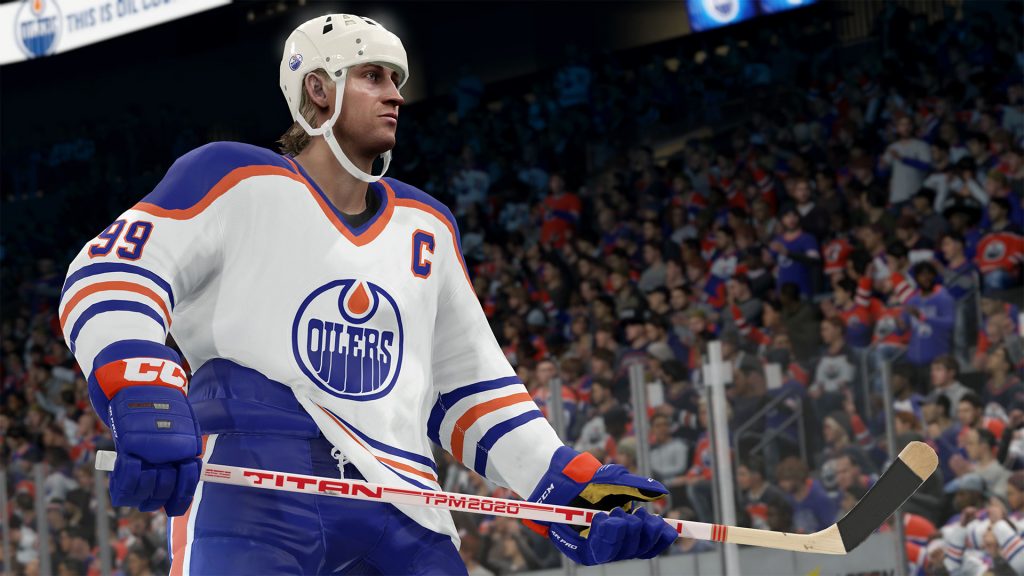 "Animations, on the other hand, are fluid and do a great job of visually representing the game’s tight controls."

Commentary is solid all-around, and the soundtrack is truly excellent. The game does a great job with its overall match presentation as well, but boy do wish EA would step up their visual game here. Little has changed since the last time I played a game in the series, meaning arenas are a delight, but players are still hideously modeled. The awful face capture work results in massive heads that look almost nothing like their real life counterparts. Most of them are so downright ugly that it actually becomes distracting, and I don’t even want to get started on how terribly this translates to the character creation.

Animations, on the other hand, are fluid and do a great job of visually representing the game’s tight controls. Skaters are highly responsive and the game’s aforementioned excellent difficulty options allow for a perfect amount of control based on an individual’s skill. I have a deep appreciation for the franchise’s nice balance between realism and arcade-y mechanics. It always leaves the physics and execution feeling ideal as you maneuver effortlessly around the rink. I never felt disadvantaged by the game’s fundamental control scheme, as it’s infinitely more accessible than other modern sports games.

At the end of the day, the level of polish from games like FIFA and Madden just isn’t here. Even so, there’s a significant amount of fun able to be pulled from specific modes like Threes and Franchise, but some visual elements, a dull career mode, and questionable menu designs really hamper the overall experience.

Final Verdict:
GOOD
EA has an impressive sports line-up, but this year's NHL entry clearly got a bit less love than some of the more universally adored sports.
A copy of this game was provided by Developer/Publisher/Distributor/PR Agency for review purposes. Click here to know more about our Reviews Policy.