This year’s iteration brings the new but won’t let go of the old.

The NHL series is the black sheep of EA’s sport mainstays, clearly falling behind in both sales and attention in comparison to the publisher’s most popular yearly titles like FIFA and Madden. Each year tends to bring a handful of improvements, like last year’s excellent addition of World of Chel, and yet there always seems to be so much overlooked in its core mechanics that leave it feeling slightly unpolished.

As expected, EA Vancouver has promised some much-needed additions in this year’s iteration, but the end result remains the usual mixed bag of fun new ways to play alongside a collection of continued oversights that prove that hockey just isn’t where EA is doing its best work.

I’ve always appreciated NHL’s mostly fluid controls and general accessibility, but perhaps the worst aspect of EA’s annual hockey franchise is that it rarely feels like it makes substantial changes where it’s needed most. This year, the addition of contextual shooting makes animations a lot more natural and assists you in shot selection, and you’ll notice goalies also share a considerably wider range of animations and actions.

But these basic quality of life fixes don’t change the fact that we’ve needed a true overhaul of AI for years. NHL 20 is filled to the brim with legacy issues like defenders making consistently stupid choices with positioning and players timing passes poorly for no good reason. On more than one occasion, my AI teammates would skate over to the puck and then decide it just wasn’t worth snagging, leaving it to the opposing team to come along for an easy possession. Problems like this have plagued the series for far longer than they should, and the workarounds EA keeps trying to employ just aren’t cutting it anymore. 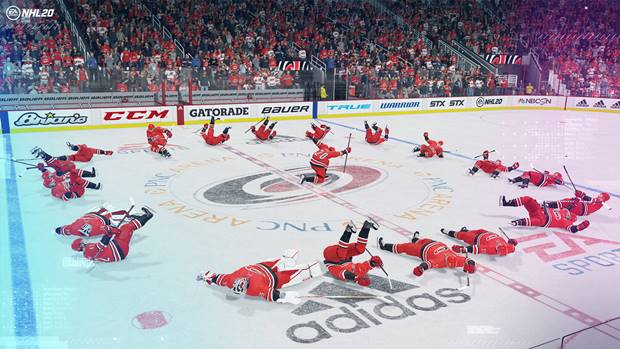 "Choosing your casual and professional wear is much deeper than I initially expected, going so far as to have you pick mouthguard materials and colors or decide how much of your jersey is tucked in."

On the plus side, the game’s broadcasting receives an overhaul this year, removing long-time commentator duo, Eddie Olzyck and Doc Emrick in favor of some new voices. Replacing them is Vancouver radio personality James Cyulski as the play-by-play announcer and Ray Ferraro moving from third commentator to color commentator.

Thanks to the fact that these two are local to EA’s Vancouver studio, we’ve been promised consistent updates to the commentary throughout the year. There’s good chemistry between them, and this year’s commentary tracks definitely feel a little less serious than usual. This is something EA has purposefully brought attention to as they aim to bring things in line with commentary styles from other popular sports for the sake of accessibility, and I’m all for it. Additionally, while I won’t spoil the guest commentators for you, rest assured there are a handful of fun ones that show up.

Creating a player is as easier and more fun than ever too, and choosing from a wide variety of preset faces and hairstyles is just the beginning – NHL 20 boasts an impressively layered style system.

Choosing your casual and professional wear is much deeper than I initially expected, going so far as to have you pick mouthguard materials and colors or decide how much of your jersey is tucked in. Intro animations and celebratory actions are often hilarious, and watching them play out in-game is a delight. Unlocking new clothing, accessories, and emotes gives you a solid secondary reason for keeping an eye on the game’s huge number of challenges. 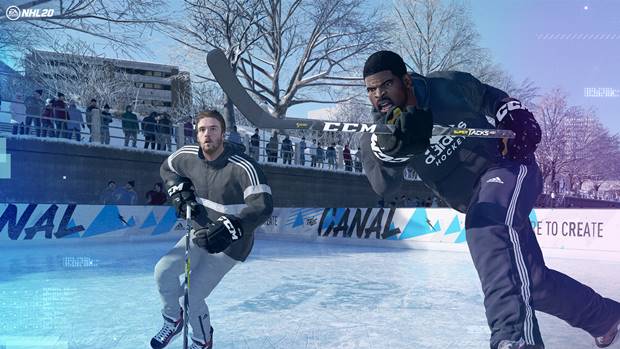 "Speaking of World of Chel, there’s a bevy of new challenges and content to unlock this year, but more exciting is what’s buried in its menus: an exciting new mode, Eliminator."

Trying to find which mode you’d like to dive into leads to suffering through NHL 20’s cluttered mess of a menu system. While I appreciate the sheer volume of content the game has available, there’s got to be a better way to present it to players.

Like last year, you can pin a handful of your favorite modes to your main menu, but if you’re a mode-hopper like me, you’ll have to navigate your way through the sea of boxes and sub-menus to get to the meat of the game. This is made even more tedious by the game’s long loading between menus, and I couldn’t ever quite pin down what could possibly be going on behind the scenes to require such extensive loading between such simple navigational pages.

This clutter showcases one reason that the franchise desperately needs to overhaul its modes in general. Sure, variety is nice, but there are now so many modes buried inside of other modes that a few of them have begun to feel redundant. For instance, Be A Pro continues to be one of the franchise’s weakest offerings, and at this point, it would seem more feasible to just merge it with the online-focused World of Chel.

The developers have obviously shifted the bulk of their attention to this newer mode, and it encompasses the best part of Be A Pro while expanding upon it exponentially in all the ways that matter most to the average player.

Speaking of World of Chel, there’s a bevy of new challenges and content to unlock this year, but more exciting is what’s buried in its menus: an exciting new mode, Eliminator. It takes a page from the popular battle royale genre and pits 81 players against each other in tournament brackets to see who reigns supreme. It’s playable solo or with a squad of three, and I had a good time competing in the solo version’s high-stakes showdowns against two other players at a time. Eliminator forces you to improve your skill in order to stand a chance to progress, and I can see it being the kind of mode that grabs long-time fans seeking new and interesting ways to showcase their proficiency. 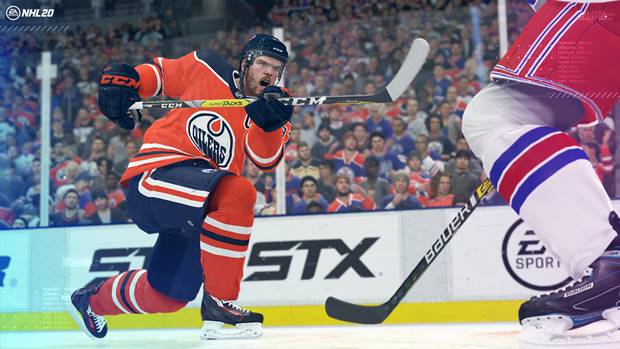 "I came down hard on last year’s severely overpriced microtransactions in Ultimate Team, and while I’m still not a fan of spending money to buy in-game content when I’ve already spent $60 on the game, I’m nevertheless happy to report that the prices have evened out some."

Ultimate Team’s new squad battles offer more to do for people who aren’t interested in engaging in NHL 20’s online fantasy mode, allowing them the option to play offline against HUT teams created by the community. Each week brings a new season and the ability to climb the ranks and earn cool rewards, and increasing the difficulty of your opponents’ teams also increases your earned points, giving you a meaningful reason to take chances.

I came down hard on last year’s severely overpriced microtransactions in Ultimate Team, and while I’m still not a fan of spending money to buy in-game content when I’ve already spent $60 on the game, I’m nevertheless happy to report that the prices have evened out some. With lower prices around the board, there’s more incentive to buy packs, which could potentially lead to more players for the mode and more variety among teams.

Final Verdict:
GOOD
NHL 20 brings enough new to the table that it feels like a worthwhile upgrade over last year’s entry, bringing the incredibly fun new Eliminator mode and revamped commentary that breathes some new life into the experience. Sadly, the AI remains occasionally nightmarish, and the game’s consistently-growing collection of modes means EA is leaving some older modes out to die, resulting in a lot of fluff to sort through to get to the good stuff.
A copy of this game was provided by Developer/Publisher/Distributor/PR Agency for review purposes. Click here to know more about our Reviews Policy.