NHL 21 takes some bold shots, but doesn’t quite connect with many of its goals.

As soon as you hit the ice with NHL 21, you’ll notice it’s rather nice presentation, smooth gameplay, and if you’re a player of past games, you’ll definitely notice a handful of tweaks here and there that chisel away at some of the gnawing issues from previous entries. Once you jump in, you’re greeted with a very succinct menu system that breaks up the game’s various modes in a very logical way. This was essential for the game to get down pat seeing as how there are so many ways to play NHL 21 and so many modes within it.

In fact, what makes things even easier for players who already know what they like best, there’s a top-level “pinned modes” menu that you can customize how you want so you can get straight to where you want to be and ignore everything you don’t generally want. Players of NHL 20 will instantly recognize the DNA of that game at nearly every turn with 21’s presentation and arrangement of its ideas, and that’s not a bad thing. With so many options, it would have been extremely easy for EA sports to mess this part up, but thankfully what wasn’t broken is largely being left alone here. Using the menus are a different story however, but we’ll get to that in a minute.

Sadly, the philosophy of leaving things alone is also in place for things that did need improvement. Most noticeably in the area of roster sharing, which is still frustratingly nonexistent. This is an issue that the NHL community has been vocal about for some time, as the franchise would obviously benefit from the ability to share custom, user-created draft classes and players like Madden does. Unfortunately, at least this time around, those requests from gamers seem to be continuing to fall on deaf ears at EA sports. You’d think with the amount of content that is crammed into this game, and with how faithfully the rosters themselves were updated, we’d be able to share our own around, but here we are.

"You’d think with the amount of content that is crammed into this game, and with how faithfully the rosters themselves were updated, we’d be able to share our own around, but here we are."

What has been added however is a new HUT and HUT Rush modes that are supposed to have lots of play modes within it, including 3v3, time and goal limits, and more. It seems that this is where EA is trying to put a lot of attention, but unfortunately for all of us, I could not for the life of me get these modes to work. All of them just hang on their opening screen. I checked to make sure the game was updated, my PS4 was updated, and even jumped into an online game of Need For Speed Heat just to make sure EA’s servers weren’t having some larger problem, but nope, it’s definitely this game. Which is a shame, as I could easily see these modes being preferable ways to play the game, so here’s hoping they get fixed soon. That aside, after only a few attempts I was able to get “World of Chel” Eliminator modes to work, and while they’re simple and tend to be complete barnburners, I can still see this as a fun series of diversions for folks who are fans of the modern NHL style of gameplay but might only have time for bite-sized portions of it.

Offline, NHL 21 fares much better. Newbies have a thorough training camp, hockey fanatics have the simulated Stanley Cup, returning fans looking to brush up have free skate, and of course, the main selection of modes in the core NHL experience cover just about every possible way you would ever want to play the game. The “Be A Pro” mode in particular is probably the brightest spot. It opens the game up into a real single player career-focused game that resembles what we’ve seen come out of Madden and NBA 2K recently. NHL 21’s updated Franchise Mode is also pretty neat as it more-or-less functions like a hockey team manager RPG where you scope out new talent, trade players, and manage your roster in a number of ways that you could easily sink just as much time into as you would in a Final Fantasy game.

Among the many updates to last year’s franchise mode is a generated prospect quality selector, additional positions for certain players, and better draft pick logic that makes CPU teams wait until they’re more experienced before actually getting their picks on the trade block. Also, and most importantly, no matter what mode you’re in offline, the hockey gameplay is fun. Scoring goals requires cunning to get around the goalies. Passing the puck around strategically and quickly can compartmentalize the defense nicely and clear yourself a path for a rush, although that may be a negative for those looking for a more realistic experience. It’s not quite NHL Hitz, but it is more arcadey than what some might want out of it. Turning up the general difficulty will help with that, though. 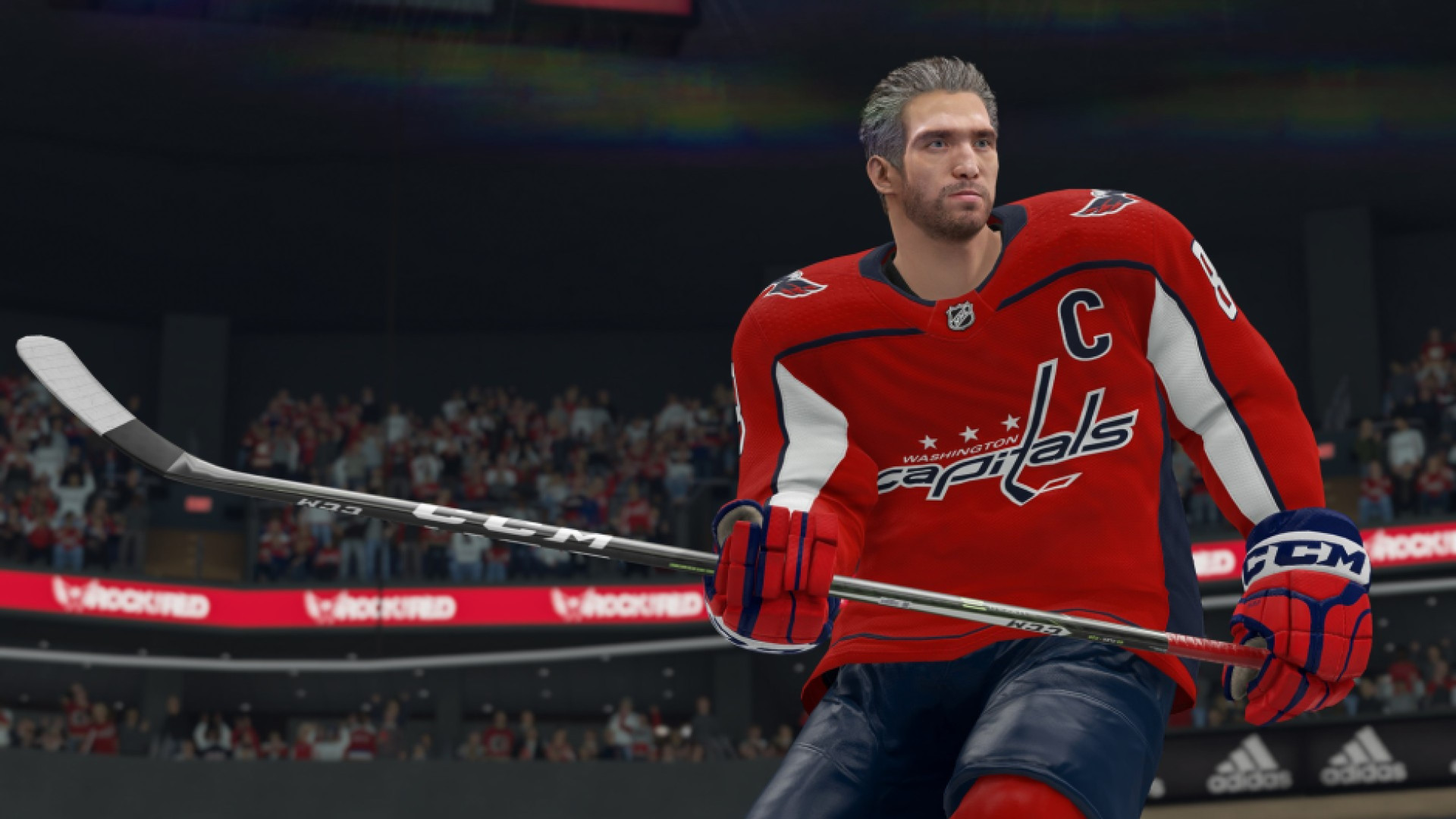 As far as technical performance of the game itself goes, on the whole, I wasn’t thrilled with it overall. The core gameplay of moment-to-moment action generally works well, and perhaps even better than NHL 20 in some ways with great goaltender AI and a tough-but-fair level of difficulty throughout, but moving around in the menus themselves, especially online, can be a chore with laggy transitions, certain panes hanging on top of other ones long after they should be gone, button presses taking so long to register than you end up doing it again because you think it didn’t register at all, and then the game takes you somewhere else entirely and you have to back up to reorient yourself. At one point I even had the screen go dark and stop registering my inputs entirely in the middle of an online match for no reason, which of course ruined it for all involved.

That, on top of most of the online modes just not working at all, adds up to a fairly annoying experience a lot of the time when you’re outside one of the modes trying to get the game to be a game. This is of course made even more of a head-scratcher given how much of modern sports games like this are built upon previous ones. You’d think that would lead to a smoother gameplay experience, if anything. It’s a good thing that the core gameplay of NHL 21, and the wealth of ways to do it, as good as it is. Without that, there wouldn’t be a whole lot here to save it.

As mentioned, during offline gameplay inside any of its many modes, there’s a lot to enjoy. The announcers are fun and convincing. I didn’t start recognizing phrases until well after I completed several games. The broadcasters even interrupted themselves to announce a score or impressive save quite often. All-in-all, it really seems like they went out of their way to polish up the commentary here, and that goes a long way to making it feel like I’m just watching a great hockey game. 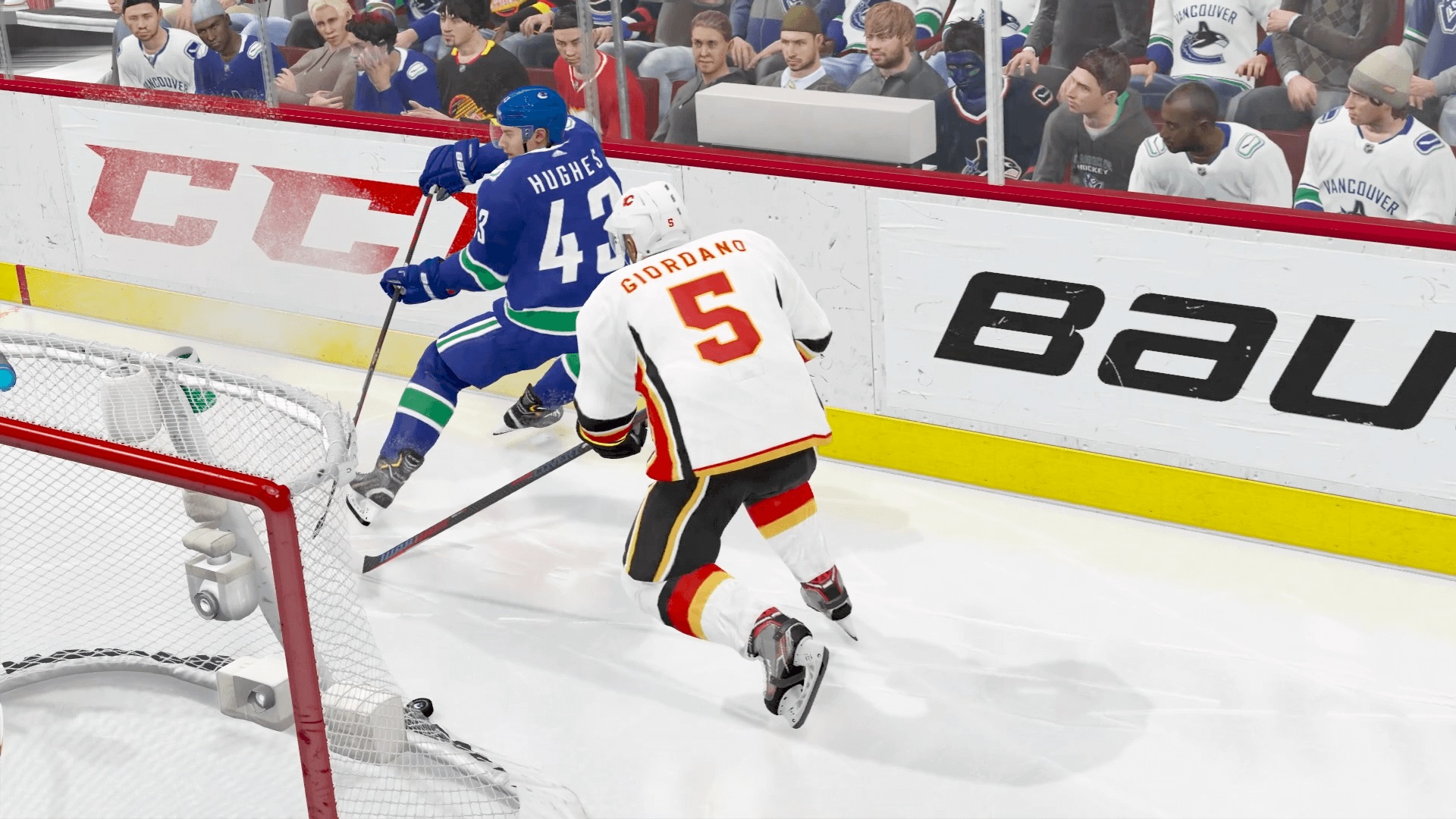 "It’s a good thing that the core gameplay of NHL 21, and the wealth of ways to do it, as good as it is. Without that, there wouldn’t be a whole lot here to save it."

Similarly, motion capture for the players is also really good and convincing and it’s nice to see the wide variety of high-quality animations for different moments of celebration, frustration, and everything in between. That said, the illusion does fall apart a little bit sometimes when you’ll notice two or three people doing the exact same animation in perfect sync with each other, and when the camera comes in close to the facial scans of the players, which are serviceable but clearly have not seen much of an upgrade in terms of detail.

NHL 21 certainly doesn’t reinvent the genre in any major way, but that’s largely because it doesn’t have to. The NHL games are largely okay at their core and when they’re working as intended. NHL 21’s biggest problem is not what it’s missing, it’s how ineptly it brings it’s pieces together despite having a reliable blueprint and plenty of fan feedback to go by. I would have gladly accepted an NHL game with half of the content of this one, if everything just worked better. But as it stands, NHL 21 is a feature heavy game that is surprisingly light on polish and bit too tone-deaf when it comes to what its fans actually want from it. I appreciate the shots that NHL takes at improving the formula, but at the end of the day, most of those shots are too little too late, and end up making the overall experience just barely better than mediocre.

Makes some effort in areas where it was needed and maintains much of what the series has gotten right so far.

Online is generally a mess, and most are too little, too late to justify the price tag.

Final Verdict:
GOOD
I appreciate the shots that NHL 21 takes at improving the formula, but at the end of the day, most of those shots are too little too late, and end up making the overall experience just barely better than mediocre.
A copy of this game was provided by Developer/Publisher/Distributor/PR Agency for review purposes. Click here to know more about our Reviews Policy.