This year’s NHL is the best version for newcomers in years.

NHL is the pariah of the EA Sports family; incredibly popular with its long-standing audience, but overwhelmingly niche compared to EA’s monolithic sports titles’ FIFA and Madden. As a result, NHL games have a habit of feeling underbaked, a few icy shards away from greatness.

The series sits on the backburner with EA too, with NHL being the last of its marquee sports titles to adopt the Frostbite game engine, a platform which offers greater lighting and visual effects. Frostbite first came to last year’s title, NHL 22; with this being a year later, there’s an expectation NHL 23 will better harness the technological capabilities afforded by the more powerful game engine. So, does it? Well… mostly yes, it does.

See, most touted of NHL 23’s innovations are improvements to player animations. In fact, EA Vancouver reckons there’re more than 500 new animations, including last chance puck movements, that is, desperation animations, stumbling actions, and loose puck plays for both last ditch passing and scoring. Goalie AI is said to be enhanced with more than 350 new save animations too, anything from snatching a puck mid-flight with finesse to frantically lying backwards in the hopes of trapping a puck slidden out of sight between ice and body.

There’re also upgrades to X-Factor abilities. Most headline-grabbing is Trevor Zegras of the Anaheim Ducks’ lacrosse style “skilled up” flip pass over the net animation and Sarah Nurse’s “relentless” ability, rendering her capable of threading accurate passes and shots even when off balance. AI X-Factor players are said to be capable of better utilising their X-Factors during gameplay as well. According to EA Vancouver, these individual moments are designed to deliver a greater feeling of authenticity, a more rounded, realistic style of play. Thing is that these moments are so short-lived if you blink, you’ll miss them. Whilst for sure a lot of development work has gone into the sheer wealth of fresh skater animations, they only represent an incremental change over last year’s title as their occurrence is so infrequent.

Most noticeable of the updates though, and where EA Vancouver have certainly succeeded, is in NHL 23’s redesigned crowd behaviour and engagement. As anyone who’s attended an ice hockey game will testify, the atmosphere is oftentimes electric. NHL 23’s updated chants, goal reactions, and newly animated hat-trick celebrations – whereby the crowd riotously throw their hats into the rink – replicates the euphoric feeling of being at the game exceptionally well; the crowd following the on-ice action closer than ever represents a big improvement on past NHL games.

Crowd engagement is tied into pre-match and post-goal arena lightshows too, with Toronto’s Scotiabank Arena, for instance, offering an icy-cool blue neon lightshow before the puck drops on a Maple Leafs game night. Again, it must be said these moments are fleeting, for any pre-match lightshow only lasts five-or-so seconds. NHL 23’s presentation provokes a potential adrenaline rush, but as with the headline-grabbing X-Factor abilities and barrage of new skater animations, they don’t have a direct effect on gameplay. They’re cool, for sure, and certainly imaginative, so it’s a shame they’re not massively noticeable. The pre-match lightshows don’t appear at every arena either. And that, in itself, speaks to the root of the issue with NHL 23, and that is, aside from changes to AI and animations, there isn’t a whole lot else new.

Sure, gameplay-wise, again NHL 23 embraces subtle difference. Players feel slightly heavier compared to previous iterations and puck physics feel a little tighter. This isn’t purely an effort towards authenticity and realism as per the slew of animations, but it affords players more control over proceedings. It’s perhaps telling that there’s also an onslaught of visual on-ice tutorials during play; when activated, players are treated to anything from dotted lines indicating available passes, colour-coded targets in nets, or entire portions of ice highlighted in red to indicate offside players, there’re plenty of visual clues to help players fresh to the ice. 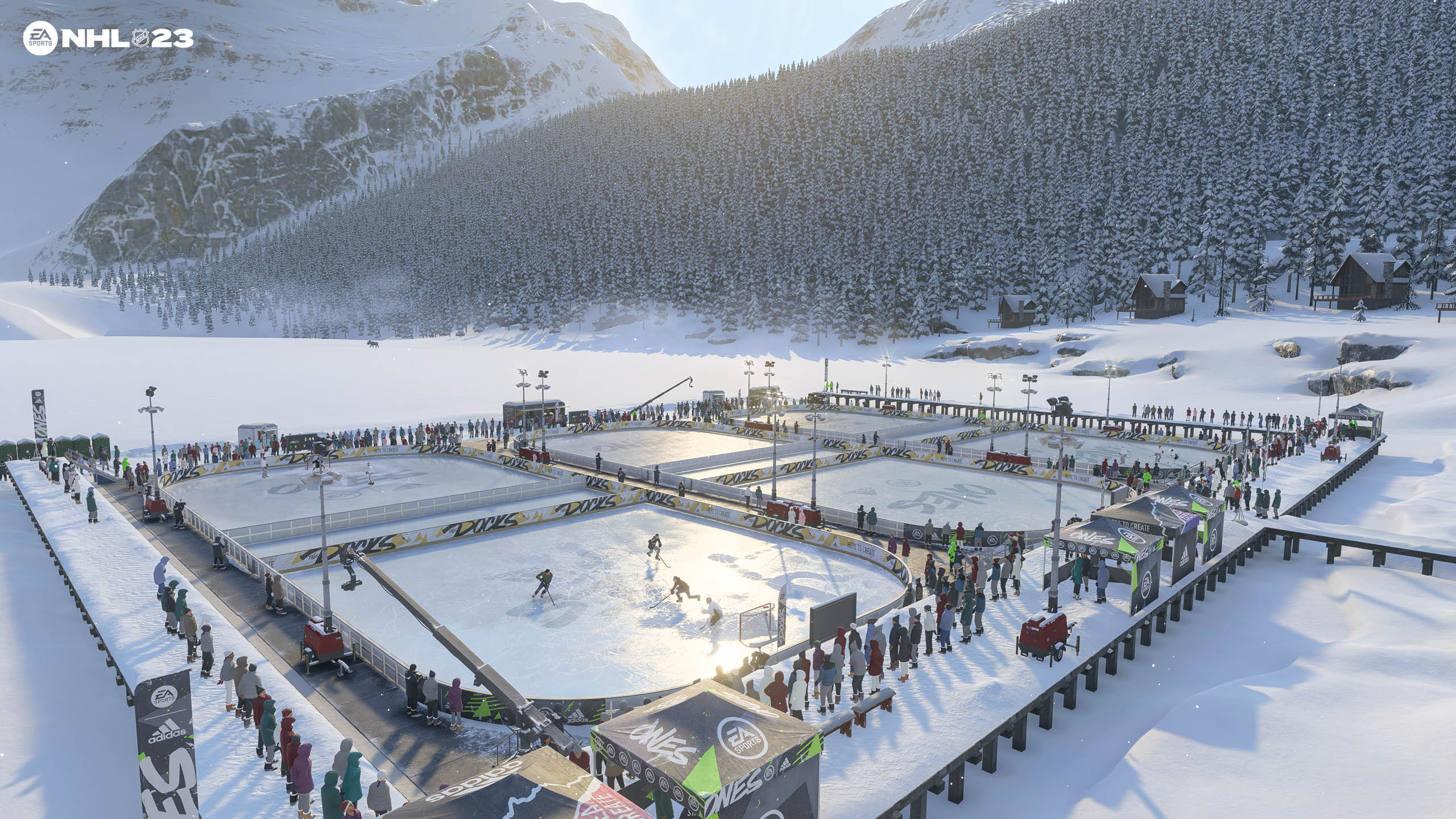 "Most noticeable of the updates, and where EA Vancouver have certainly succeeded, is in NHL 23’s redesigned crowd behaviour and engagement. As anyone who’s attended an ice hockey game will testify, the atmosphere is oftentimes electric."

On-ice tutorials surely provide a decent service to rusty players too as they’re immediately intuitive and rarely distracting. Coupled with on-ice stats – percentage of faceoffs won, number of hits, shots on goal, passing accuracy – it feels like NHL 23 is catering to the novice player. If all this visual pizazz is distracting to seasoned players they can be turned off, of course, but as it stands, is this indicative that the most fun to be had with NHL 23 is for newcomers? If a player already owns NHL 22, are the immersive qualities afforded in a wide variety of animations and on-ice stats worth the asking price?

To answer these questions, we can look at NHL 23’s various game modes, but alas, there are no new gameplay modes to shake a stick at. Be a Pro returns, itself a carbon copy of 22’s Be a Pro mode (with NHL 22 being a direct descendent of the mode first introduced in NHL 21), and whilst it’ll always be fun to create your own avatar and rise to the first line of your favourite team, a refreshed script, at the very least, would have been nice. The perennially popular Ones and Threes game modes reappear too, but the biggest changes come to NHL 23’s franchise mode and its daunting amount of customisation options, which EA Vancouver tout as reaching “historic levels.”

There’s newfound ability to craft a league with any number of teams between 6 and 48, there’re salary caps, deeper coaching strategies, with revamped regular season and playoff game formats. It’s a veritable smorgasbord for anyone who’s a fan of franchise mode; 23 offers undoubtably the most control of any NHL game thus far. Plus, it’s now easier than ever to create custom leagues that replicate iconic eras of hockey’s heritage, including the historic original six or the halcyon days of 1980s ice hockey.

Online play revels in minor revamps too; World of Chel’s player-versus-CPU and online head-to-head challenges offers similar arcade experiences as its predecessors, but with refinements in defensive gameplay it’s less likely to leave players frustrated by opponents spamming the right trigger to snatch the puck. Cross-play is a big feature touted for this year’s edition, and whilst it isn’t available at launch, perhaps more disappointingly it appears it’ll be watered-down when it does arrive next month. NHL 23’s cross-play won’t be cross-generation, so players on PS4, for instance, won’t be able to play with their mates on PS5. 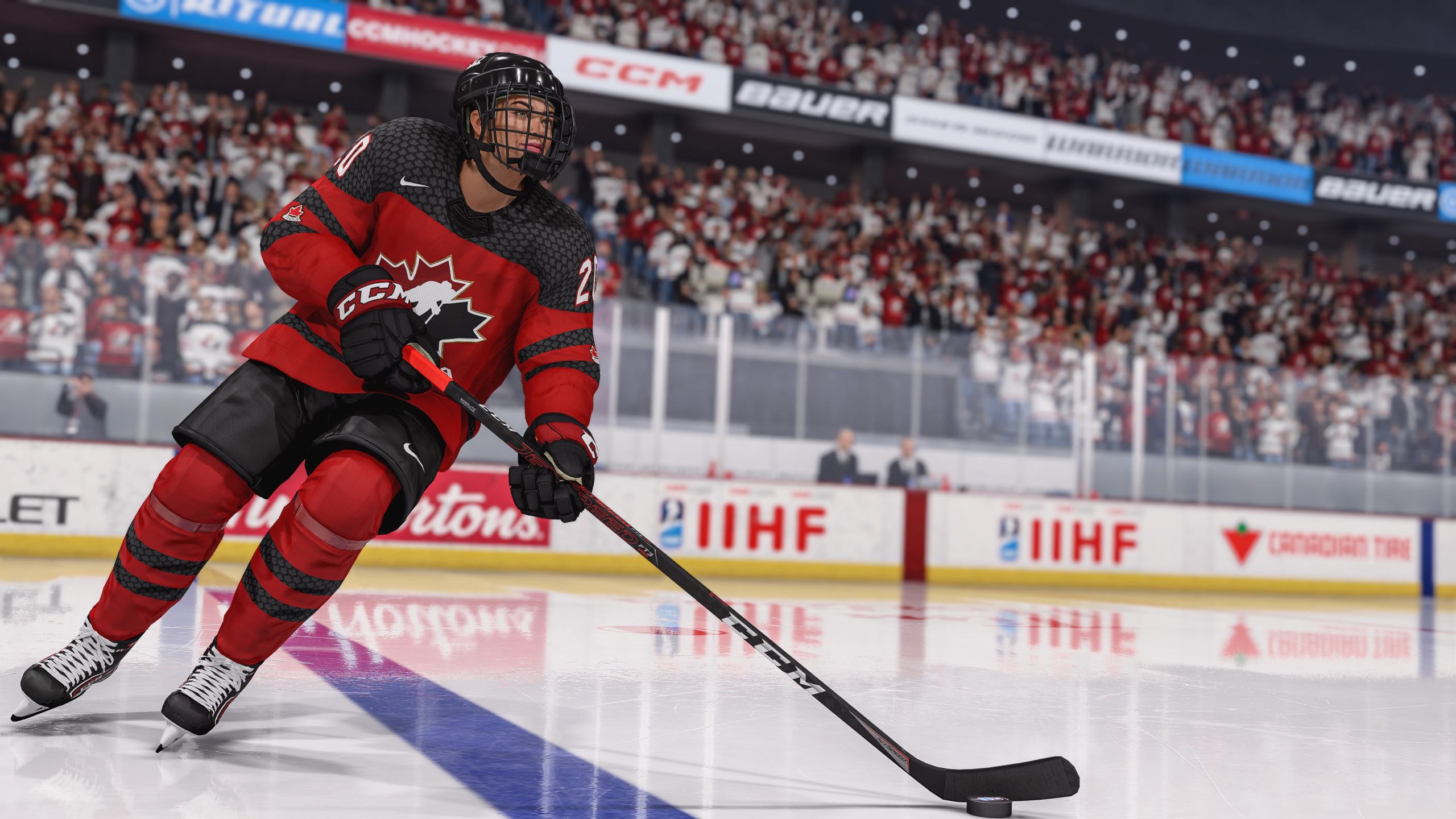 "NHL 23 feels best suited to series newcomers. It’s a solid release, with a wealth of fresh animations and finetuned AI delivering a more authentic experience but it’s likely to feel like DLC rather than a new game to players of last year’s edition."

Hockey Ultimate Team’s major revamp is the very welcome fact IIHF Women’s National Team players can be selected to play alongside men in an Ultimate Team mixed line up. This is a historic first, and hopefully the first step of many in the right direction. Still, it doesn’t feel like EA Vancouver have done quite enough to cater for female players in NHL 23. Perhaps, owing to some of the unaltered gameplay modes returning from last year’s edition, there’d have been room to squeeze in a female-orientated storyline.

Elsewhere, Hockey Ultimate Team comes laden with microtransactions once again. Whether that’s a plus or minus for this year’s edition depends on the player; EA Vancouver have promised to make it easier to earn experience and in-game currency via faster weekly rewards and additional reward tiers. In reality though, real-life money will undoubtably be spent to create the strongest line up.

Ultimately, NHL 23 feels best suited to series newcomers. It’s a solid release, with a wealth of fresh animations and finetuned AI delivering a more authentic experience but it’s likely to feel like DLC rather than a new game to players of last year’s edition.

Final Verdict:
GOOD
New animations help NHL 23 make steps toward greater authenticity but the series still needs a major overhaul.
A copy of this game was provided by Developer/Publisher/Distributor/PR Agency for review purposes. Click here to know more about our Reviews Policy.