Namco Bandai have today announced a collector’s edition of Ni No Kuni: Wratch of the White Witch entitled the Wizard’s Edition.

Releasing alongside the standard version of the game in Europe, Asia and Australasia, Ni No Kuni is an epic tale of a boy on a quest to save his mother, developed by the highly esteemed LEVEL-5 studio in conjunction with the mesmerising Studio Ghibli.

The Wizard’s Edition will contain hardback copy of The Wizard’s Companion, a 300+ page version of the spellbook Oliver uses throughout the game; a full-colour Wizard’s Companion detailing all of the creatures, items, spells and history of the ‘other’ world. The very limited edition will also contain an exclusive plush doll of Oliver’s guide, Drippy, as well as some exclusive in-game DLC. Pre-ordering at select retailers will also unlock two more familiars, Flutterby and Griffy. 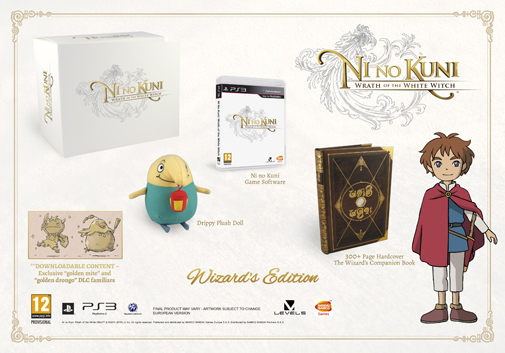 Ni No Kuni: Wrath of the White Witch and the Wizard’s Edition is coming exclusively to the Playstation 3 on 25 January 2013.