A decent polishing act isn't quite enough to buff out the critical design flaws of Ninja Gaiden 3.

Ninja Gaiden is a game series with a very long and winding history. As one of the hardest titles to grace the NES, the series’ eventual hiatus coincided conveniently with when difficulty in games started taking a down-turn. It was thus in 2004 that the Ninja Gaiden reboot kicked our collective asses. It was brutal, but oddly refreshing to have a game that really put our skills to the test. A few games (along with plenty of re-releases) later and we had Ninja Gaiden 3, a total turn away from everything the original games stood for. The Razor’s Edge remake on Wii U fixes plenty of the issues present in the original, but it still fails to totally recover the game from its frustrating design failures.

The plot (not exactly the best place to start with a Ninja Gaiden game) isn’t much to speak of, and the bizarre decision to focus on the in depth characterisation of series protagonist Ryu Huyabusa was one of the big things that crippled NG3 the first time around. This bizarre focus has been ended, with the spotlight re-shifting to the action; where it really should have been all this time. 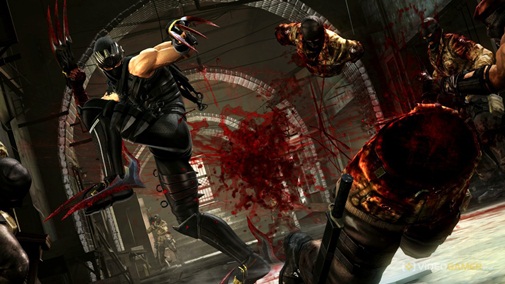 It’s a good thing the action is front and centre once again, as it is pretty decent. The wheel hasn’t been reinvented here, with the standard combination of light and heavy attacks requiring a mix up in order to chain together the increasingly outrageous combos the series is known for. Things aren’t 100% in the realm of combat though. A lot of effort has clearly gone into improving the combat in the original NG3, and the biggest and most welcome change comes in the form of the difficulty. The loss of series director Tomonobu Itagaki clearly had an impact on vanilla NG3, as the famous difficulty of the series was dropped in favour of a more accessible formula. Spoiler alert, it didn’t work. It left the series in a confused state that Razor’s edge manages to vaguely rectify through a much sharper learning curve.

Make no doubt that this version of Ninja Gaiden 3 is every bit as challenging as its predecessors, but it still doesn’t quite feel right. The mandatory tough first boss is present, as are swarms of enemies with surprisingly deft combat abilities, but there’s still plenty of cheap shots going on. For every decent challenge with a rewarding aftermath is another guy with a rocket launcher that breaks your combo flow yet again.

Other signs remain of Ninja Gaiden 3’s previous failings. The big issue is how the game doesn’t feel especially well optimised for this new difficulty. The cinematic kill cams break up any sense of combat flow and often distract more than help, the ninja sense camera does a similar job of obscuring your view and the controls just don’t feel as tight as they did in the previous two Ninja Gaiden games. Part of this is also to do with using the Gamepad as a primary controller. The touch screen elements are superfluous at best, merely allowing you to activate your ninpo, engage ninja sense and manage your skills. Ignoring these though, the actual buttons themselves feel too wide, too far apart to be comfortable in a game that requires such an extreme level of gaming prowess and dexterity. 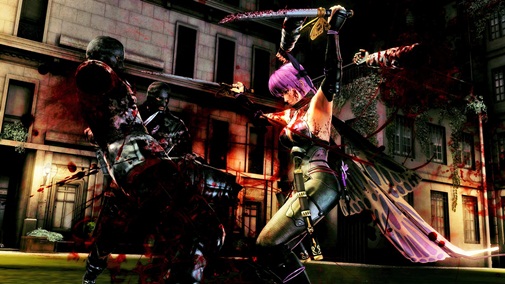 Things get a lot more comfortable if you are able to get your hands on a pro controller, as it’s more conventional form factor feels far better suited to such a demanding game. Once you do, Ninja Gaiden 3 improves drastically, to the point where the minor flaws of the combat are able to be overlooked. That said, the combat itself eventually becomes a flaw, if only because there is just so darn much of it. Razor’s Edge certainly packs in a lot of content, what with the inclusion of extra missions and the option to play these as Dead or Alive heroine Ayane and Momiji from Ninja Gaiden DS. The problem is how samey it all becomes. There are enough combos and weapons to provide reasonable depth, but the average player will find the combat alone still gets stale fast. Too many enemy types are repeated, and the sparse peppering of alternate gameplay elements isn’t enough to keep things fresh.

The multiplayer is one area that spices up the tiring formula. It’s definitely a hit and miss affair, but the persistent skill system adds a nice sense of progression and, though the co-op missions suffer this game-wide issue of repetition, the player versus player modes are a refreshing change of pace for the series. The servers aren’t exactly booming, and the questionable levels of latency often turn one on one battles into an awkward and unsatisfying affair, but kudos goes out to Team Ninja for attempting to adapt the NG formula in this way. 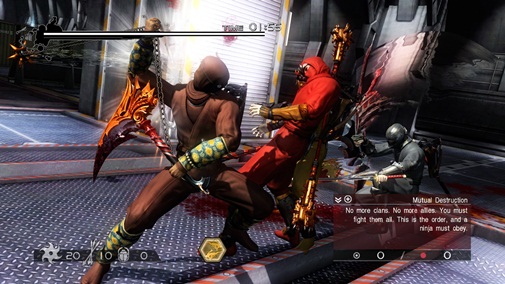 At least the game offers some pretty sights, with polished visuals throughout. There’s an issue with the frame rate here and there, but the graphics are technically impressive regardless. The stylish action certainly sits well with these shiny animations, but the textures are pretty poor. Levels just have a very drab visual design in comparison to previous NG games, with a wash of browns and greens failing to impress on an artistic level.

Ninja Gaiden 3: Razor’s edge isn’t exactly a bad game, but it constantly feels like an attempt to pave over the cracks of an already broken product. It manages to recover NG3 with a similar flare that Team Ninja have always been known for, but the weaknesses of the original game are not so easily erased, preventing Razor’s Edge from ever hitting the heights of the earlier games. Rubbing salt into this wound is the fact that the game also fails to utilise any of the Wii U’s more interesting capabilities, making this a pedestrian port of an equally pedestrian Ninja Gaiden game.

Final Verdict:
FAIR
The director's cut of the ill-received Ninja Gaiden 3 fixes plenty of the original game's issues, but it still remains a somewhat uncomfortable adventure that fails to match its pedigree
A copy of this game was provided by Developer/Publisher/Distributor/PR Agency for review purposes. Click here to know more about our Reviews Policy.