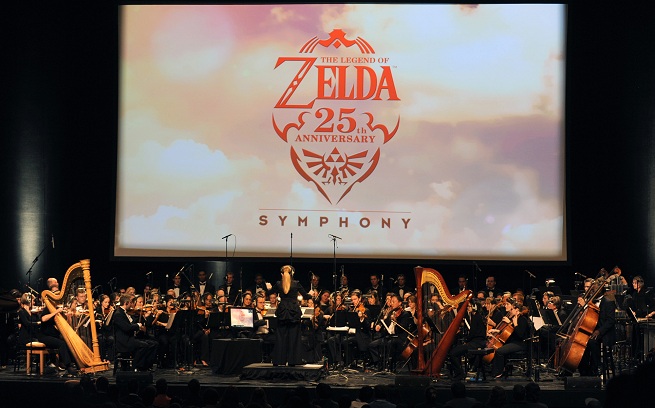 On Jan. 10, the Dallas Symphony Orchestra will kick of the Tour by performing orchestral musical arrangements of music from The Legend of Zelda franchise. The game is celebrating its 25th Anniversary and the concert with have video content from the games playing along side the orchestra. The tour will go across the United States in 2012 as The Legend of Zelda: Symphony of the Goddesses.

Tickets are now available for the Dallas performance at Ticketmaster as well as performances closer to where you live ranging in price from $19 to $115. Through Nov. 30, tickets are available to Club Nintendo members at a 15 percent discount. The concert will retell key moments in the game 25 year stretch in order through the music as well as the video.  Official press release below.

REDMOND, Wash.–(BUSINESS WIRE)–Video game fans in the Lone Star State will soon be able to experience Nintendo’s musical tribute to The Legend of Zelda™ video game series. On Jan. 10, the Dallas Symphony Orchestra will perform orchestral arrangements of music from the game’s 25-year history accompanied by video content from the games themselves. This new concert series will go on tour across the United States in 2012 as The Legend of Zelda: Symphony of the Goddesses. Tickets for the Dallas performance are now available direct from the Dallas Symphony and range in price from $19 to $115. Through Nov. 30, tickets are available to Club Nintendo™ members at a 15 percent discount.

Nintendo has teamed up with Jason Michael Paul Productions, Inc. to provide video game fans with the ultimate musical experience for The Legend of Zelda. The highlight of this new musical program is a full four-movement symphony that will guide fans through a musical retelling of key chapters from The Legend of Zelda franchise. The Legend of Zelda: Symphony of the Goddesses concerts will be conducted by Irish-born conductor Eimear Noone, and the multimedia show will pair iconic music and gorgeous visuals from classic Zelda titles, including the newest game in the series, The Legend of Zelda: Skyward Sword for the Wii™ console.

“The love that fans feel for The Legend of Zelda series cannot be overstated,” said Scott Moffitt, Nintendo of America’s executive vice president of Sales & Marketing. “In 2012, we want to give people across the country a chance to come together and enjoy the music from the games that mean so much to so many.”

“The Legend of Zelda is as close to our hearts as it is for the fans,” said Jeron Moore, producer for Jason Michael Paul Productions, Inc. “The tour will be something both fans of the franchise and music enthusiasts alike won’t want to miss.”

About Nintendo: The worldwide pioneer in the creation of interactive entertainment, Nintendo Co., Ltd., of Kyoto, Japan, manufactures and markets hardware and software for its Wii™ home console, Nintendo 3DS™ and Nintendo DS™ family of portable systems. Since 1983, when it launched the Nintendo Entertainment System™, Nintendo has sold more than 3.8 billion video games and more than 610 million hardware units globally, including the current-generation Wii, Nintendo 3DS, Nintendo DS, Nintendo DSi™ and Nintendo DSi XL™, as well as the Game Boy™, Game Boy Advance, Super NES™, Nintendo 64™ and Nintendo GameCube™ systems. It has also created industry icons that have become well-known, household names such as Mario™, Donkey Kong™, Metroid™, Zelda™ and Pokémon™. A wholly owned subsidiary, Nintendo of America Inc., based in Redmond, Wash., serves as headquarters for Nintendo’s operations in the Western Hemisphere. For more information about Nintendo, please visit the company’s website at http://www.nintendo.com.