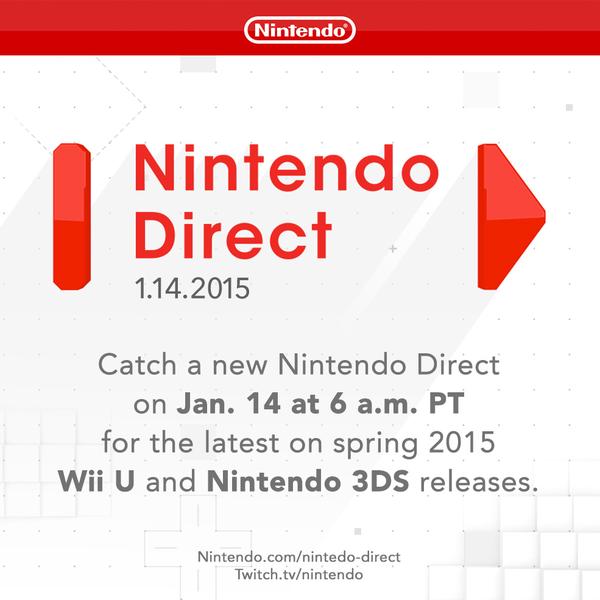 Everyone was expecting one, but it’s nice to see it finally confirmed- Nintendo has confirmed an all new major Nintendo Direct scheduled for tomorrow at 9am Eastern Time. This new Nintendo Direct will be a worldwide event, and while it ostensibly purports to cover only upcoming spring games for the 3DS and Wii U, we all know Nintendo never sticks to the agenda in these anyway.

Even without expecting any major surprises, there’s a lot for Nintendo to cover- the elephant in the room is the launch of the New Nintendo 3DS in the west, which I am sure will be covered here. That apart, we need more details on games such as Kirby and the Rainbow Curse, Splatoon, Monster Hunter 4 Ultimate, Project STEAM, and of course, The Legend of Zelda: Majora’s Mask 3D. And all of this doesn’t consider the fact that Nintendo’s January Directs are usually major events, and have previously in the past led to major game announcements such as Xenoblade Chronicles X, The Legend of Zelda: The Wind Waker HD, Pokemon X and Y, and Hyrule Warriors, meaning they might just have some surprises up their sleeve.

Just what are these surprises? We don’t know, but we’ll keep you posted for sure. Tune in to GamingBolt tomorrow, as we’ll have all the latest and greatest for you then.