Nintendo Switch Launch Lineup Might Have Been Leaked, Unannounced Games Make An Appearance

A new screengrab from what is purported to be the Nintendo Switch launch lineup briefly made the rounds on Twitter on Monday, before the picture was quickly deleted. As this is the Internet, deleting the photo didn’t solve the problem and now there’s lots of talk about what a few games we knew were coming and a couple that were rumors only.

GameTransfers posted the image below, showing games like Legend of Zelda: Breath of the Wild and Skyrim Special Edition launching on March 17. That is the launch date for Nintendo’s new console, so these are purported to be launch titles.

What’s really interesting is that another game called Splatoon Counterattack is also going to be landing on March 17. Considering we’ve never heard of this game, it’s interesting it might be launching in just two months. Another game, titled Assassin’s Creed Egypt is said to be launching on March 24 according to this pic. Nintendo is obviously not talking yet about this “leak” but if it’s for real, we should find out quickly. 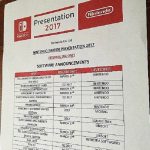