The action RPG sequel seems to be enjoyed by most in its current state, but tweaks are coming.

Nioh 2 is one of the many, many games that are planned for March of next year (and one of three Japanese RPGs that month). The game got to show itself off with an extended beta demo earlier in the year. Part of that beta was a survey to gauge how people were feeling about the game, and it seems that, by and large, the experience was positive for most.

Koei Tecmo and Team Ninja announced the result of the surveys, which you can read the full breakdown of there as well as see the chart and notes below. It seems the player base of the beta was strongly positive in most categories. The weakest was UI and Tutorial, which both scored 13% negative. The most positive rated thing was the music and effects that only saw a 3% negative rating.

Though the rating was mostly positive, the developer did promise some adjustments. The balance of difficulty, tweaks to the Dark Realm and refinements to level design are on the list of things to improve. The original Nioh also went through a similar feedback process after its initial alpha and beta tests. We’ll see what kind of changes will come to the sequel when it launches on PlayStation 4 next March. 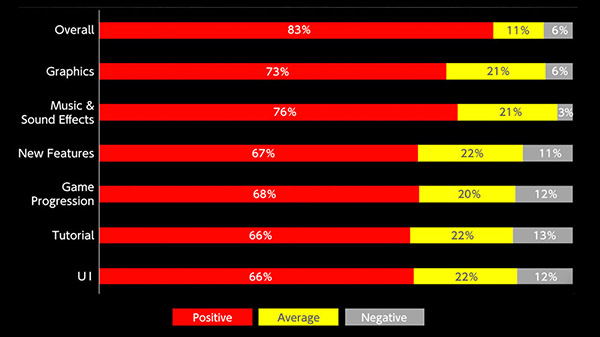