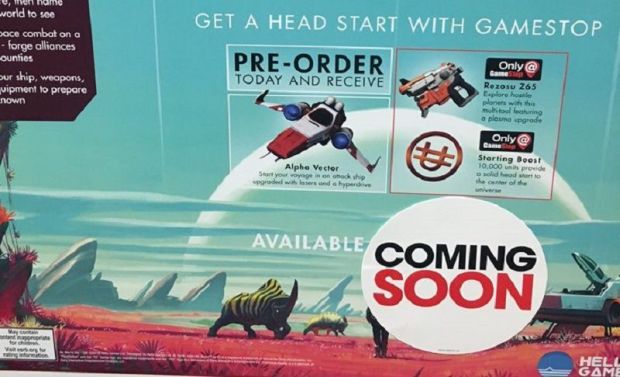 Hello Games’ No Man’s Sky has allegedly suffered a delay. Two sources spoke to Kotaku and revealed that it could out in either July or August. At this point, it seems the new release date hasn’t been finalized yet, if the delay is actually true.

The first source is described as “reliable” while the second source comes from GameStop which received marketing materials for the game with original June 21st release date but was then informed that said date was incorrect and to cover up the same with a “Coming Soon” label. The image can be seen above.

No Man’s Sky was first revealed at VGX 2013 and has seen quite the long development cycle over the years. It was poised to release on PC and PS4 next month, which wouldn’t have been the worst time given a relative lack of big-name releases compared to other months.

Regardless, July and August will be fairly open as well so those aren’t terrible alternatives. As always, take these reports with a grain of salt and stay tuned for more information.