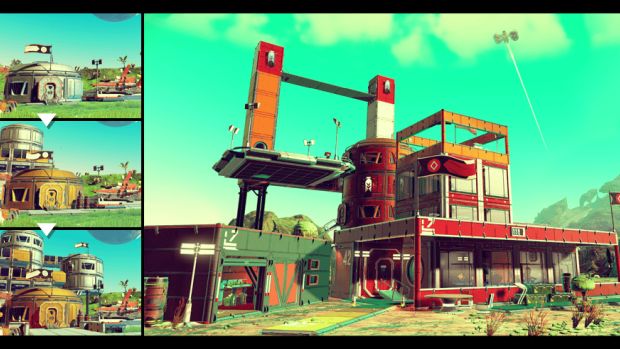 Hello Games’ No Man’s Sky has been the recipient of much criticism over the past few months but the developer has been hard at work on improvements. Many of those are coming in patch 1.1 aka the Foundation Update which will introduce base-building and serves as a “foundation” for future things. Check out a new video for the patch below.

The patch will add three new modes – Normal Mode, Creative Mode for exploring without limits and building a large base and Survival Mode, which makes the game much more challenging. The base-building feature will allow you to create an outpost of sorts where you can recruit aliens to research new tech and farm resources. Teleporters can be used to travel between space stations and your base.

Those annoyed with storage restrictions will containers at their base for stockpiling resources. Freighters can also be purchased for transferring resources. There will also be revamps in the UI, new graphical features like TAA and motion blur (the latter which can be turned on and off).

Patch 1.1 hasn’t been dated yet but you can learn more about what it contains here. What are your thoughts on the Foundation Update and will it revitalize interest in No Man’s Sky? Let us knwo in the comments.