Don't look for rationality or intelligence, accept the uncanny and enjoy.

Octodad tells the bizarre and non-sensible tale of an Octopus living his life as a man. It’s pure comedy from start to end and despite yourself questioning your own skills of the game, just remember one thing, there’s always someone else out there, and they’re sucking just as hard as you. That’s the point of the game, the control methods are not here for you or anybody else to master. They’re deliberately broken just so you can make an ass of yourself waking down the aisle of your Wedding day, which is where our story begins.

Opening up with a tutorial level in the groom’s changing room, the groom being you, you are tasked with familiarizing yourself with the controls, through the obscure tutorial of getting dressed, that’s right the Octopus wears clothes, don’t question it. Having to switch back and fourth between your arms and legs with the press of a button, you’re left thinking would this have been easier controlling all limbs at once, or would I have been in more pain than I bargained for. This is by design, the controls are set-up in such a way just so karma can you kick in the teeth as you laugh at your own tomfoolery. 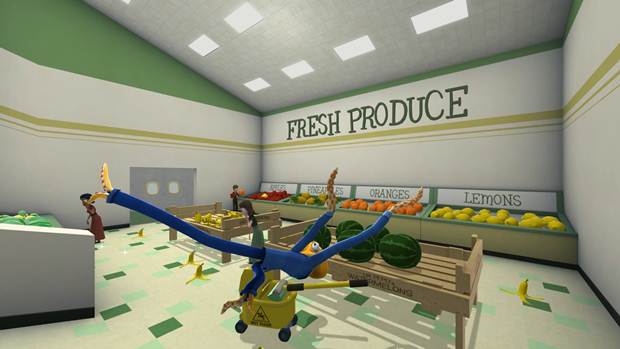 "One thing that's so well thought out about this game is in its effortless approach to level design. Although be it very simple each level is set-up in a way that's totally designed to screw you over and challenge the unchallengeable."

After finally overcoming the conveniently laid out statues, ornaments, and furniture in your way, you realize something very crucial to the nature of the game. Under the rules that we immerse ourselves into the game’s obscene reality, we as so-called “Intelligent Beings” are living in serious denial if we fail to notice a sea-life creature masquerading as a man. I don’t know maybe it’s the Tenta-Beard that allows him to conceal his disguise so well.

One thing that’s so well thought out about this game is in its effortless approach to level design. Although be it very simple each level is set-up in a way that’s totally designed to screw you over and challenge the unchallengeable. As I stated previously the controls are purposely broken, and you throw that into the mix with the game’s environment of every object containing physical properties, then your in for one hell of a ride. The controls can feel like a mixed bag at times, you know they’re here to drive you crazy but at the same time they’re meant to make you laugh. It’s a pleasurable pain where physics and dead zones are turned on their heads. With that being said it’s best the game is played with a controller although a mouse and keyboard is optional, you’ll feel more in control whatever that means. Do or do not you will TRY and FAIL.

As the controls play a such a large role in how you play the game, you’re most likely asking yourself how does the story stack up? Well, surprisingly well. Yes Humans are ignorant and yes they understand “Oc-talian”?, “Octo-nese”?, “Octo-maican”? it doesn’t matter because underneath all your mumbling and bumbling they understand you. What’s more interesting however are the only few smart people in this world, Chefs and Scientists. Throughout the course of the game your goal seems to reside around one thing, remain undetected. As you go about your daily choirs of looking after the kids, making coffee, mowing the lawn, family days out, and just flat-out trying to be a good dad. 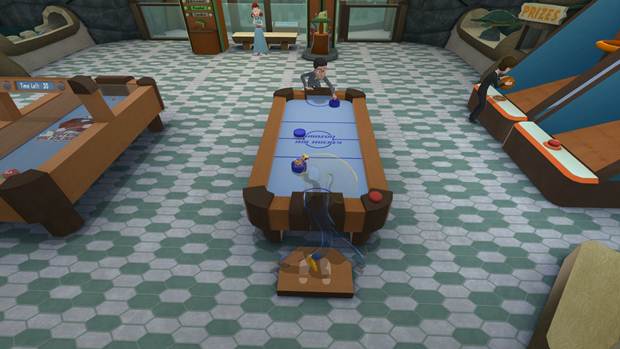 "Maybe if the extra time was taking to develop this suspicion meter and the rate at which people suspect your behavior, this could have been more of an important element to the game."

Now and then the “Normal” people as I like to call them are clearly aware of what’s going on, and they’re out hunting, or fishing if you will. There’s always gonna be a strange yet convenient excuse as to how you end up in these scenarios and they’re surprisingly plausible, as long as you accept the idea that an Octopus can cosplay as a Man. While the game plays on the silliness of other people in the game not everything here is a peaceful road to freedom and happiness. As you are tasked with being a dad and doing whatever it is dads are required to do with their families, the more badly you do it the more people will suspect your looney antics of doing such.

Each character in the game carefully has their eye on you and raises a level of suspicion that the player can keep track of in the form a bar, located at the bottom of the screen. The more it fills the more they’re onto you. My only gripe with this is that it wasn’t pushed far enough and despite your own clumsiness of knocking down every aisle in a supermarket, stepping on the cake at your own wedding, and destroying the gift shop of an aquarium, it wasn’t that much of a challenge to overcome the levels. Maybe if the extra time was taking to develop this suspicion meter and the rate at which people suspect your behavior, this could have been more of an important element to the game.

With that being said however it’s quite easy to recognize how this could have ruined the game, and caused a serious conflict to its purposely screwed up controls. I will say it’s up to the player if they feel the use of challenge was implemented well enough, but the catastrophic nature and silly use of actually navigating the character would need to strike a serious balance against it. 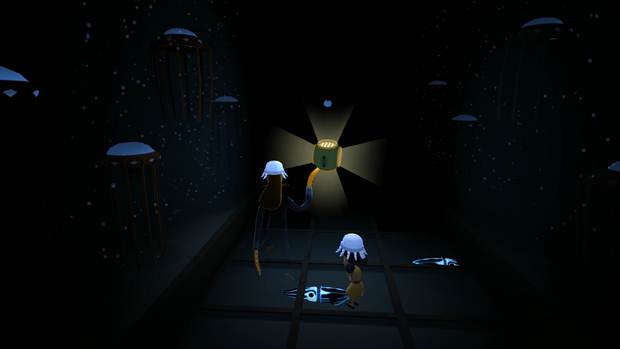 "The replay value of Octodad is fairly descent, free play mode allows you to replay completed levels on the basis of a timer, but the one you should have your eye on is the cooperative play."

From a visual standpoint Octodad: Deadliest Catch bares resemblance to quite a few well known sources from television-based entertainment. I will add to that statement beforehand that it is in noway ripping any of them off, just a spark in resemblance. Octodad carries a mix of Seth Macfarlane’s American Dad and Nickelodeon’s Old School classics Jimmy Neutron and Spongebob Squarepants. In a game that carries a narrative that’s as silly as this it seems like a perfect mix.

Graphically and performance wise the game keeps itself at a minimal for the PC settings available. It doesn’t suffer from any hiccups, screen-tearing, or glitches, and other than that it performs like a charm. Not much can be said on the other options available other than the choices for rebinding your keys, adjusting three levels of audio, and toggling on and off elements from the display. The replay value of Octodad is fairly descent, free play mode allows you to replay completed levels on the basis of a timer, but the one you should have your eye on is the cooperative play.

If you didn’t approach the game first-time round with the intention of partnering up then now is the time. Each player is given the opposite limbs to maneuver and it’s up to the two of you to work back and fourth and thinking as a team. This knocks you off your guard, and for those familiar with the Mind-Drifting technology from Guillermo del Toro’s Pacific Rim, you’ll understand me when I say that this couldn’t arrive soon enough. Octodad: Deadliest Catch is a short and fishy game that blurs the lines of Strange-ville and Crazy Coot City. All said and done it’s best played with a companion if you’re looking to experience it within its fullest potential.

Excellent level design, crazy physics, The concept of an Octopus posing a man is hilarious.

An extra hour or two would have been appreciated.

Final Verdict:
SUPERB
Octodad: Deadliest Catch is a silly game with a silly yet simple idea, and it works well in just being that.
A copy of this game was provided by Developer/Publisher/Distributor/PR Agency for review purposes. Click here to know more about our Reviews Policy.