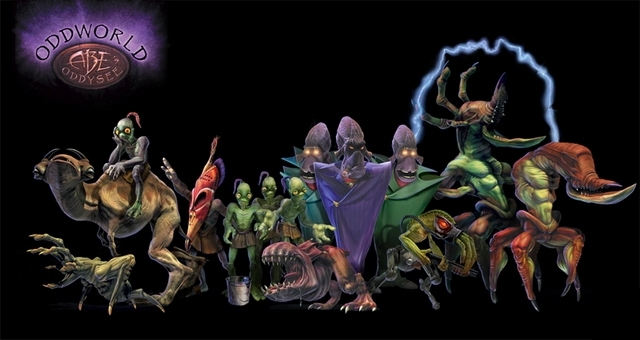 Details on already announced Oddworld projects have been confirmed as well as pleasing news that Munch’s Oddysee will be heading to PSN in HD.

The developer had previously announced the HD remake of Oddworld: Stranger’s Wrath last year for PC and PSN, but confirmed the PS3 version would support 3D, Move, YouTube uploading, as well as a “feature X”, whatever that may be.

An Abe’s Oddysee HD remake has also been confirmed. It will remain a 2D side-scroller with animated backgrounds. It too will land on PSN, but other platforms are to be announced at a later date.

The Oddboxx, which is currently only available on PC, will be hitting PSN and will include Munch’s Oddysee, Stranger’s Wrath, Abe’s Oddysee and the PSone Oddworld games.

An HD remake of Oddworld: Munch’s Oddysee is also coming to PSN and unannounced platforms.

However, there is another Oddworld game coming called Hand of Odd, and it’s a tablet game based on a “shelved” Oddworld real-time strategy game announced way back in 1998.

It features the usual Oddworld inhabitants like Mudokons and Glukkons, and the original design of the game will be modernized for iPad, Android tablets, Facebook, PC and Mac – platforms which are currently being “looked at” for the game by JAW.

Calling the game “casual rather than more intense,” Just Add Water’s Stewart Gilray said the game is still a ways off and a console release is unlikely.

“It works well with touchscreen interfaces or mouse control direct,” he said. “On consoles, however, you get analogue sticks or your Move controller. While Move is good for certain kinds of gameplay and it’s responsive compared to Kinect, it still isn’t that intuitive.

“We’ve not had experience with Kinect yet, but playing the games already out there for that, it does seem at the moment it’s got a lot of work to do before it catches up with that more direct, action kind of game.

“All the games that are out for it, you’ve got to do huge body movements to get involved in it, which is why it’s fun. With this, there’s a bit more thought involved, rather than flinging your body around a room, which is why we thought if we did direct control through touchscreen, you can put your finger on it, or with a mouse with PC or Mac, and just drag items.”

That’s a lot to take in for Oddworld fans.

Thanks to Neogaf for the info.