Posted By Shubhankar Parijat | On 01st, Jan. 2018 Under Article, Reviews

Okami may have been something of a commercial failure when it first launched on the PS2 back in 2006, but, as the few people who played it then will testify, it rightly went down as one of the greatest games of its generation. Eleven years later, it’s just as good, just as beautiful, just as inspired. That’s a testament to its timeless look and solid mechanics, and though there are a few issues in this game that cannot be ignored, Okami HD is the perfect opportunity to visit (or revisit) one of the most vividly imaginative video game worlds of all time.

The thing that is associated most commonly with Okami is its canvas-style cel-shaded visual palette- and for good reason too. More than anything else, the game looks like a beautiful painting in motion, with beautiful embellishments and animations further helping bring this incredibly beautiful world to life. Every area you visit is crafted with great care, every character you meet designed with great love. Even the tiniest little things such as the trees or the buildings have the kind of unique personality to them that you don’t expect to see in a video game all too often. On top of that, the visual enhancements that Okami HD has received are also top notch, with everything looking sharper and crisper. In fact, on the PS4 Pro, the game is rendered in 4K resolution, which makes the game look even more beautiful than its base version. 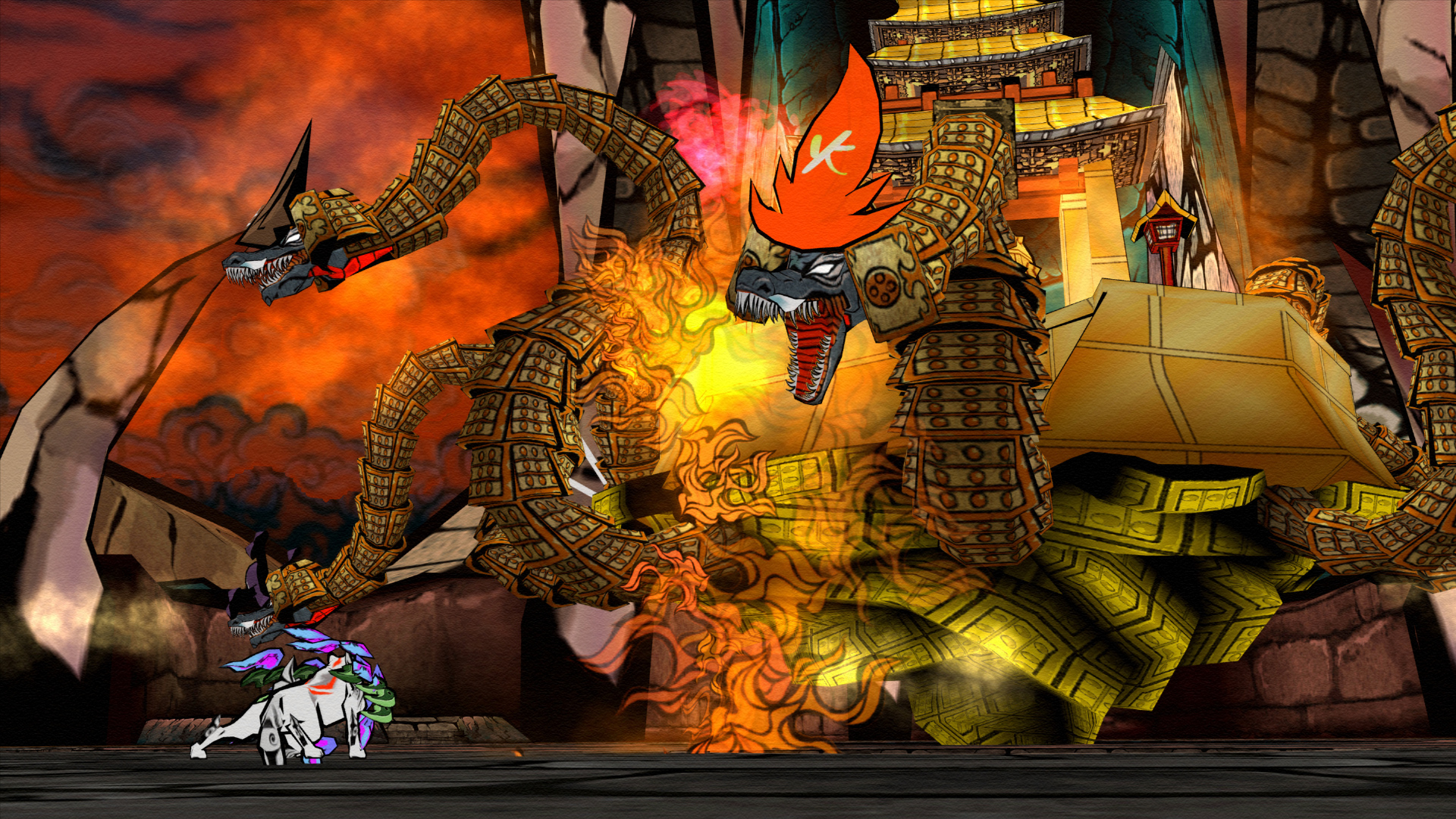 "More than anything else, the game looks like a beautiful painting in motion, with beautiful embellishments and animations further helping bring this incredibly beautiful world to life."

But the canvas-style look of Okami isn’t part of the game just because it looks as good as it does- no, it’s intrinsically tied to everything that makes Okami… Okami. You play as Ameterasu, who’s taken the form of a white wolf, and who, with the help of spirit companion Issun, must bring back life and colour to a dying world. You do that, of course, with the help of your celestial paintbrush, making use of it in all walks of the game, from the puzzles to the combat.

The puzzles aren’t mind-benders or anything, and the answers to the questions the game poses are usually simple and snappy. Paint the sun to change night to day, draw a circle around a tree- things like that. It’s simple and effective, always entertaining but, sadly, never quite challenging. It’s on the combat side of things that the use of the paintbrush becomes truly interesting. While thanks to your limited and depleting inkpot reserves you can’t whip out your paintbrush whenever you wish, meaning that combat isn’t all about painting, it’s still a central mechanic.

For instance, you can draw traps and hazards for your enemies to fall into, which is something that comes in handy during especially tough battles, such as during times when you might be outnumbered, or during some of the game’s more challenging boss battles. There’s a number of techniques to learn for your paintbrush too, so Okami always manages to keep things interesting. When you aren’t using your paintbrush during combat, melee attacks are nimble and snappy, and pulling off combos is extremely satisfying. This mix of melee combat and using your paintbrush makes for a combat system that is unlike anything you’ll see in a game, and is one of the many things that helps Okami stand out. 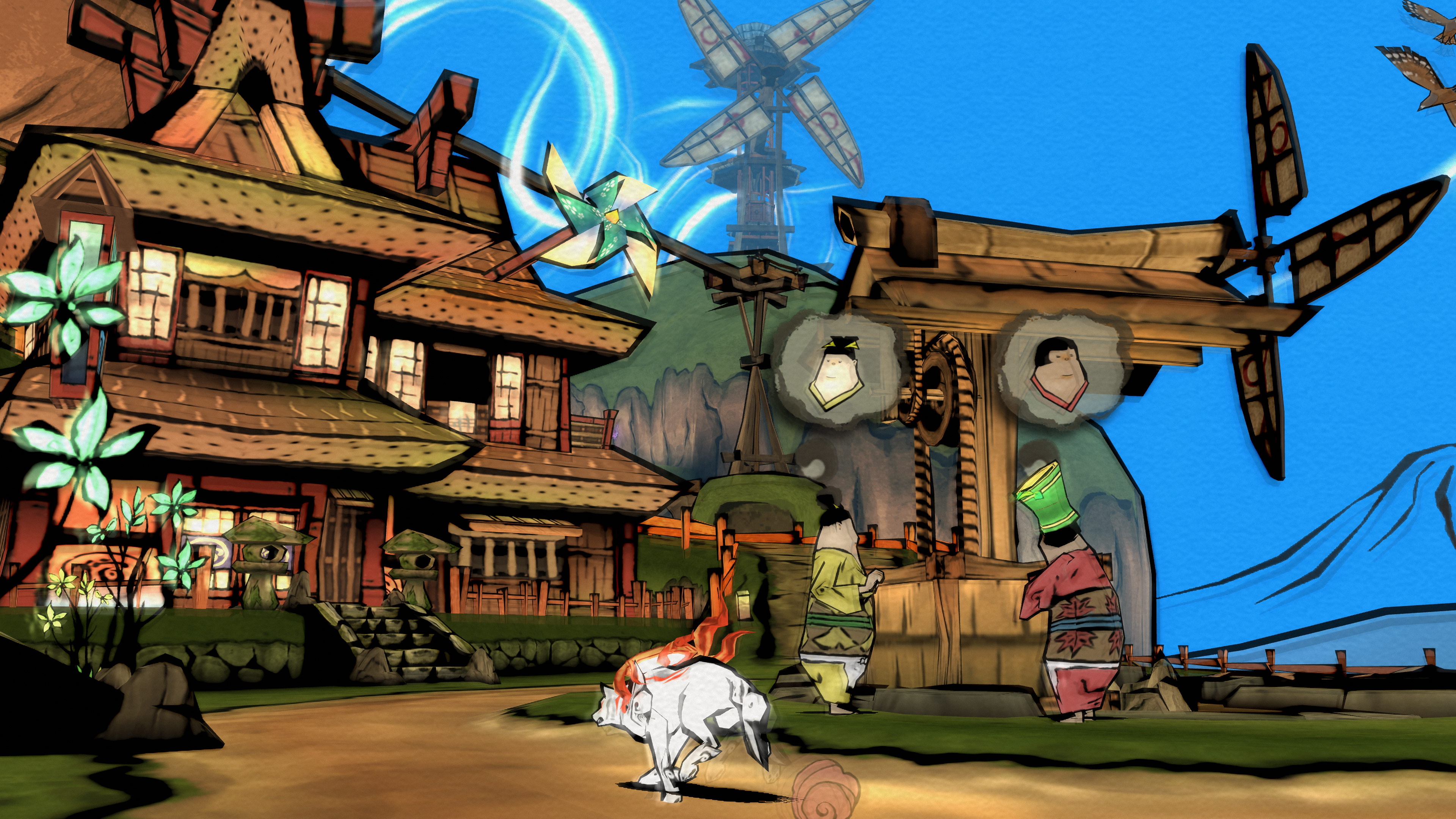 "This mix of melee combat and using your paintbrush makes for a combat system that is unlike anything you’ll see in a game, and is one of the many things that helps Okami stand out."

It must be said, however, that the controls end up feeling finicky on a few occasions. When the game launched on the Wii, it was an absolute treat for its fans, since painting in the game using actual motion controls made it that much more immersive and responsive. By comparison, on the PS4, Okami doesn’t feel as fluid or as natural. That isn’t to say the controls are bad, by any means, or that they can get in the way of your enjoyment. The control scheme itself is quite easy to pick up, actually, but as someone who’s played the game’s Wii version, I just couldn’t help but draw comparisons between the two. It also doesn’t help that Okami HD is occasionally let down by a wonky camera, which is an issue that often becomes hard to ignore, especially during fast-paced battles.

Outside of combat and puzzles, Okami HD is still a game that is brimming with content. This is a long game, to say the least, full of side quests and side activities, and all in all, it will take you anywhere between thirty to forty hours to complete it. Finishing side quests usually involves you helping the NPCs and side characters you come across, which further results in you gaining more followers. That, in turn, grants you further strength to learn new abilities, or power up your old ones. All activities you take part in in Okami feed into each other, so almost nothing feels like filler content.

It also helps that the characters you come across are usually quite well-written. Despite being set in a dying world, Okami doesn’t fall short in the humour department, and thanks to its witty and intelligent writing, you’ll often find yourself chuckling or smiling at something you see or hear in the game. The one exception to this is Issun, your spirit companion. Issun’s constant rambling in the background, serving the function of tutorials and telling you where to go next or what to do in a certain situation, start to become a little grating after a while, and the worst part is that he just never shuts up. Sure, after a while, I learnt to block him out and just enjoy the game, but some people might still find the constant blabbering a little overbearing. 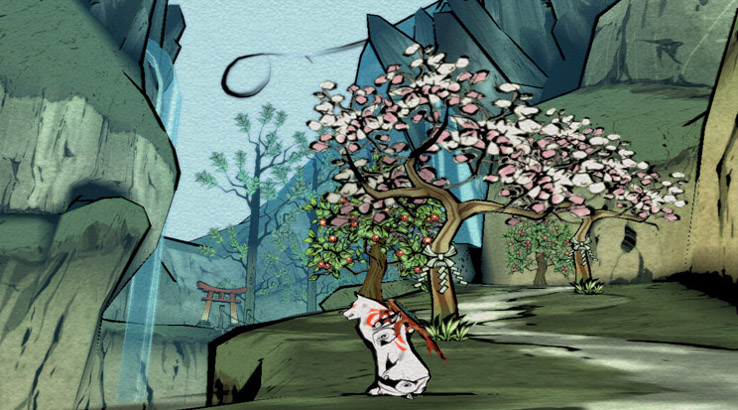 "All activities you take part in in Okami feed into each other, so almost nothing feels like filler content."

From a narrative perspective, Okami is surprisingly good. It draws on Japanese folklore quite heavily, but even if you’re not all too familiar with the same, its inherently interesting setting and its numerous twists and turns along the way will make sure that you’re constantly invested in the events the game portrays. It’s nothing to write home about, and it’s far from being one of the game’s strongest aspects, but it’s still solid.

Okami was criminally overlooked back in the day, in spite of how well received it was- a great many people never got to play it, which is a crying shame. Okami HD, however, is the perfect opportunity to experience one of the most innovative and enjoyable games of the last few years. It’s rare to come across a game that is over a decade old that somehow manages to feel perfectly in line with the quality of experiences you’d expect even today, but that is exactly what Okami HD is.

Beautiful visual style makes the game look like a painting in motion; Excellent, fast-paced combat; Lots of side activities; Well-written side characters and a surprisingly interesting narrative.

Controls feel a little finicky at times; Wonky camera; Issun doesn't know how to shut up.

Okami is still as beautiful and enjoyable as it was more than a decade ago, and that is an incredible achievement in and of itself.

A copy of this game was provided by developer/publisher for review purposes. Click here to know more about our Reviews Policy.
Tagged With: capcom, clover studios, Okami HD, pc, ps4, Xbox One