There were a whole lot of developers showing off and talking about the projects they were working on at GDC this year, and we now have statistics that show exactly which systems the developers seem to be the most excited about.

As per an infographic released (see below) that shows the percentage of the number of games developers have in the works for each system, the PC (including OSX) seems to be the most popular platform for developers, with 53 per cent of them working on games for the platform. The PS4 (including the Pro) and the Xbox One (including the Scorpio) each have a decent share to themselves as well, at at 27 per cent and 22 per cent respectively, while 24 per cent of all developers are working on something for virtual reality headsets.

However, what is interesting (and frankly a little worrying) is the fact that only a tiny 3 per cent of the developers at GDC are working on something for the Nintendo Switch. It makes sense to argue that it is a very new system and thus the numbers would make sense, but the numbers are still very, very unimpressive, and do not necessarily bode well for the system.

However, there’s also the chance that this just represents a fairly dry launch year for the system, with hopefully a lot more coming our way in the near future. What are your thoughts on this? Sound off in the comments section below. 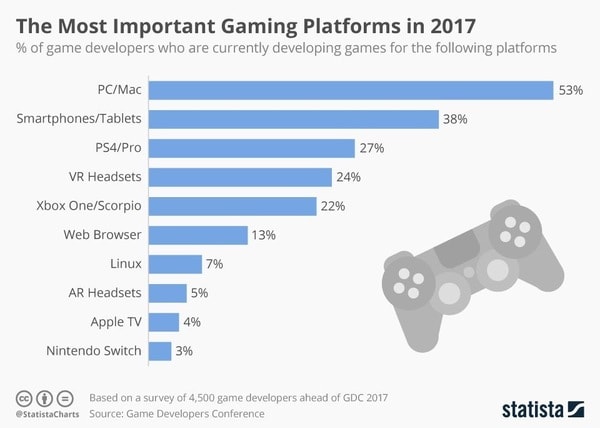