Everyone fantasizes about oversized robots fighting at some point. It’s seemingly part of human nature to consider what it would look like when a pair of towering metal beasts try to take each other down, almost always destroying the nearest city in the process. In the most literal way, Override 2: Super Mech League lets you live out these fantasies. The sequel to 2018’s Override: Mech City Brawl, Super Mech League brings a primarily melee-focused combat system to the skyscraper-sized mechs duking it out. Its enjoyability is mostly surface-level, though, as the initial glamour of controlling mammoth robots in gorgeous, colorful arenas cracks underneath the limited ways to play and the shallow combat system that lacks reward for more nuanced players.

Override 2: Super Mech League wastes very little time in getting you into the thick of things. There’s not much in the way of pre-menu cutscenes or backstory, and when it loads, you’re free to jump right into whichever mode you want to play. What acts as the campaign or career mode is the eponymous Leagues mode, which is the only true non-Quick Play mode, but it doesn’t offer much in the way of lore or story. Effectively, this mode is just a structure for you to experience each of the different types of battles and rank up along the way. There aren’t predetermined boss battles or major fights; instead, before every battle you’re given the option of which event to participate in, whether it’s a one-on-one, two-on-two, 4-player free-for-all, or another special type. The game doesn’t force you to play any of them in any order, and because every match is so short, taking a max of 2-3 minutes, it’s good to have such agency for the path you want to take. Every match can be played either online against other players or offline against bots, and, while the online option is great for the multiplayer community, I usually found it quicker and more stable to play offline.

"Its enjoyability is mostly surface-level, as the initial glamour of controlling mammoth robots in gorgeous, colorful arenas cracks underneath the limited ways to play and the shallow combat system that lacks reward for more nuanced players."

As every mech is locked until you can buy them with credits in the main menu, the tutorial set of matches gives you access to five predetermined mechs to use until you’ve made enough credits to buy your first. Mercifully, there are no microtransactions to be found, so each mech is priced equally and fairly, though it will take a bit of grinding to unlock all 20 of them and counting. Once you do buy your first mech, you’re sent on a path to conquer the ranks of each type of battle. Just as you’re allowed to choose which type of battle to participate in before each match, so too do you rank up in each individual match type as you play. So if you only want to fight in one-on-one matches, you can do so, but you’ll only be ranking up in the one-on-one league. This allows for a nice balance that lets you play how you want but won’t let you skate by and rank up in leagues you’re neglecting.

To spice things up and add a hint of a real structure to the Leagues mode, you have an agent who talks to you between each round, offering what feels like mostly filler but sometimes adding a helpful tip or two. Her most pressing information is the sponsors you can sign, which give you specific goals to complete within a time limit. These time limits are set in real time, instead of in number of matches or in-game time, so if you set your controller down to take a break, you’re out of luck and are at risk of losing future sponsorships with that company. While these sponsors add another element to gameplay, I normally found them to be more onerous than additive. They generally ask you to perform a single move, like a grab or block, a certain number of times within that time limit, but they often ask you to do them so many times that they effectively force you to spam that move if you don’t want to lose their business. I rarely needed to grab an enemy dozens of times in a match, but for the quotas they’re asking you to reach, you might need to focus on that instead of using your other combat abilities.

Like in the first game, the combat in Override 2 is primarily melee-focused. While every mech has their own unique attacks, they each have the same framework for their move sets. They each have punches and kicks, mapped to the left and right shoulder buttons, respectively, and each has a light and heavy variation, mapped to the bumper and trigger, respectively. On top of that, combinations of the four shoulder buttons, like both bumpers or the right bumper and trigger, call for special attacks that deal more damage and are generally more interesting to watch. It’s easy to string together basic attacks, but it’s much more enjoyable to watch special attacks make their mark. The same is true for Ultimate attacks, very high-powered moves that only charge in a certain area of the map at certain times but deal massive damage. With the Ultimate attacks, they’re much more interesting to watch than they are necessary to use, as the effort required to charge them usually outweighs the damage they actually do. 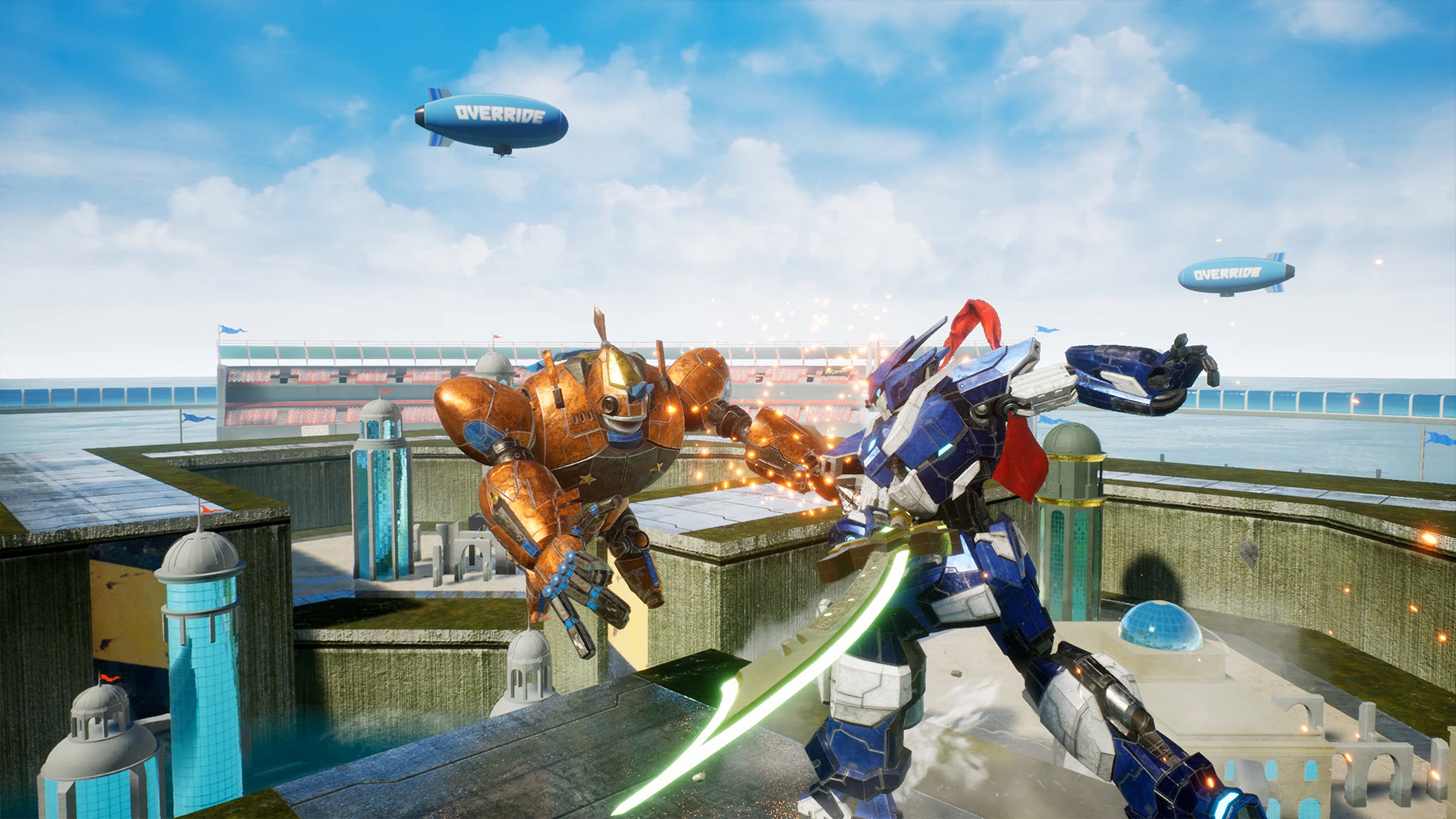 "Mercifully, there are no microtransactions to be found, so each mech is priced equally and fairly, though it will take a bit of grinding to unlock all 20 of them and counting."

While they do have similar combat frameworks, each mech is given their own unique set of attacks, generally based on their archetypes, of which there are just a handful that each of the 20 mechs can comfortably fit into. The heavy mech is arguably the most common, which includes mechs like the fish-shaped Pescado or the reptilian Metageckon, while the balanced or agile mechs, like Watchbot or Shifu, are more unique. You can generally understand the move types that any character will have just by looking at them. The heavies are slower and more powerful, while the smaller mechs are faster and try to hit multiple times with lower individual damage. I did end up finding a few characters that fit my personal play style, but this was more based on individual preference over any real unique qualities within a certain archetype.

The potential complexity in the combat is ultimately undermined by the lack of a necessity to actually dive into it and learn that complexity. There are combos to play with and nuances to learn, but I found that almost none of my matches boiled down to anything more than button mashing the handful of damaging attacks I knew my mech had. There are times where combos hit and are really satisfying to watch, but many of the times that I tried to learn those combos or figure out a better way to use my attacks, it was reinforced that it would be both easier and more successful to button mash my way out. Because of that, the combat doesn’t feel particularly deep in any way. Once I had figured out which of my mech’s attacks could actually deal damage, instead of dashing away or something similarly unoffensive, I had learned everything I needed to win almost every match I played, even when I started ranking up to higher difficulties. The only times I really tried to use certain attacks were when I wanted to watch their animations, like Toasty’s setting on fire or Pescado’s hilarious suplex, but I rarely felt an incentive to really learn the mechs’ move sets with any sort of depth like I would in many other fighting games.

Visually and tonally, Override 2 achieves exactly what it sets out to do. Each character is unique in their design, and they all incorporate a wide range of colors and influences that give them their own personalities, to the point that I wish there had been more of an effort to really explore these characters. There’s a lot of potential for a story in the vein of recent hero shooters, but we really don’t get to experience much of the characters at all. With the lack of a true story in Leagues mode, it’s a glaring opportunity to explore the characters and create a true structure for these fights. Similarly, I’d love to understand the locations in which they fight, as the environments are equally as enticing and colorful. While they can feel too small for these specific matches, especially those with more than two fighters, each environment feels unique and, along with each character, is beautiful. Even the most basic arenas are well-designed and fun to look at, especially on the new generation consoles. 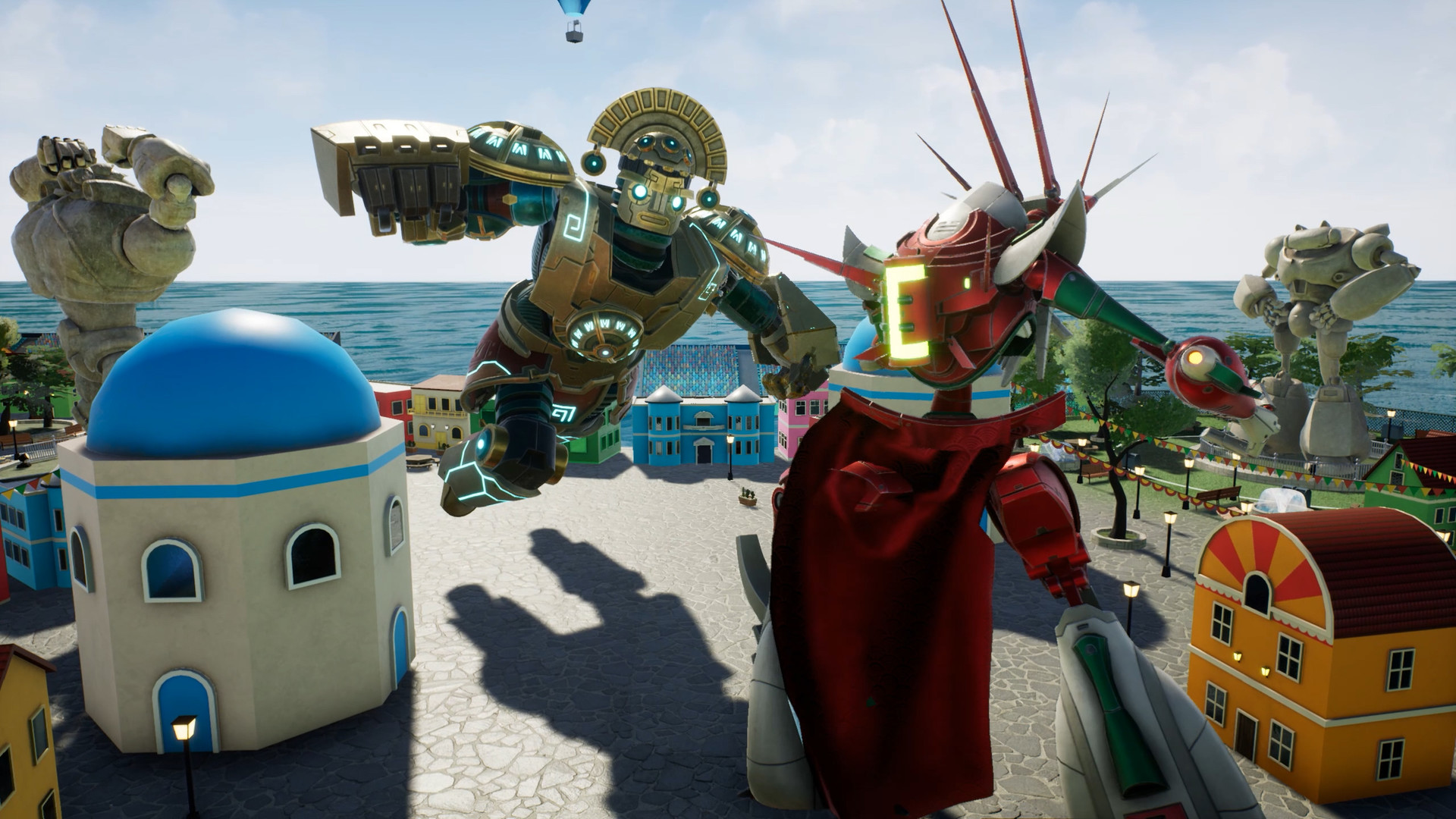 "The potential complexity in the combat is ultimately undermined by the lack of a necessity to actually dive into it and learn that complexity. There are combos to play with and nuances to learn, but I found that almost none of my matches boiled down to anything more than button mashing the handful of damaging attacks I knew my mech had. "

There are a lot of things about Override 2: Super Mech League that are well-designed and well-executed. On a visual level, it’s beautiful and conveys an appropriately affable tone that could have been further expanded upon, and its centerpiece Leagues mode isn’t much of a story, but it offers an acceptable framework for fighting each of these fights without suffering from the imbalance it could have fallen into. Unfortunately, the barebones framework of the rest of the game forces an emphasis on the combat, which doesn’t require as much nuance or depth as is necessary to stop it from getting old after just a few fights. Having a wide range of mechs with unique move sets helps delay the inevitable, but the shallow combat system makes the entire experience feel less rewarding than it should have. You can come to Override 2 for the lovable characters and beautiful presentation, but you’ll likely feel like you’ve gotten everything out of it just as soon as you’re starting to get into it.

Final Verdict:
FAIR
Override 2: Super Mech League has many of the pieces that would make it work as a full package, but when the oversized mechs actually go to battle, it becomes a shallow, unrewarding shell of its potential.
A copy of this game was provided by Developer/Publisher/Distributor/PR Agency for review purposes. Click here to know more about our Reviews Policy.