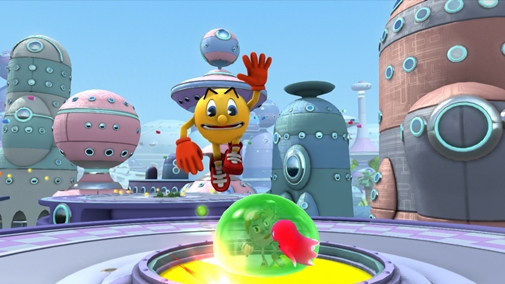 Namco Bandai’s Pac-Man and the Ghostly Adventure, a new reinvention of the classic gaming icon based on Disney’s animation, launches today in North and South America on the Xbox 360, PlayStation 3, Nintendo 3DS, and Steam. The new title involves a plot heavy emphasis that nonetheless strives to maintain the classic elements that Pac-Man is known for.

Pac-Man and the Ghostly Adventures also includes an all new multiplayer mode that introduces a twist to classic Pac-Man sensibilities by letting players play as Inky, Blinky, Pinky and Clyde, as they compete against each other in increasingly complicated mazes to try and catch Pac-Man.

“Pac-Man has been a cornerstone franchise at Namco Bandai Games for over 30 years touching the lives of multiple generations of gamers,” said Chris Gilbert, Senior Vice President of Sales and Marketing at Namco Bandai Games America. “From Pac-Man’s arcade debut in the 80’s that kick-started his meteoric rise to becoming a pop-culture icon to his hit animated series that premiered this year on Disney XD; Pac-Man continues to be a global entertainment brand, winning new fans and bringing fun and laughter to families the world over.”

Stay tuned to GamingBolt as we bring you more coverage on the newest game starring gaming’s oldest icon.