Set in the continent of Imperia, divided into 9 kingdoms, in the wastelands of Akanos. A tale of romance, corruption and horror is woven in the first title from Ganbarion capping off a series of three JRPGs – The Last Story and Xenoblade.

You are tasked with saving the mysterious yet endearingly sweet Elena’s life as she is cursed into becoming a gruesome, tentacle waving beasty as time passes. The cure? 13 pieces of “Master Flesh” ripped from the heart of 13 colossal beasts ruling their own tower making up a fortress held together by gigantic chains wobbling over the deepest of chasms known as “The Scar”. 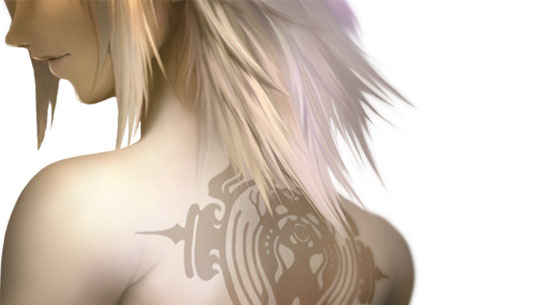 The whole game revolves around what is in its simplest forms a fetch quest. A rather tense, panicked and oftentimes revolting one at that. As time ticks on, displayed on the bottom right of the screen, Elena will slowly transform into a hideous beast where if she reaches full transformation she will be stuck like that. Game over. The mainly silent protagonist of the story – Aeron is set the task of adventuring up 13 different towers to slay the Master Beast atop and retrieve its flesh in which to feed to Elena. Yes, those scenes are exactly as horrific and stomach churning as you are imagining. Seeing a sweet and innocent girl corrupt herself through eating slimy, purple, pulsating blobs of flesh has its way of invoking sympathy for a character.

The main hook revolves around each foray into the towering fortress being a timed mission. If Aeron is gone for too long, he’ll return to find a pleasantly slimy, tentacle fiend instead of the endearing Elena. To prevent this from happening Elena can eat the flesh of the regular Beast flunkeys roaming the towers to stave the curse off that little longer. This means that the further you get to reaching the top of the tower through a series of less than taxing puzzles the more likely Elena’s sat back in the hub shrieking at her own wild tentacles appearing. The trick is to locate shortcuts and pathways leading back down to the bottom of the tower so that if you find you’re cut short three quarters of the way to the top you can slash a bit of prime cut Beast flesh, scurry back down to the bottom of the tower and deliver it to Elena just in time. This also means you have to make your way back to the top again with the knowledge now of where the correct paths are and the puzzles you solved already in place. As I played the first two towers I managed to finish both of them in one trip however I felt no rush as I didn’t even realise I was being timed. Although I did return from the second tower after a longer excursion to find Elena startlingly halfway through her horrific transformation. 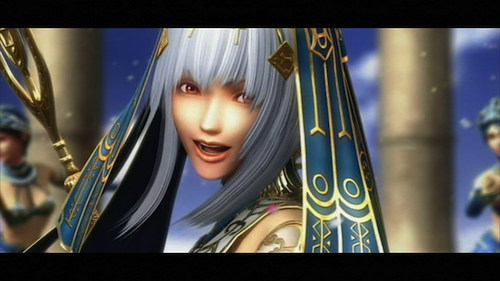 Aeron is presented with the impressive weapon of a large chain that not only helps whip the Beasts of each tower into shape but also is used to navigate the environment and solve puzzles. Aeron is controlled using the nunchuck while his simple repertoire of combat moves revolves around hammering the A button to create simple combos. Aeron can dodge attacks however this feels incredibly clunky and the whole combat system lacks the fluidity and complexity of say other action RPGs such as Devil May Cry. However the addition of the chain to Aeron’s arsenal means you can point using the Wii-Mote at any Beast on screen and tap B to fire the chain at the enemy this will create a link between Aeron and the beast and allow him to either throw it around like a rag-doll or tie it to another nearby Beast. This means when Aeron attacks one of the Beasts it deals damage to both of them which is an interesting and useful feature. Once the chain is attached to a Beast you have the option of tightening the chain by pressing a button on the nunchuk and shaking the Wii-Mote once the tension has reached a satisfying level to deal a large amount of damage. The more tension the chain has the more damage is dealt, with this in play battles quickly become a case of dodging into a far corner and snaring your enemies with the chain for as long as you can without being attacked by others.

Pandora’s Tower features many different environments as each tower has a different theme of sorts. For example the first tower revolves around a huge tree growing from the base right up to the top and so on. Each tower has puzzles to be solved and rooms of enemies to be defeated which is all well and good despite being hugely clichéd however none of these aspects are very inspiring in the slightest. The puzzles are often simple and can be solved with a few points and clicks with your trusty chain. This leaves much to be desired and the journey to the top of the tower, which should feel exhausting yet hugely rewarding, doesn’t feel half as epic in scope as it should be. In the exterior shots of these towers they’re huge! So why does it take half an hour to reach the top of the first two? The enemies are generally bland and revolve around the usual gaming baddie tropes. Scary wolves? Check. Flappy bat things? Check. Generic lumbering demon? Check. Giant walking tree creature that spews demons? Um. Combat with these creatures requires little changes to your fighting techniques and tactics as they can usually all be dealt with in the same manner. One thing that I found annoying was that I would clear a room of lumbering monsters only to leave for a second and return to find them fully respawned waiting for more chain whippage. Rooms that respawn enemies is a no no. The boss fights with the Master Beasts are at times creative but all revolve around the same action which is to hook the clichéd purple glowing weak point, wait for the chain to reach full tension and then tug to deal damage. Doing this while avoiding all of their repeated attack patterns is the aim of the game when it comes to defeating the big nasties and it just doesn’t pay off.

The textures are muddy and bland and each tower features similar looking rooms with blocky models and uninspired environmental designs. With this game being originally recorded in Japanese we lucky Westerners get the privilege of having it dubbed in English and what an awful mess that is. The voice acting is terrible for a start, Elena has this cute almost cockney English accent going on while Aeron is American. What’s that all about? Not only that but you can almost hear the dull hiss of the recording mics when Aeron’s dialogue is played which makes it seem like his voice is coming from someplace else entirely and stands out a mile during the cutscenes.

Although the narrative is imaginative and through some tenderly crafted cut scenes the characters become instantly likeable and familiar the gameplay is far too clunky and uninspired to become the next Legend Of Zelda or Final Fantasy. An interesting blend of button bashing and Wii-mote pointing redeems the game slightly however the whole system could be refined and polished a whole lot more to create a more altogether satisfying and slick experience.

This game was reviewed on the Wii

Great story full of tender moments and a satisfying twist; The Beast flesh eating scenes are truly disgusting yet sad; Interesting and fun use of the chain weapon

Final Verdict:
FAIR
A clunky, uninspired generic dungeon crawler that shows on occasion a flicker of genius with the chain mechanics and a tender love story beneath it all.
A copy of this game was provided by Developer/Publisher/Distributor/PR Agency for review purposes. Click here to know more about our Reviews Policy.