Path To Mnemosyne Interview: A Surreal And Hypnotic Adventure

DevilishGames' director David Ferriz answers some of our questions about their upcoming game, Path to Mnemosyne.

Path To Mnemosyne is a n upcoming game that definitely looks interesting, but is also hard to pin down into any genre. The game follows a girl in a world of infinite zoom and it will feature a mysterious story, some disturbing music, and some puzzle solving.

There’s not much more we’ve known until now, so we reached out to DevilishGames for some answers and its director David Ferriz answered the following questions. 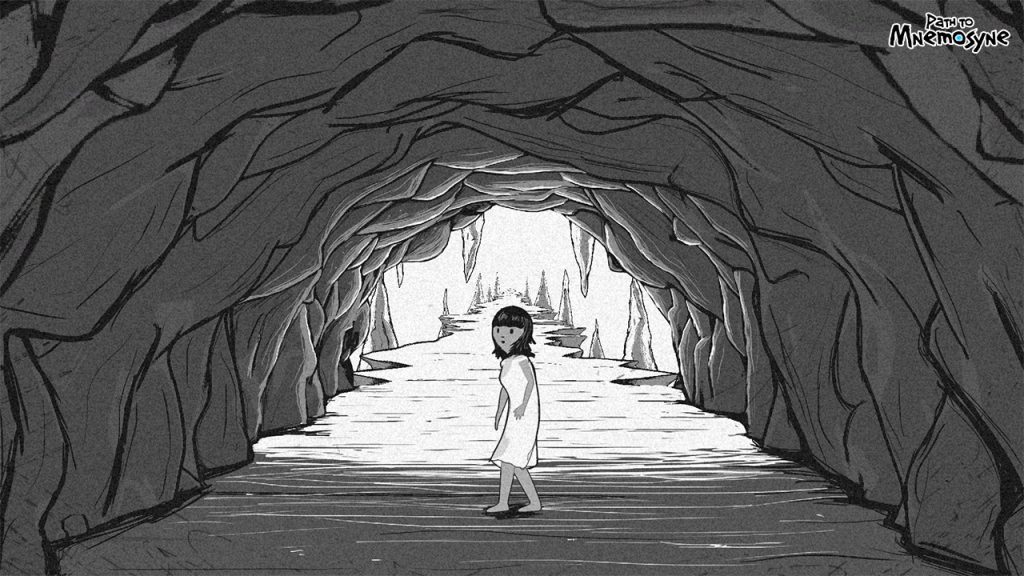 "The project was born from an experimental phase, and the main inspiration was the “infinite zoom”."

With mainstream game developers having to do more of the same, would you say indie developers have a greater space to experiment and create titles such as this one?

For a small company like us, innovation and experimentation are a must. We don’t have enough budget either human resources to compete in graphics, technology or marketing with the big AAA games, so the best way for us to try to stand out and attract the attention of the media and public, is to create new and original concepts. Basically, we are constrained to innovate.

This is a game quite different in nature from your previous title, King Lucas. What caused the change in direction?

DevilishGames is part of a company called Spherical Pixel, in that company we create advergaming and serious games for third parties and this is really the business that allows us to pay the team payrolls every month. The indie games that we develop under DevilishGames label, represent a way of escape for the team. Basically, we do the projects we feel like doing at any given moment. With King Lucas we wanted to pay tribute to the 8-bit platform games of our childhood, like Alex Kidd, Castle of Illusion or Asterix, but without falling into the typical pixel art graphic style. Basically, we wanted to do a platform game based on our memories.

Path to Mnemosyne is a very different project It is much closer to the line of innovative and experimental development that we had during our trajectory creating Flash games for portals like Newgrounds or ArmorGames between 2009 and 2014. With Path to Mnemosyne, we wanted to do something really new.

What are some of the inspirations behind the unique art style of the game?

The project was born from an experimental phase, and the main inspiration was the “infinite zoom”. That is the key idea on which we have been building the story, the scenarios, mechanics, and the theme… But in the beginning, we only knew we wanted to do something with an “infinite zoom.”

From what we’ve seen in the trailers, the game appears both relaxing and disturbing at the same time. Is this something you are aiming for with the game?

Yes, the game is intended to be an experience where the player will experience different feelings. We use optical and auditory illusions such as infinite zoom or Shepard tone to achieve a total immersion.

On that note, the music especially conveys a feeling of dread. What are some of the inspirations behind the music?

The music is present in the game in a very discreet way. For much of the way, there is no music, just a few sound touches. To create that atmosphere we were inspired by bands like Portishead. 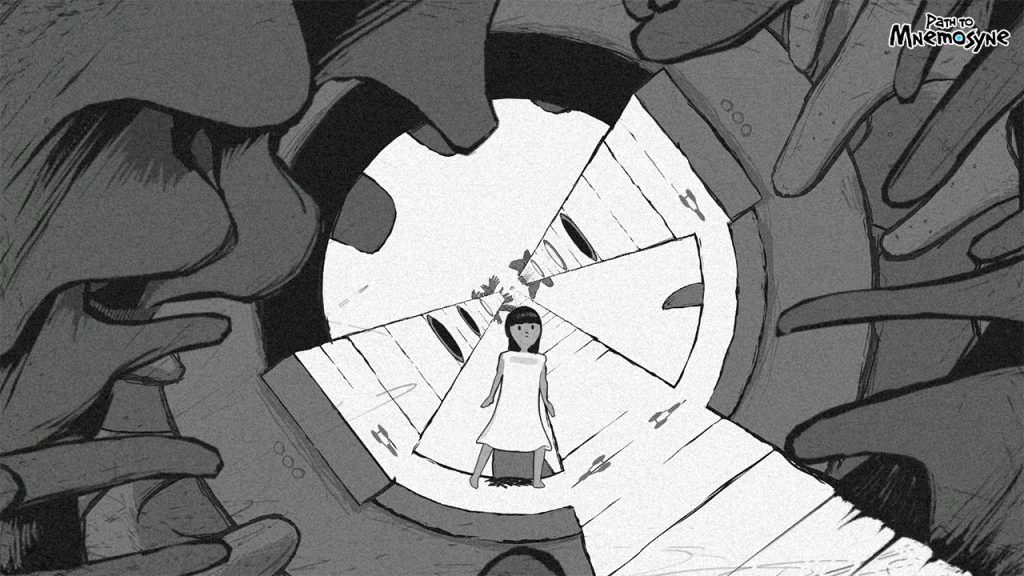 "The biggest challenge was to design a gameplay mechanic that would take full advantage of the infinite zoom technique without falling into the hackneyed mechanics of runners or little ships that seemed more obvious."

What can you tell us about the game’s narrative?

We are very clear about what we want to tell, but we also want to leave the door open for users to interpret the story in alternative ways. I would not like to make any spoiler about it, so I will only say it is a story in which only three characters take part 🙂

What are the puzzles in the game going to be like? Will they be quite challenging at times?

We don’t want to create an extremely difficult game. The main thing, for us, is the experience that the user will live along the way. It is true there are some more difficult puzzles, but the most of them can be solved thinking a little or even with the help of a piece of paper and a pen. Path to Mnemosyne will not be a specially long or difficult game.

The biggest challenge was to design a gameplay mechanic that would take full advantage of the infinite zoom technique without falling into the hackneyed mechanics of runners or little ships that seemed more obvious.

Do you have a release date set for the game yet?

Not yet, but we hope it will be this year.

We have the graphics ready for 4K, but the status of the console versions is not advanced enough to confirm it. 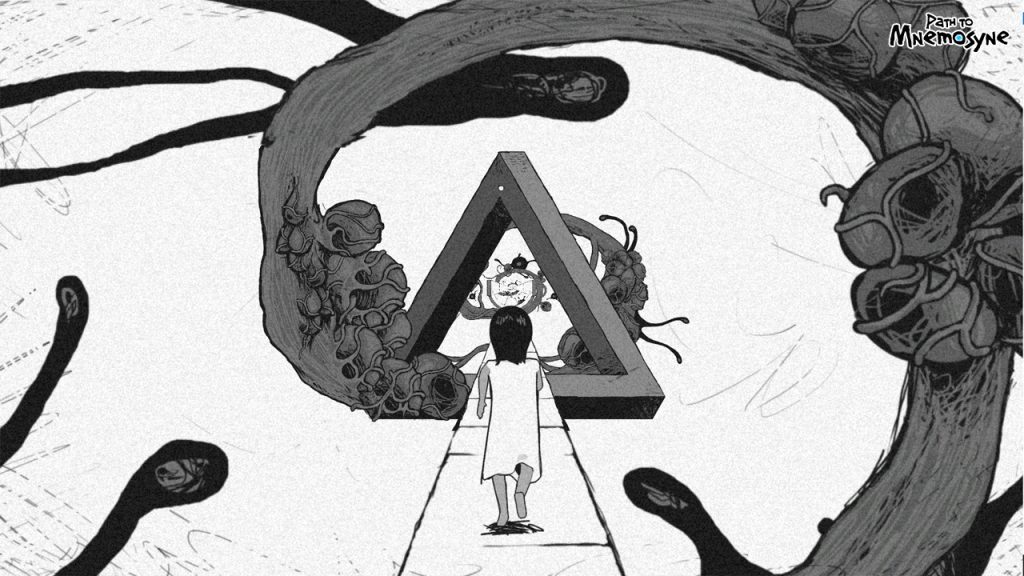 "For the next generation of consoles, we would like to see more than just power. We would also like to see new possibilities for interacting with video games, something like what Wii did at the time."

There will be no substantial technical differences between the versions. Perhaps the most different will be the PC one, as we will use the mouse for some puzzles.

How different is the Switch version compared to the PS4 and Xbox One?

We want console players to have the same experience on all platforms, so there won’t be any big changes. Maybe in Switch we can use touch control for some puzzles that are controlled with the mouse on the PC, but we haven’t started working on it yet.

We are not enthusiasts of the free-to-play model, we like to dedicate our game design efforts to having fun and surprising the player instead of focusing on getting them to buy coins or in-game items. As long as we can self-finance our own developments, we will continue to maintain this philosophy.

For the next generation of consoles, we would like to see more than just power. We would also like to see new possibilities for interacting with video games, something like what Wii did at the time. We don’t care too much about power, great experiences can be created with the current power.

Probably, but we hope it will not only focus on that.

I would like to thank you for giving us the opportunity to talk about Path to Mnemosyne in your publication. And I would like to tell your readers that, as we prepare the console versions and finish the PC version, they can now add our game to their Steam wishlist. It’s always motivating to see people playing your game!