The Crimewave Edition brings some hot heist action to the current gen consoles.

Payday 2: Crimewave Edition (hey, I didn’t come up with the name) will be launching on PlayStation 4 and Xbox One on June 12, 505 Games and Starbreeze announced today. The package will be the most current and updated form of the game yet, featuring a year’s worth of DLC and updates included in the base game right off the bat.

PAYDAY 2: Crimewave Edition also introduces new high-octane heists, as well as new contacts The Dentist, voiced by actor Giancarlo Esposito (Breaking Bad’s Gustavo Fring), and The Butcher, voiced by Mira Furlan (who also starred in Lost and Babylon 5). In addition to new jobs and multi-stage contracts, a wider range of weapons such as shotguns, sniper rifles and grenades deliver an explosive kick to the new enemy archetypes that players will face. And, of course, the graphics have been updated to 1080p as well. 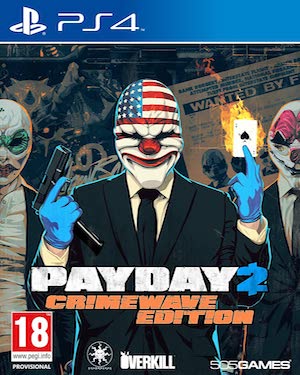