It was Matthew Arnold who once said that art should be mainly judged on whether it achieves what it sets out to do. It is with this in mind that this review must come in two parts: Whether I enjoyed it and would recommend it, (this is what is fuelling the numerical score) and whether the children this game is clearly marketed at will enjoy it. So for starters we’ll roll with my response to it. Not surprisingly I didn’t find much to love about the antics of Peppa Pig, and here’s why:

Most games are structured around a central theme, plot or school of thought that drives the action on. Unless you count the philosophy of Peppa Pig as a school of thought, then Fun and Games becomes little more than a collection of mini-games bound together by little more than a clumsy menu system and user interface. That said the overall universe of the show is well presented with all the characters in the Pig family making an appearance, and I’m sure this will be enough for the majority of youngsters who will be playing this game.

Despite referring to the “mini-games” on offer earlier, I must say that I was being very liberal with the term. The idea of it being a game implies that there is some sort of objective to meet or score to obtain. The “games” in Peppa Pig possess neither, usually revolving around some very basic stylus movements that produce a visual effect on screen. You flick bits of bread into the the pond and ducks show up. You Hold the watering can above the flowers and they grow. They’re all pretty similar and exceptionally repetitive. Tight gameplay mechanics and addictive design are not a part of Peppa Pig: Fun and Games.

For all the hating I’ve done on the gameplay of Peppa Pig, it must be admitted that the graphics and sound are a much stronger aspect of the package. After a few youtube views I now actually know what Peppa Pig looks like and I can safely say that the game does a good job of imitating it. The visuals aren’t particularly impressive in a technical sense, but that said this is a DS game we’re talking about. They’re pretty strong for a budget title however, being fun, colourful and faithful to the show. The sound is in a similar vein with the voices and sound effects coming straight from the show. The theme tune is also pretty damn catchy. 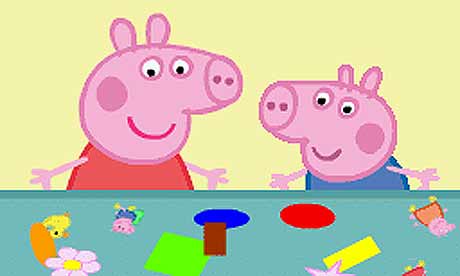 You drag with the stylus and the fuzzy felt drawing changes. That’s all there is to it…

The game has been released with a reduced price tag, but despite the cheaper point of entry, it is still hard to argue that it provides good value. There are eleven games in total, but each one only offers a minute or two of enjoyment at max. The lack of high scores prevent the games from having any replay value whatsoever. In terms of lifespan the game is practically dead on arrival and is unlikely to keep anyone over the age of four entertained for more than an hour.

So in all this concludes the first part of the review. I, as a pretty serious gamer, found Peppa Pig: Fun and Games to be devoid of fun. And devoid of games for that matter. The score is based on that, but that said it would be unfair to entirely judge Peppa Pig based on my standards, as the game is clearly not targeted at people like me. It is targeted at very young children who are fans of Peppa Pig. Seeing as how I don’t fit into this particular demographic and as I don’t have any family who fit the bill as well, a little bit of additional research was required. This obviously needs to be taken with a pinch of salt (or Peppa mwahaha), but a quick flick through amazon seemed to show a lot of happy parents who’s kids really enjoyed the game. In this sense if you are looking to buy the game for a younger family member who likes the show then it might just do the trick. If not then this game is best left on the shelf.

Presentation is clear and much like the show, All the characters are there in the game, kids who like Peppa Pig are sure to like it

Games have no objective or score, Gameplay is exceptionally repetitive, No central structure or story, Unlikely to entertain for more than an hour, Offers no value for money Final Verdict:
TERRIBLE
A game that to me seemed lacking in both fun and games, Peppa Pig: Fun and Games is unlikely to occupy many for long, but could still be a hit with the much younger kids
A copy of this game was provided by Developer/Publisher/Distributor/PR Agency for review purposes. Click here to know more about our Reviews Policy.