When I was told that the folks over at Atlus had mixed a social simulator with Jungian psychology into a JRPG framework, I laughed heartily at what seemed to be a rather ridiculous idea. I stopped laughing when I actually got to play it, and found it to be one of the best RPGs I’d played during that whole console generation. Having been released for the third time now, has Persona 3 still got what it takes to wow fans and newcomers alike once more?

The story is set in a fictional city in modern day Japan where our teenage hero (or heroine) has recently transferred for their schooling. They soon find out that a mysterious hour between midnight and one AM called the dark hour sees everyone transform into coffins each day. There are a select few who remain conscious during the dark hour, but their minds are prey for the evil shadows, the evil monsters that emerge during the dark hour. Our character soon discovers that they and a selection of school friends possess the power of Persona, a magical being that grants them the strength to combat the shadow menace.

Thus the band of heroes take it upon themselves to explore the shadows’ nest, the mysterious tower of Tartarus, and attempt to put a stop to the dark hour once and for all. It’s certainly an interesting scenario and the plot has enough twists and turns to keep you engaged. The characters too are well designed and entertaining and the whole affair has a very high school anime feel to it. The Jungian psychological concepts examined throughout the plot aren’t particularly subtle, but it certainly gives the story an interesting slant that beats the generic “orphans out for revenge against the empire” paradigm. 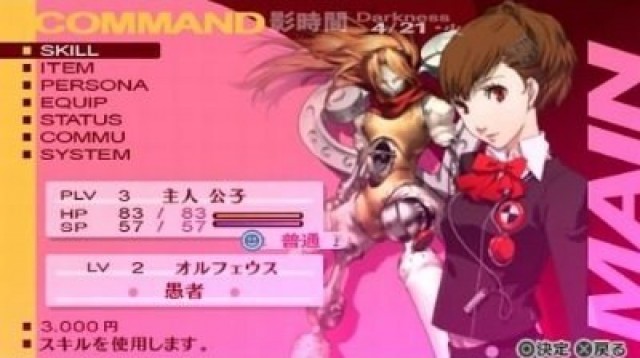 Hey look the menu is pink. Get it, because you’re playing as a girl? (Slaps face with palm)

Our heroes begin adventuring into the mysterious tower of Tartarus at night and must attempt to climb to the top in order to unveil the mysteries of the dark hour. You have to do a lot of combat as you make your way up, so it’s a good thing that the combat is easy to pick up and hard to master. Combat is a standard turn-based affair with a wide variety skills available to each character through their Persona. The main mechanic that separates the battles in Persona 3 Portable to other titles is the extra turn system. By landing a critical hit or attacking with an element the enemy is weak to they can be knocked down, granting an extra turn. You can keep chaining attacks across enemies this way until, when they are all knocked down, you can perform an all-out attack with your party that deals heavy damage to all enemies. It’s a simple system that has a surprising depth, and always keeps you on your toes. Several tweaks to the combat have been made for the new portable version of the game. For a start a defend command has finally been added. When you level up one of your main character’s Personas to a certain level they will give you a skill card that allows you to transfer particular skills between Personas. Possibly one of the best additions is the way that now, whenever your main character is about to be defeated in battle, one of your party members will take the blow in their place. This is exceptionally helpful as, unfortunately, Persona 3 is one of those games where if your main character is defeated the game ends immediately. The combat is fun aside from a few frustrating moments, but sadly can wear a little thin after a while.

It’s good then that the combat is accompanied by several other game mechanics that keep things fresh. For a start there is the Pokémon style collection aspect of trying to collect new Personas for your hero. Your main character has the unique ability to use multiple Personas and change between them during battle. You collect new Personas as you battle your way through Tartarus and you can merge Personas together to create new ones in the mysterious Velvet Room. As you mix Personas certain skills are passed down to the new one created. It’s a deceptively simple system, but is always entertaining trying to make each Persona with your favourite skills. It also goes a long way to keeping the combat interesting as you are always gaining new Personas with new strengths, weaknesses and abilities. 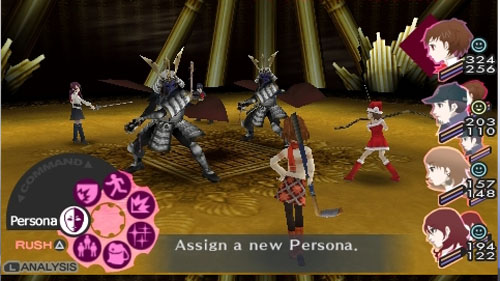 Turn-based battles: Love them or hate them, they’re here to stay

The game isn’t all about fighting however. Remember how I mentioned that the hero transfers to the local school? Well by day you have to attend school and are given the choice of socialising with your peers in your free time. It’s tempting to assume that the social elements of the game are a pointless distraction, but the characters you meet and interact with are interesting and are usually very well written. Increasing your social links also offers great combat benefits. Each friend you increase your social link with is associated with a particular arcana, or type of Persona. As you level up your bond with them, you find that when you merge Personas that correspond with their arcana, the resulting Persona is given a massive experience point boost that enhances their abilities. It’s the quickest way to level up and gain new skills, and you’ll quickly find yourself having to balance your social links with regular combat training as well as revising for those pesky exams that crop up from time to time.

The amount of depth in the game world is astounding, from all the places you can go and people you can meet, to all the things you can do. With all that goes on during the game it is a good thing that the interface has been so well designed for the PSP. The exploration of Tartarus plays out the same as ever, with a standard 3D perspective, but the exploration of the school and town has been stripped down somewhat. You now are given a top down view that looks a bit like a map with symbols representing places, people and objects of interest. You interact by moving a cursor to the relevant icon and hitting X. It sounds a bit basic, but it retains the same level of detail that was present in the PS2 version. I actually found it almost preferable to the standard 3D camera, as going through the menus makes navigating and moving around much quicker and easier.

A major addition to the portable incarnation of Persona 3 is the option to play through the game with a female protagonist as well as a male one. Playing through as the female character I found that a completely different experience was awaiting me. The social links you have the option of pursuing are completely different, and the new dialogue and ability to engage in social links with your party members really changed the game in a big way. It’s amazing just how much new content has been included in this way.

Visually speaking P3P is second to none. Aside from the town exploration being slightly stripped down the game looks practically identical to the PS2 version. The style of the visuals is also unique, with the bright vivid colours of the daytime successfully contrasted with the dark and gothic aesthetic of the dark hour. The enemy and Persona designs are still intriguing and well realised, and new Persona designs for the female play-through are a welcome addition. Some may find the static character portrait cut-scenes a bit cheap, but they do the job. I personally began to be annoyed by the interface changing to a hot pink when playing as the female protagonist. It just seemed a little bit insulting. Regardless of a few irritants, Persona 3 Portable remains one of the visually strongest games on the system. 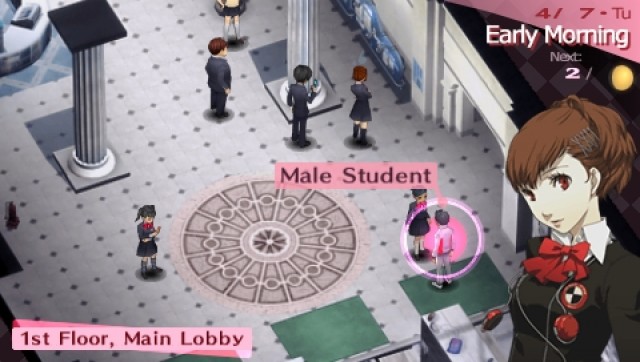 The interface may have been a little stripped down for the PSP, but it still retains the detail of the original

I was very impressed with the technical feats of the audio in P3P, with the game retaining the same voice acting found in the original for almost the entire game. It certainly helps you feel immersed in the experience and the voice overs are just as strong as they’ve always been. A lot of new music has been recorded for the new female perspective, but as impressive as this is, a lot of the music tracks are still really bad. It’s not necessarily a deal-breaker, but some of the hip-hop style tracks are quite embarrassing. It’s a shame that these get in the way of an otherwise fantastic aural experience.

The lifespan question is very easy to answer in the case of P3P. This game will last you for a long time indeed. There is so much to see and do and so much that you would miss on a first play-through that multiple run-throughs are a likely eventuality. Even if you’ve finished the original P3, the new tweaks and key differences when playing through as a female character will warrant you returning to the world of Persona 3 once again. With all the Velvet room side-quests, vast array of skills, items and equipment and the wide variety of social links Persona 3 is well worth the asking price. The original game was one of the best of last generation, and now it returns in its definitive form on the PSP. Even if you’ve finished it once already and even if you’re not a fan of JRPGs, Persona 3 is edgy and different enough to the point where I’d recommend everyone with a PSP pick up a copy.

Combat can get a little repetitive, Still not quite as good as Persona 4

Final Verdict:
EDITOR’S CHOICE
One of the best RPGs of the last generation arrives on the PSP, bringing with it a host of gameplay tweaks and enough new content to appeal to new blood and old fans alike
A copy of this game was provided by Developer/Publisher/Distributor/PR Agency for review purposes. Click here to know more about our Reviews Policy.