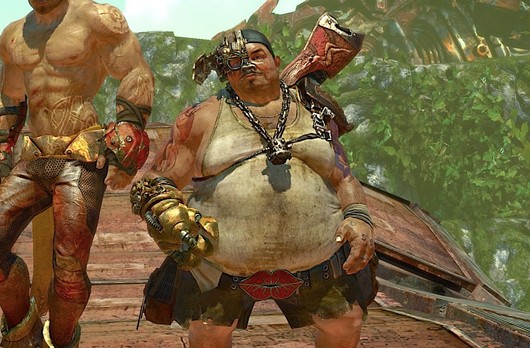 Namco and Ninja Theory have just revealed details about the first piece of DLC for Enslaved, called Pigsy’s Perfect 10, which is a side story of a new character named Pigsy.

Players will also be able to play in 3D with both the original game and the DLC.

Here is more information about Pigsy:

Pigsy, the comical porcine character known for his one-line zingers and questionable hygiene, finally gets his time in the spotlight. The Titan Graveyard is a lonely place and Pigsy really needs some companionship beyond the mechs that roam the area. He dreams of the perfect woman and embarks on a mission to build one from scratch using scrap parts he finds around the junkyard. In contrast to the main game which features strong, capable Monkey as the playable character, Pigsy is much more of a lover than a fighter. Pigsy’s gameplay will have a completely different gameplay dynamic, with a focus on stealth and sharp-shooting. He has plenty of tricks up his sleeves including a far-reaching hookshot, trusty sniper rifle, various grenades and devices, Trouble Vision eye piece and the aid of his trusty mechanical sidekick Truffles