PixArk manages to largely succeed, often in spite of itself.

PixArk is a remarkably easy pitch: Minecraft meets ARK: Survival Evolved. That’s really all there is to it: it takes the whimsical graphical style and crafting from Minecraft, and then melds it with the harsh prehistoric survival elements of ARK. The result is incredibly compelling- what starts out as a mere curio can become a bit of an obsession, as you spend hours upon hours slowly working your way up to the top of the food chain, beginning as a defenseless forager, to slowly creating fire, shelter, hunting, and then crafting better weapons that can not only help you hunt, but can also defend you against the more vicious predators that still roam the wilderness, and put you at the top of the pecking order.

However, it must be admitted that as compelling as PixArk can be, it manages that in spite of itself, because often, it feels like the game is trying to undermine and sabotage itself any chance it gets. A lot of this has to do with the fact that the game is technically still “early access”, so it lacks in a lot of polish and pizzazz that you can expect from a finished product. This means that the game is extremely glitchy (the most infuriating of which is when it decides to stop accepting any button inputs for no apparent reason), or suffers from random framerate drops, or makes the base PlayStation 4 system sound like it is a commercial jet about to take off. Undoubtedly, time will see more polish applied to the game, and we can expect these problems solved. But there are other issues, which seem to be more fundamental, and which hold the game back from true greatness.

The most obvious of these is that PixArk is ill-suited to consoles. It has an extremely unwieldy and clunky UI, with menus upon menus, which is very poorly suited for a gamepad. Given how much time you spend in the menus for one reason or the other (whether it be crafting, managing your inventory, or leveling up), this means that you will spend far more time simply trying to fight with the controls than you will be actually playing the game. Add to that the already mentioned frustration of the game randomly not responding to button inputs, and you have a recipe for disaster. 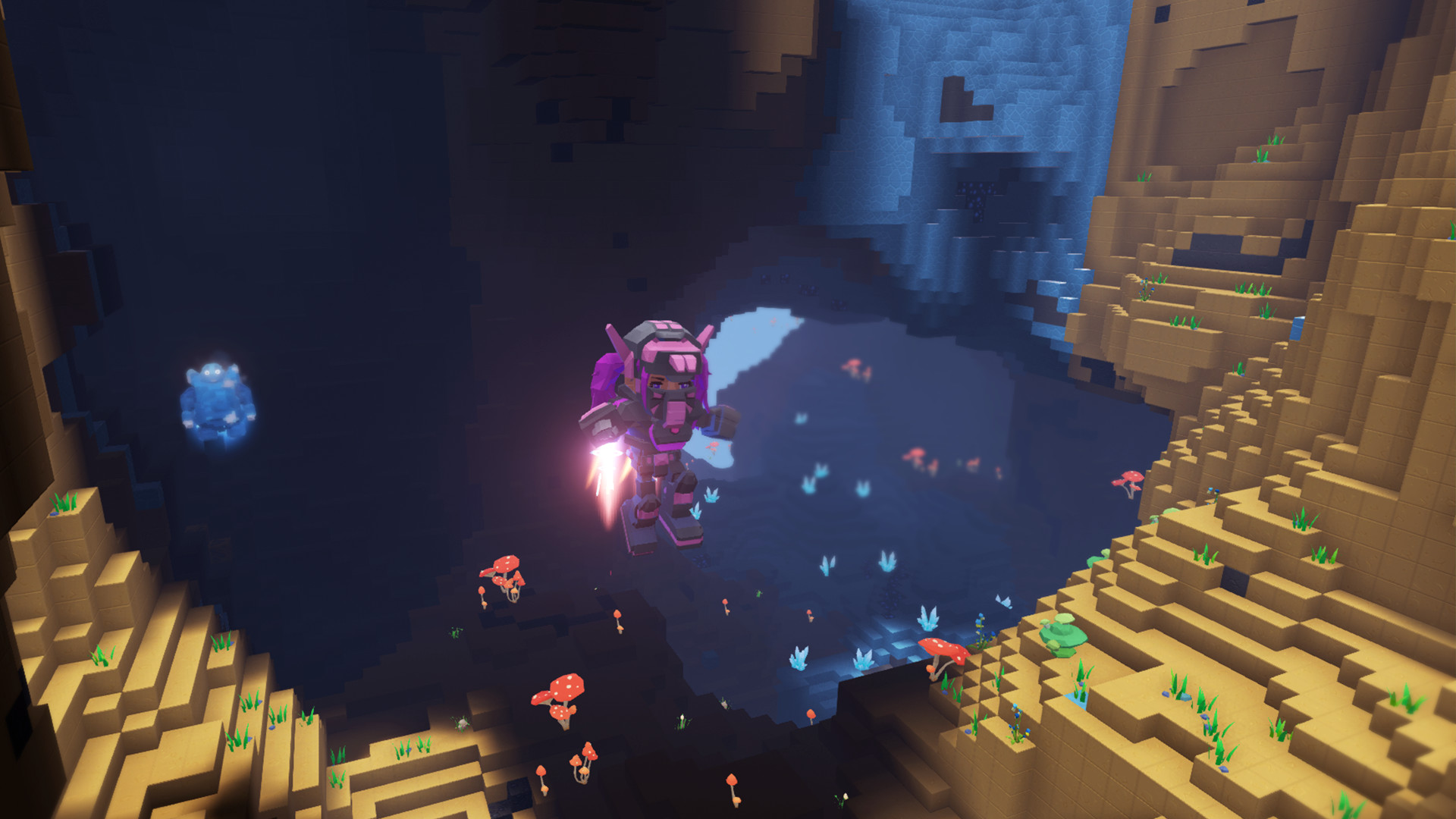 "It must be admitted that as compelling as PixArk can be, it manages that in spite of itself, because often, it feels like the game is trying to undermine and sabotage itself any chance it gets."

Other issues have to do with what the game is– for instance, it is a survival game, which means there is a lot to manage and take care of. You have to look after your stamina, thirst, hunger, and health, you have to make sure you’re not too hot or not too cold, you have to collect materials from the environment to craft tools to help you better cope with the world… this is actually not a complaint, because the game does this well. The complaint is that it never actually explains any of it. You are dropped into the world with absolutely no warning or explanation, and while there are pop up prompts that attempt to explain the controls, there is absolutely nothing that actually explains any of the mechanics, or even the HUD indicators. So, the game suddenly tells you you are hungry- and then you realize you can get hungry. Or it tells you you are too hot or too cold, but you don’t actually have any idea what to do about it. To PixArk‘s credit, the solution to all the problems is always in the world around you, and the enterprising player will enjoy slowly unraveling the yarn this game poses- but the game is extremely unfriendly to new players.

Consider the question of thatch- thatch is an extremely basic material you need for everything in PixArk. The game tells you you need it, particularly as you learn recipes for crafting more things- what it doesn’t tell you is how to get it. Do you have to cut down trees? That only gives you wood. You see grass all around you, but any time you interact with it, you seem to only get materials for the block it is on. You can press every button in vain trying to interact with the grass- I even had to pull up the controls to see what I was missing- in the end, it turns out that one button pressed when you don’t have anything else equipped and are facing grass will pull it out and give you thatch.

There is no tutorial that teaches you this. There is no indication that you can even interact with the grass (when you pull up the game’s highlight tool, it highlights the block the grass is on, but not the grass). You don’t even have any idea it is possible to interact with things beyond punching or attacking them. The game expects you to stumble around to figure this out yourself. And this is just one example- there is a quest system, but the game never explains it unless you go foraging in its menus. You can tame wild animals! But again, the game offers frustratingly little direction (though this at least is communicated better than most other things in the game are). 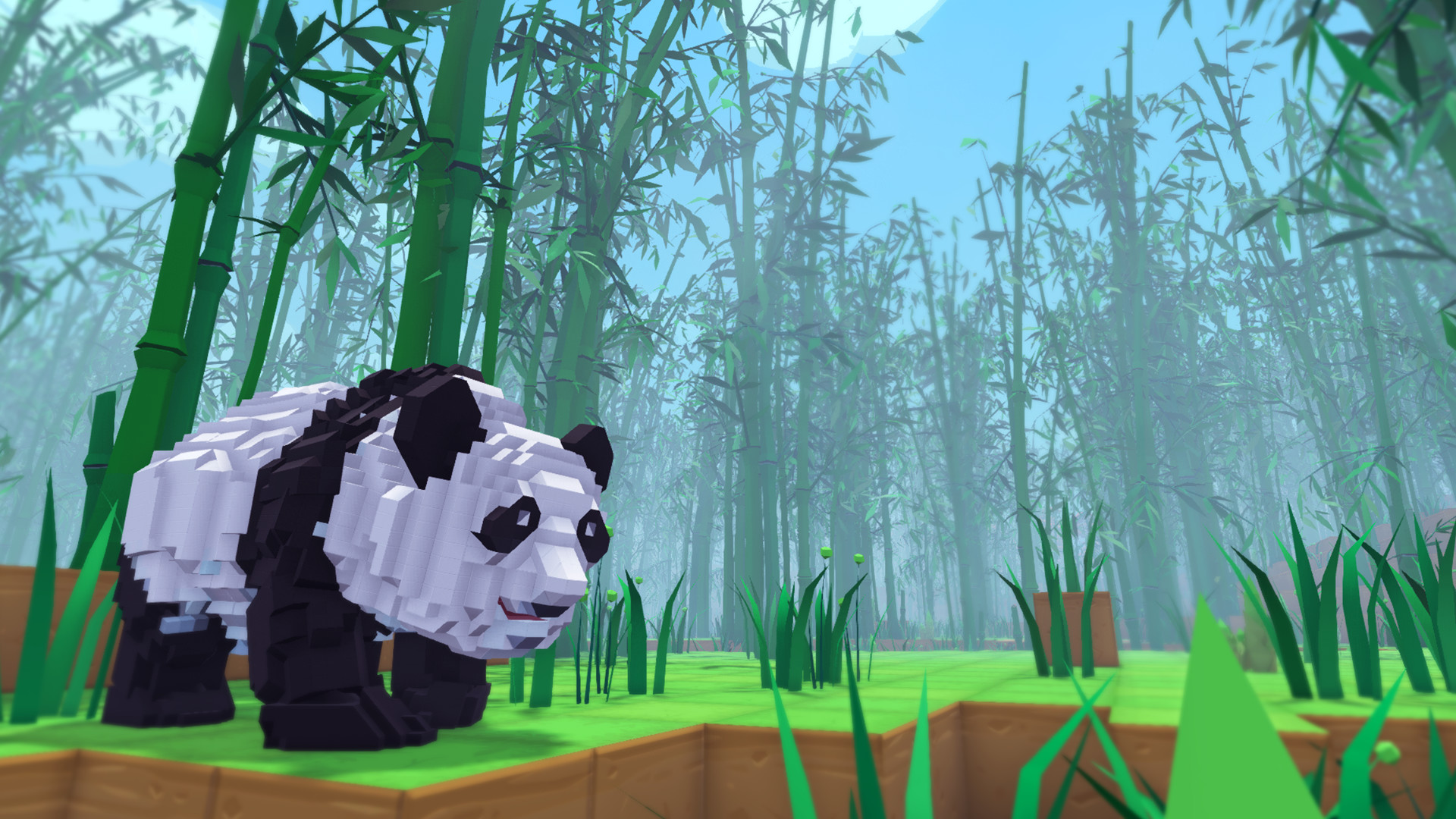 "Certainly, there is a sense of satisfaction the first time you hunt something down, or build shelter, or start a campfire, or build a weapon, and realize you are now empowered to take on far more than you ever could have imagined at the beginning."

Other problems have to do with the game’s procedural generation. You see, unlike, say, ARK, which puts you in a sort of “safe zone” sandbox as a tutorial area for you to learn the grips, PixArk randomly generates and populates the map each time you play. So, you could very well just end up on a map populated with all manner of aggressive, high level creatures you don’t have much recourse against. Generally speaking, the immediate starting area always appears to be “safe”, but venturing too far out in any direction can land you in trouble, which means that for the longest time, your best bet is to hunker down and grow before you take on the big bad world.

And yet, in spite of all of this, the game remains compelling. Maybe it’s the charming and blocky graphics. Maybe it’s the inane but sweet music. Maybe it’s just the simple notion of (wo)man versus the world, and knowing that while you literally start out with nothing, you are slowly watching yourself become better equipped to take on the wilderness, and living through a microcosmic representation of humanity’s progress through prehistory, to agriculture, metal, industry, and beyond. Maybe the hostility of the game towards the player actually compounds the sense of conquering adversity and prevailing against the odds. Certainly, there is a sense of satisfaction the first time you hunt something down, or build shelter, or start a campfire, or build a weapon, and realize you are now empowered to take on far more than you ever could have imagined at the beginning.

The PvP element also helps. See, the world is populated by other players, too. You can join them and form tribes with them, which is great, but these players can also be jerks, and keep hunting you across the map and killing you- and that further adds to the sense of adversity.

PixArk has a lot of problems. To be honest, actually playing it can feel like a battle of attrition, because the game seems to be trying its best to wear you out. While you can explain some of these problems away thanks to the game’s “early access” label, others are harder to forgive or excuse. And yet, it’s a hugely compelling experience, especially for those who like survival games, or for example, kids versed in Minecraft. It’s got a lot of problems, and you should be aware of them- but if you are, and if you can grit your teeth and work your way through them, the final experience is oddly rewarding and engaging.

Density of mechanics, with a lot of different things going on for the player to keep track of and manage; thoroughly satisfying survival game, as you learn the grips and become more and more empowered to take on the world; addictive central loop; charming graphics

Obvious lack of polish; the controls are terrible, and very poorly adapted to consoles; the UI, menus, and inventory are absolutely awful; the game is extremely glitchy; the absolute lack of tutorials means players are literally stranded with no idea on how to deal with things

PixArk has got a lot of problems, and you should be aware of them- but if you are, and if you can grit your teeth and work your way through them, the final experience is oddly rewarding and engaging.

A copy of this game was provided by developer/publisher for review purposes. Click here to know more about our Reviews Policy.
Tagged With: nintendo switch, pc, PixArk, ps4, Snail Games, Xbox One