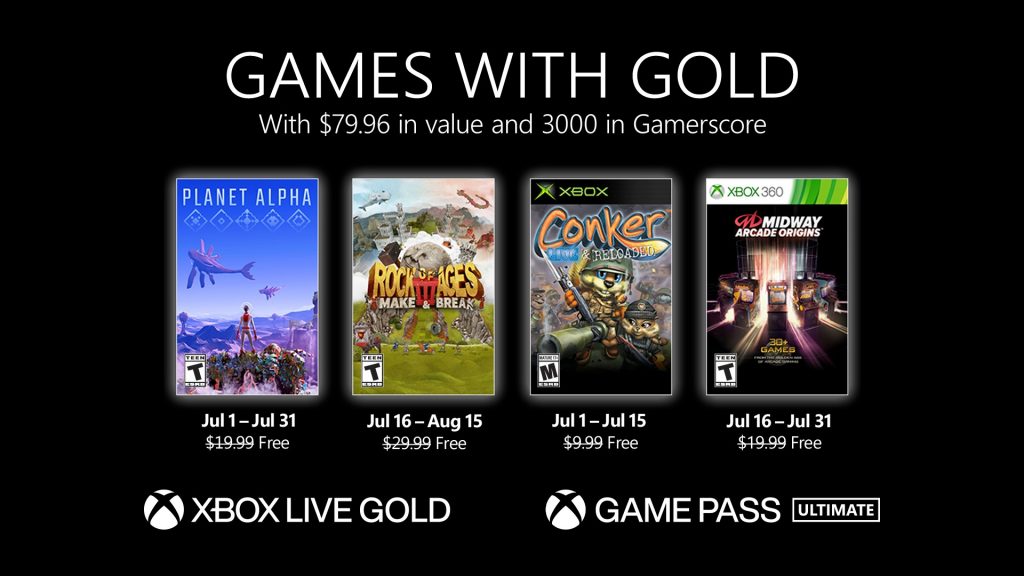 Somehow, June has mostly come and gone, which means July, and its Games With Gold, have been revealed by the folks at Xbox. It’s shaking up to be a solid month, with four games spread across July. Two of the games will be Xbox One and Xbox Series X|S titles, while another two will run via backwards compatibility. The Xbox One and Xbox Series X|S titles are Planet Alpha and Rock of Ages 3: Make & Break, while the backwards compatibility titles are Conker: Live and Reloaded and Midway Arcade Origins.

In Planet Alpha, players are marooned on a strange planet and will have to venture through beautiful and dangerous environments to unlock the planet’s secrets, escape relentless enemies, and harness the power of both night and day to survive. Rock of Ages 3: Make & Break combines a sprawling story with wild takes on legendary characters from history and fiction. Players can also design, build, and share custom levels with friends in what is both a ridiculous tower defense and arcade games.

Conker: Live and Reloaded is a remake of N64 classic Conker’s Bad Fur Day in which players guide the foul-mouthed squirrel through a “raunchy world full of twisted characters, innuendos, and outrageous movie parodies.” Midway Arcade Origins, meanwhile, collects more than 30 arcade games including Defender, Gauntlet, Rampart, and more, without requiring any quarters.

You can watch a trailer for this month’s Games with Gold below: