Initially I was skeptical on how good this game would actually be, and I must say that I had basically predetermined my decision based on the history of mini golf games. It wasn’t until I actually played the first few holes that I realized I had made a grave mistake doubting it. Planet Minigolf is actually a decently fun game with cartoony but stimulating visuals. Normally mini golf games are just very boring and never trying to test the limits. In fact the only really good golf games that took a less than serious approach was the Hot Shots franchise.

Planet Minigolf takes mini golfing to a whole new level and gives the players a new fun and exciting way to play. The levels are just over the top and super fun. In the demo you get to play a few holes on the first location which is tropical and pirate ships. Each course is based on a different location around the world, which makes for a lot of fun. 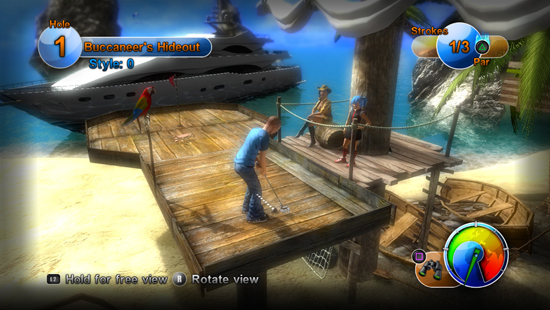 Players can collect power-ups on the holes, but you have to use them strategically as sometimes they lead you away from the hole. Some of these power-ups include the magnetic upgrade which basically sinks your ball instantly, and there is always the speed boost power up. Probably my favorite though is the control your ball power up, it felt like in Space Jam, I was able to turn the ball any direction and aim it right for the hole. There is something fun about this game and I can’t stop playing the demo.

Players, from my under standing can customize many different thing about there characters from looks, to names, and everything else in between. Customization has almost become a must in most casual games like this. The character they give you in the demo is an interesting average Joe character, goatee equipped.

There is fun and humorous commentary set up so that it almost feels like mini golfing is a professional sport. I love the way the game feels, I almost feel like I’m on television, in a mini golf tournament. They always encourage you when you’re doing well, and unfortunately I found out several times, they also like to let you know when you’re not doing so hot. 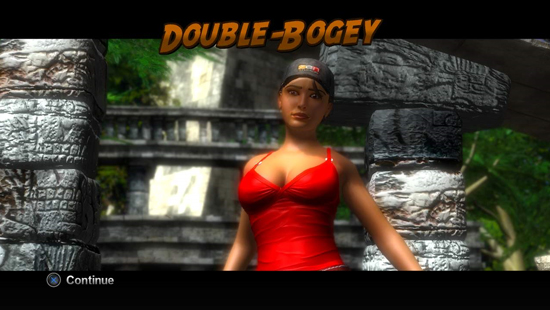 You have to use the left analog stick to swing and even though it does work decently, I still feel like there could have been a better way. It accomplishes the job most of the time but there where a few situations where I just couldn’t get a hold of the power concept and either over shot on accident or under shot severely.

The sounds are good and everything about this game was done a thousand times better than I have ever imagined it to be. I can’t wait to buy the full version and get the full review up. So if you’re interested in a new style put-put game than Planet Minigolf in my opinion, may be the game for you.