With Mastertronic now engaged with PopCap in a distribution deal covering the UK, many of PopCap’s games are getting a re-print in a new edition. Plants vs. Zombies has been given such a makeover with game of the year edition discs now circling around your favourite retailers. With the game now being nearly two years old, is it still relevant and worth your cash?

Some games just seem like they’re going to tickle your fancy before you’ve even played them. PVZ is one such game, with a title that instantly grants you insight into its jovial and humorously ludicrous aspects. The main premise involves you planting various foliage on your front lawn to push back the zombie horde and prevent them from invading your house. You need to utilize various plants that each posses unique abilities ranging from offensive firepower, defensive walls and plants that give you sun energy that is require to plant even more greenery. The Zombies too come in different varieties that give them different abilities, strengths and weaknesses. With only a limited amount of plant types you can take with you to each stage and a vast amount of positions you can place them on your lawn, the strategy comes thick and fast. 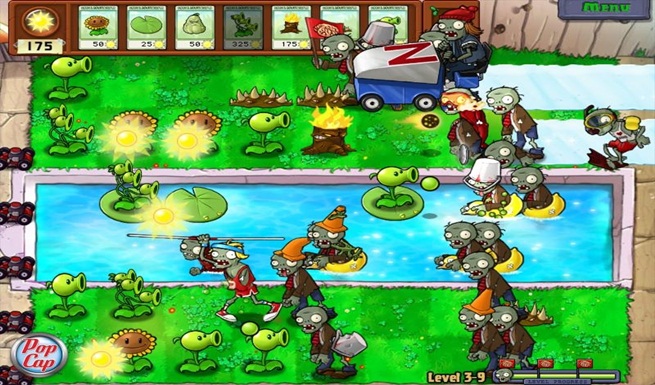 The strategy is deep, yet accessible

What Plants vs. Zombies does very well is maintain a deep yet accessible game mechanic throughout. As a self-professed “core” gamer I was able to find a real strategic glee in setting up the perfect lawn defence but, on the other hand, I also found many of my non-gamer friends enjoying the game in a similar manner. Any game that can appeal to both the casual and hardcore audiences deserves a medal for sure.

One of the things that makes Plants vs. Zombies so instantly appealing is its aesthetic value. The graphics are pretty good for a casual game, and the bright and vivid sprites bring a certain life to the never ending battles between the undead and mother nature. The catchy tunes as well serve to draw you into the action, and the sound effects and voice clips for the zombies are absolutely priceless. There’s not a lot they could do wrong with the premise in terms of its visual presentation. It just works well, and will bring a smile to even the most stony of faces. 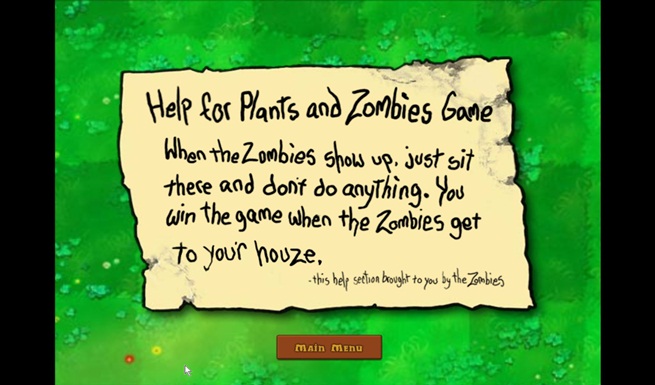 The humour might not be subtle, but it does hit the spot

The core aspect of PVZ is the main adventure mode. You go through a series of levels one by one, learning about each plant’s function bit by bit. The mode has a great sense of progression, drip feeding you new plants and zombies at a quick enough pace to keep you guessing. Despite these well timed gameplay additions the mode can become repetitive over long periods, offsetting the usually addictive nature of PVZ. The problem is one of gameplay pacing. Whilst the later levels introduce huge waves of zombies to contend with and a wide variety of greenery and other obstructions you can concoct, the early parts of the game begin very slowly indeed. There is also the issue of the way every level starts. As you need sun in order to plant your green walls of defence, there is a usually a slow start that accompanies the beginning of each stage as you only start with a little bit of sun for each level.

The Adventure mode is notable for its rather impressive length. Whereas other games in the “casual” sector tend to rehash the same level multiple times, PVZ has a decent amount of levels in its core adventure mode with a nice spread of mini-games throughout that help liven up the proceedings. There is also a puzzle and survival mode you can unlock as you progress through the adventure levels that add even more to the game’s longevity. The big problem I have with the quantity of content in PVZ is the meagre nature of the additions made to the game of the year edition. With only a zombie avatar creator (which is actually mildly amusing) and a few achievements here and there, the GOTY edition of PVZ is rather unnecessary. That said, PopCap have announced that users who already own a copy of PVZ can upgrade to the GOTY addition for free. It still felt cheap though as, you’d think with it nearly reaching its two year anniversary, PopCap would’ve been able to add some new levels or game modes. 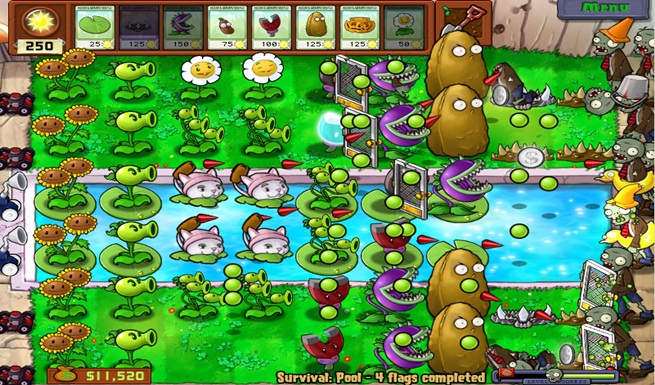 Plants vs. Zombies has been out for sometime now and, even though the GOTY additions are a little disappointing, the game is still worth your hard earned dosh. The GOTY edition of PVZ should be thought of as more of a re-issue than a proper expansion so, for the meagre price of £8, there is no excuse for missing out on this enjoyably unique take on the tower defence genre if you have yet to experience its charms.

A slow start to the early levels, Can get a little repetitive in long bursts, Not much new content in GOTY edition

Final Verdict:
SUPERB
Adding a unique and comic flair to the standard tower defence formula, Plants vs. Zombies is a game that exudes quality and style in spite of a few pacing problems
A copy of this game was provided by Developer/Publisher/Distributor/PR Agency for review purposes. Click here to know more about our Reviews Policy.