Fast gun-play and a looting fiasco can only be enjoyable for so long.

Platformines is a 2D platforming game that blends exploration, looting, and gun-play with that of RPG elements. While the game is weak on story and is largely forgettable within the time frame of ten minutes, this is not where Platformines places it experience, nor does it try to reel in the player. This is by no means an excuse for weighing out the pros and cons of that between story and gameplay, it simply serves as a reason for the gameplay, otherwise it’s just a pointless adventure.

Long story short, the underground world in which you explore, known as the Robodig has almost come to an end, by what seems to be at the hands of some mercenary militant force. In order to rebuild the Robodig and restore it to its normal state you must explore the mines and find items and treasures. Filled with grunts, booby-traps, bats, and star like drones you must hop, run, and shoot your way to safety in order to reach locations and fulfill objectives.

Gameplay itself is an enjoyable experience largely due the nature of its randomly generated world. The looting aspects of the game along with the method in which the objectives are presented to you however are a mixed bag. Platformines feels at times like it’s overdoing much of the different game elements it attempts to combine. As the world is filled with a vast amount of flying enemy types and moving traps which has you jumping a lot of the time, which is where the ability to jump up to six times in a row benefits this player.

This is offset however by the player’s ability to accurately navigate where he or she is going since you only have a limited field of view in which you can see the level. This is indicated by a glowing bubble around the player that increases and decreases according to the player’s level of health. 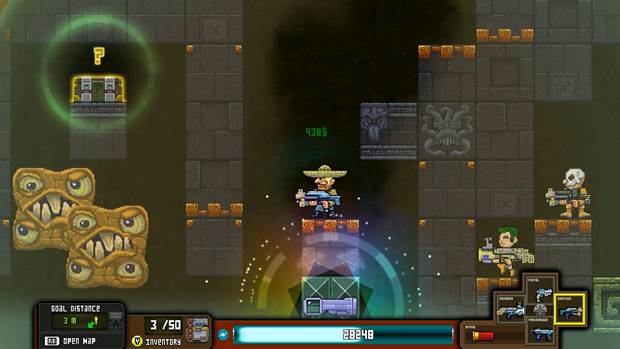 " Don't get me wrong I don't knock challenge and I have no problem with the enemy being more tactical or stronger than the player, I don't think anybody should see this as a problem. It just appears to be somewhat off-balanced and could have been better thought out, particularly when shooting while jumping is the only way to go."

This idea seems to work better in theory since a lot of the platforming you do often has you falling a couple feet between the unforeseeable platforms in the distance. This in-turn impacts the player’s health so it can be somewhat of a bother when traversing the world. The good news however is engaging enemies in this awkward yet interesting world can actually be fun in a strange sense.

It doesn’t always feel accurate though when firing your guns, and the constant hopping when attempting to dodge enemy fire can sometimes feel to be fairing more to their advantage. Don’t get me wrong, I don’t knock challenge and I have no problem with the enemy being more tactical or stronger than the player, I don’t think anybody should see this as a problem. It just appears to be somewhat off-balanced and could have been better thought out, particularly when shooting while jumping is the only way to go.

What’s good about the shooting mechanic and does well at attempting to counter the problems with accuracy and the enemy hit-detection is the ability to shoot in any direction, which is done by the use of the mouse. Avoiding enemy encounters doesn’t serve you any favors neither since the chance of running back into them due to exploration means you’ll eventually have to deal with them.

The weapons available to use consists of a shotgun, pistol, machine gun, and a launcher, so the variation here is just about enough to keep the player engaged. Looting in Platformines is a prominent and continuous feature and this is where the game holds the majority of its enjoyability. Treasure chests are scattered throughout the level and fallen enemies leave behind pick-ups for you to take.

Everything available in the game for the player to find or purchase aids in upgrading the player’s movements, weapons, and appearance. I didn’t find the aspect of looting to be an addictive feature like I do in other games, but I sense this was due to my overall liking to the game and how much of it I was willing to engage with. Those that find other aspects of the game to be more enjoyable than I do will undoubtedly have fun in looting and the sense of discovery that it holds. 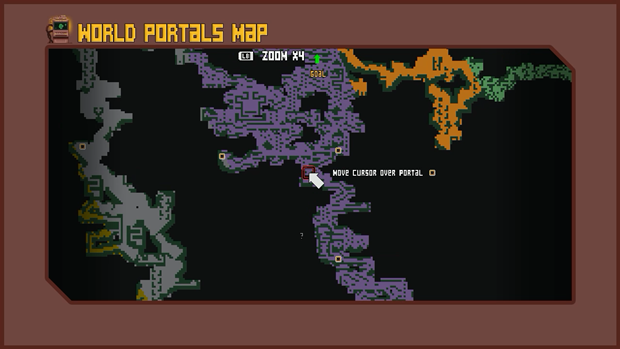 " I find the visual qualities of most 2D platformers these days to look great in general. It feels like a homage, or a matter of paying respect to the games that where released in the late 1980s and early 90s, and the high-definition overhaul and increase in colour range that they deliver to be something of a marvel. "

Along with sheer size of the randomly generated world are three difficulty levels that are unlocked by completing the one prior. This adds replay-value that was already present by default and I imagine players will be happy with this. Platformines follows the same 16-bit 2D retro style that most platform games seem to be using these days, and it looks great.

The colours are enough to keep you happy and the animations of the character and enemies in the game are at a level that’s pleasing to look at and engage with. It has a rich aesthetic to it that I find to be quite common with most 2D platformers, even the ones that suck on delivering good gameplay. I find the visual qualities of most 2D platformers these days to look great in general. It feels like a homage, or a matter of paying respect to the games that where released in the late 1980s and early 90s, and the high-definition overhaul and increase in colour range that they deliver to be something of a marvel.

I don’t think it’s fair to say or even categorize games of this type to be labeled as “Indie” at this point considering they all seem to be more enjoyable, affordable, valuable, and often played at longer durations than that of the Triple-A blockbuster titles that seem to be repeating themselves and not bringing anything new to the table, unlike these so-called “Indie” games.

I feel that the big Triple-A games have something to fear from these smaller titles and should see them as a threat, particularly in the case of innovation, originality, and the old-school throwbacks of gaming that a lot of people grew up on. Let’s face it, whether or not these games reach the level of visual style and graphical quality to that of something released by NaughtyDog or Konami, that visual style that these games do carry are what people seem to be raveled in.

What happens when the graphical limits of a game are outweighed by the budgets available, and the gameplay is largely the same as every other £50/$60 game on the market? That’s when you realize how much the gameplay actually matters. Customization in Platformines is satisfying enough in that it remains basic while playing on the humorous qualities to that of action-hero tropes. 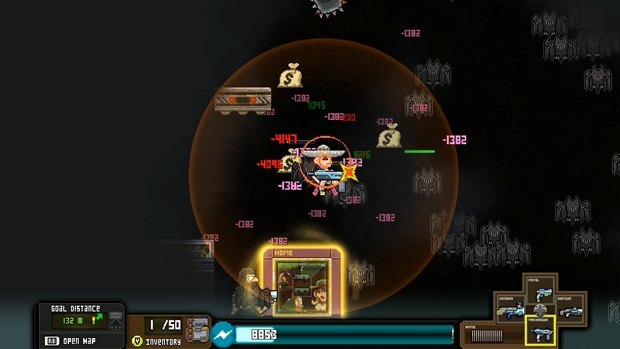 "Options such as an exaggerated jaw structure, chiseled chin, coloured mohawks, and obscenely large noses make customizing the appearance of your character something to laugh at. The only problem with this is that it doesn't provide enough options for being distinct."

Options such as an exaggerated jaw structure, chiseled chin, coloured mohawks, and obscenely large noses make customizing the appearance of your character something to laugh at. The only problem with this is that it doesn’t provide enough options for being distinct. This is a shame in contrast to what I felt is the main focus of the game, which is its randomly generated worlds that do so well at keeping the game experience fresh. What’s also a great addition to this is that the amount of choice increases as you find items within the game. Items such as hats, energy belts, health pills, gun types all vary in their effect with the player’s use-case.

These are also accessible by visiting the in-game item store. I found the controls to be quite off-putting when playing with that of a mouse and keyboard, luckily the game provides options to play with a gamepad which makes the experience far more enjoyable than that of the default configuration. Due to the awkwardness of the gameplay itself primarily when engaging in enemy gun-battles, the aid of the gamepad doesn’t change the experience enough to differ from using a mouse and keyboard. It only makes traversal more pleasant.

Platformines serves as an interesting experiment as to how games in the indie genre, mix different gameplay elements such as looting, customization, and level exploration, with that of shoot ’em mechanics when being placed in a 2D platformer. While the game has a few kinks here and there it’s by all means enjoyable once you get used to how the game plays. That being said, the game did feel cramped at times and would do well to simplify itself in terms of its gameplay elements, and maybe reflect upon some of its own ideas.

Final Verdict:
FAIR
With plenty reasons for replay value I can't see why player's wouldn't want to prolong the experience. Tedious combat that's mostly unavoidable.
A copy of this game was provided by Developer/Publisher/Distributor/PR Agency for review purposes. Click here to know more about our Reviews Policy.

343 Industries' community manager Brian Jarrard says that the super punch glitch being exploited by players in...

"All decisions about the final product are up to Nintendo. So feel free to send your requests of 'release the ...

The patch also fixes various progression blockers, corrected an EOS SDK error on PC and made the Parry Counter...

To be more accurate, it shows Joel and Ellie with their backs to the camera, looking on at an ominous crashed ...

Sony Has “Exciting” and “Fantastic” Ideas for Future PS5 Updates