Posted By George Reith | On 12th, May. 2011 Under Reviews | Follow This Author @GNReith

Some things work great on paper, but don’t really succeed when realised practically. Communism for instance (ooh controversial.) The idea of some of the most beloved platforming heroes on the PS2 joining forces in a single game sounds like quite a spectacle, but it just isn’t. Get any ideas of grandeur out of your head right now. PS Move Heroes is nothing more than a standard mini-game compilation and, though it is reasonably well put together, it is an entirely uninspired package.

The story revolves around some aliens abducting Sly, Ratchet and Jak from their home worlds so that they can compete in some sort of game show. Respective side-kicks Bently, Clank and Daxter are also brought along for the ride. It’s a poor excuse for a story that just stinks of a concept that has been shoe-horned into existence. Some of the dialogue in the cut-scenes is respectful of the source material on which this game is based, but the way the game is presented does not fit with the characters involved. The game just comes across as very kid orientated. The patronising tutorials, over the top commentator voices and needlessly cute alien NPCs seem far too “kids game” for my liking. Considering those who grew up on Sly, Jak and Ratchet and Clank must now be nearing their twenties, aiming this game so blatantly at the family audience was a major mistake. 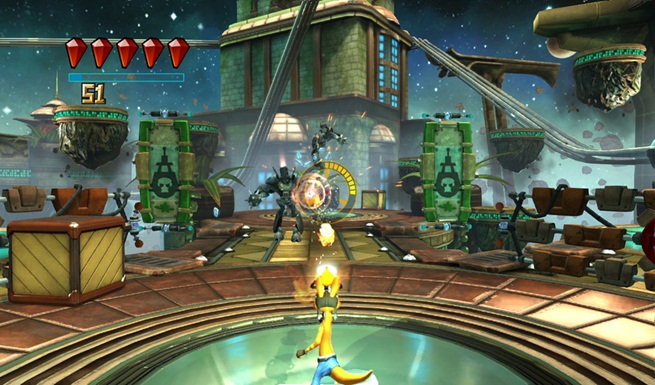 The shooting games, like the entirety of PS Move Heroes, are bland and uninspiring

The game itself takes the form of a variety of mini-games. Predictable, I know. They initially seem well stocked and varied, but you soon realise they fall into a repetitive pattern. There are two main types of melee games, either using a whip or the chosen character’s standard close range attacks. These tend to have mixed objectives, but you still pretty much just take out legions of robot enemies. These particular games are the worst of the lot with dull and simplistic enemy AI robbing the games of challenge, and unsatisfying and loose motion controls robbing the games of fun. You have shooter games that just feel like a generic third person shooter using the Move as well. They aren’t bad as such, but you still just wind up shooting lots of robots and there isn’t anything at all interesting or unique about them. The final game types are the bowling and disc-throwing games. These are easily the most enjoyable of the lot with the Move controls working well, and actually adding to the experience. You can change the flight path and direction of the disc or ball after you’ve thrown them by pointing the Move wand, leading to some satisfying near misses and full circle turns.

As you compete in these games you can hunt down collectibles that are hidden in each level. These can then unlock you new costumes for each character, a boon that will somewhat lengthen the game’s play-time. You also get different medals and awards based on your scores and, on the less tedious challenges at least, it may get you going back to up your high score. The presence of online leaderboards will also please the competitive amongst you. The game has a reasonable lifespan even if you ignore the above features, with a decent amount of challenges to plough through. The problem is in the repetition. The challenges themselves become monotonous and the levels too, despite trying to mimic the main characters’ very different home worlds, are incredibly dull and lifeless. The character choice also means very little as, aside from a re-skin and a single special move unique to each character, they all control the same. These special moves often go unused considering how easy the game is, but at least they offer some reason to choose one character over another. 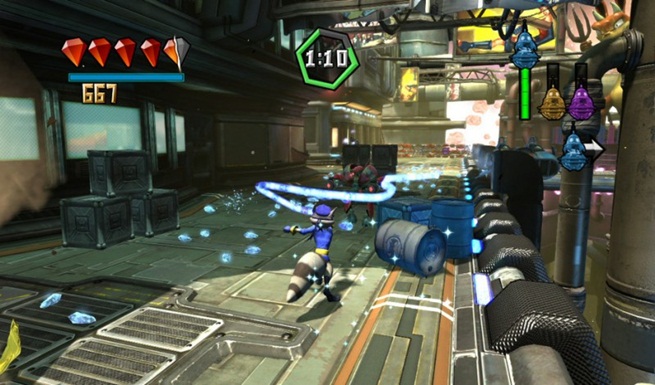 Cracking a whip in real life should be really awesome, so how is it so unresponsive and lame in PS Move Heroes?

The big problem with the gameplay in PS Move Heroes is the confused direction it takes. It’s mini-game and high score structure imply it to be a motion controlled party title, yet the game has an incredibly slow pace and very boring multiplayer modes. You can throw in a second player who can shoot enemies for you with an additional Move wand, but they have such a limited ammo supply that it’s honestly not worth bothering with. The plodding nature of the challenges also prevent them from having the “one more go” sort of feel that many popular mini-game compilations have to thank for their success.

When all looks at its bleakest, at least the presentation is good. The visuals deserve praise for their high production values. There’s no doubt that the levels and character models all have a degree of polish to them. My only criticism is how they rendered Sly, but this is more due to my personal love of the cel-shading effects in the Sly games on PS2 rather than any technical deficiency in-game. The audio is good as well, but the narrator’s voice is rather cringe-worthy. 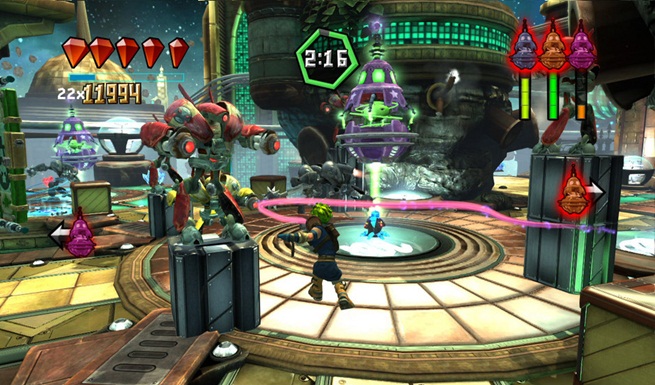 When all else fails, at least it looks nice

I can normally respect games that only just fail to cut the mustard but, with a premise as strong as Playstation Move Heroes, the flaws are all too glaring. Considering this is Jak and Sly’s first unique appearance in a PS3 game, I can only feel angry and disappointed that their PS3 debut was so mediocre thanks to PS Move Heroes. Moderate is the only way to describe the game. It will be forgotten all too soon, and we should just leave it that way and move on with our lives.

A nice attempt at a motion controlled action title that is marred by repetition, irritatingly slow gameplay pacing and a confused used of some of the most beloved Playstation exclusive platforming characters

A copy of this game was provided by developer/publisher for review purposes. Click here to know more about our Reviews Policy.
Tagged With: Playstation Move, Playstation Move Heroes, ps3, sony